You are here: Home / Articles / Tips for making plan for future 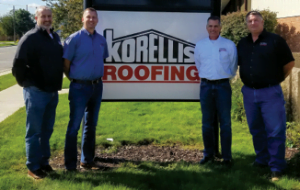 Pete Korellis knows his business and those who work for him will be taken care of long after he decides to step away from his company.

He recognizes succession plans are vital for entrepreneurs to ensure their businesses thrive in the future.

“A well-thought succession plan is one of the most important things a business owner will ever have to do,” said Korellis, president and CEO of Korellis Roofing in Hammond. “It prepares your company for the next generation of leadership.

“Without a good succession plan or without putting the right people in leadership positions, most companies do not survive the next generation.”

Kevin Kruggel, partner at Kruggel Lawton CPAs, said entrepreneurs work hard to build their businesses, so it’s important to protect their families in case of an accident or illness because it might create instability within the business.

“Why spend all that time working so hard building it if you are not protecting it ultimately,” said Kruggel, whose firm has locations in South Bend; Elkhart; St. Joseph, Mich.; and Knoxville, Tenn.

When it comes to a succession strategy, Region experts and entrepreneurs have taken different approaches to overcome planning hurdles and pave the way for a company’s future success by putting together and maintaining a transition blueprint.

Paul Applegate of Applegate & Co. CPAs in Michigan City said there are three routes for succession planning: selling or transferring to family or longtime employees or selling to an outside buyer.

“The first step is a conversation,” Applegate said.

He said, if the business is staying within the family, his team assists with putting together—along with an attorney—the initial structure of the transaction and helping get it down on paper.

“At this point, we need to bring the kids in to talk about the concept and figure out: Do you even want to do this?” Applegate said. “I have seen headaches if that happens, and it’s better to know up front if the kids are in or not.”

He said, if the next generation is in the family, the children need to have “some skin in the game.”

It’s a concept that he has used with his own business and children: Blake and Megan.

He recommended a client put into place a buy-one-get-one-free stock program. It not only helped make the client’s company more affordable but also spurred a sense of ownership.

“You can’t just hand the company to your kids as they have to have something to lose if it doesn’t work,” Applegate said. “When my kids initially came back to the company, I gifted them a small percentage each and said this is a gift, but the rest you have to buy.

“If the next generation doesn’t have skin in the game, the chance of long-term success is diminished.”

Kruggel said the biggest thing to stress is that every plan is individualistic to the particular owner.

“No two plans are the same,” Kruggel said. “The first thing we do is understand our clients and what their goals are for their businesses.

“If they want their successors to be family members, it looks a lot different to transition to family members or longtime loyal employees than trying to maximize value by selling to a synergistic buyer.” 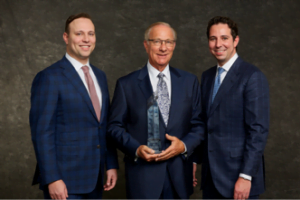 Dean Rothschild, center, with his sons Adam, left, and Rob, of Rothschild Agency Inc. of Merrillville, shown here at the Independent Agents award ceremony, didn’t want to pressure his sons to take over the business. Ultimately, his succession plan relies on them. (Photo by John Bragg)

“Through my own experience, I have friends and acquaintances who were driven by their parents into the family business,” he said. “I wanted to let my sons make their own career decisions. They knew we had a family business, and if they were interested, that was fine.”

Both sons tried different career paths before deciding to work with Dean at the full-service general insurance agency, which concentrates on middle-market commercial insurance.

“I am very fortunate to have a strong line of communication with them where we are able to share both the positive and negatives with one another,” he said.

Kruggel said business owners need to be objective when they decide whether family is the right fit for taking over the company.

“I have seen cases where the next generation really isn’t capable and then they run the business into the ground. It would have been better for the whole family dynamic if they had sold it to an outsider,” he said. “If you have questions about it, your outside professionals may be more objective when looking at the next generation.

“A professional skilled management team can spend time coaching the kids and educating them properly to run the business.”

For Korellis, his son took a different route in life—joining the Army—so Korellis is carrying on his company through an employee stock ownership plan.

“After years of planning and preparation for an inevitable succession of leadership, we decided on an ESOP. Korellis Roofing is now 100 percent employee-owned, and the entire management team is still in place,” he said. “My role has not changed. I intend to be president and CEO until sometime in 2021. An ESOP fits very well with a company that is closely held, profitable and not very marketable.

“The ESOP suits our team very well. It reinforces the ‘family’ culture that my father, George Korellis, started. It also provides the potential of incredible retirement opportunities for the employees who have helped us get to the top of our industry.” 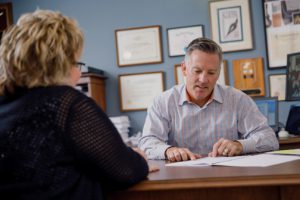 Kevin Kruggel, partner at Kruggel Lawton CPAs with locations in South Bend; Elkhart; St. Joseph, Mich.; and Knoxville, Tenn., works with companies on planning for the future. Kruggel said the biggest thing to stress is that every plan is individualistic to the particular owner. (Photo provided by Kruggel Lawton CPAs)

At minimum, Kruggel recommends having a contingency plan in place at an early age in case of a sudden event. This could include life insurance as well as who would take on leadership roles within the business if something happens to the owner.

“You should have an immediate plan in place in case some type of tragedy occurs,” Kruggel said. “Not having a contingency plan in place is one of the biggest mistakes. People are so busy working in their businesses, they don’t work on their businesses or succession plans. It’s too easy to say I am only 30, but you never know about an unforeseen circumstance—you have to at least do the minimum.”

Rothschild says entrepreneurs need to embrace the inevitable and the effects of the owner no longer being in charge.

“If you have been in business for 35 to 40 years, you may lose your edge or not wake up tomorrow or with a disability, that is a concern for the business itself, employees and clients,” he said. “I think any small business owner needs to be realistic and take into consideration that they need to create at least the minimum what if plan: What if I can’t work tomorrow?”

Ideally, Kruggel said about 10 years before retirement is a good time to begin to nail down specifics of a plan.

Applegate said succession planning is not something that can be done overnight.

“It takes a lot of time,” Applegate said. “If it’s an outside person (you are selling to), you have to find that person, negotiate the transaction and draw up the legal paperwork.”

Korellis said, while his company’s formal succession into ESOP started Jan. 1, 2018, it had been in the works for five years.

“If you start considering a succession plan because you actually need one right away, it could be too late,” he said.

Kruggel said, once a plan is in place, entrepreneurs need to be mindful of adjusting as time goes on.

“You have to update it,” he said. “Maybe you thought an employee would be the successor, but now something has happened. You have to continue to assess on an annual basis.”

Rothschild believes entrepreneurs need to be honest with themselves when deciding on a perpetuation plan.

“As the principal, your ID is not just as John Doe, but as John Doe, owner of the ABC company. All of a sudden when you sell, you are back to John Doe,” he said. “You have to come to the realization: Do I have a need to be inside and continue to be associated as John Doe with the ABC Company?”

Rothschild also had to weigh what was important to him as a business owner and advises other entrepreneurs to do the same. While selling to an outsider might offer a bigger paycheck, the business might not be the same under a new owner.

“It was important to me to perpetuate my business for my employees and clients who helped bring me to where I am today,” he said. “When a business is sold to a third party, the team generally comes in and superimposes its own culture.”

Rothschild said, by perpetuating from within, this firm’s culture is maintained and sustained.

“I needed my two sons to buy into that fact,” he said. “Our culture here is we meet with the business owner face-to-face to discuss needs and solutions and that is an important ingredient that differentiates us.”

If keeping it within the family, entrepreneurs also need to be realistic about balancing the move of their business to the next generation while continuing with their own roles.

“It’s a slow process,” Applegate said. “I want to work part time as long as I can physically and mentally do it.”

Rothschild remains active in the business handling long-term accounts and bringing a sense of “gray-hair stability” to the office. He will continue to take cues from his sons moving forward.

“At this point, they like having me as a sounding board,” he said. “I am happy to continue in my role until such a point when they’re asking: Why not spend more time in Florida?