You are here: Home / Articles / A higher level of care 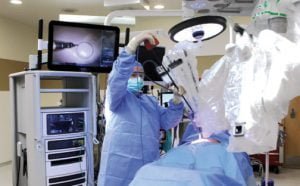 Kris Jansenvangalen, director of surgical services for La Porte and Starke hospitals, is setting up La Porte Hospital’s new robot and positioning it to be used for gallbladder surgery. (Photo by Richard Warner)

The term continuous improvement once only was talked about in manufacturing circles because those businesses always sought ways to shorten production and delivery times to boost profits.

Now that practice has been adopted by many industries, including health care where positive patient outcomes push innovations by physicians, surgeons and hospitals in the Region.

“Technology can help us deliver care more efficiently. It’s better for patients, and it’s a better way for them to get back to their families and lives,” said Dr. Jeremy Luedtke, who is certified in both general surgery and surgical critical care at La Porte Hospital.

“As specialists, we have to be able to deliver state-of-the art care and be able to designate the right path for patients in their diseases process. It’s really critical,” said Dr. Andrea DeLeo, neurologist and director of the Parkinson’s disease and movement disorder program at Community Hospital in Munster.

From more advanced robotic-assisted surgeries to treating Parkinson’s disease and essential tremors with electrical impulses, Region leaders in the health care industry have advanced techniques and instruments available in their toolboxes to best serve patients.

La Porte Hospital is receiving a new robot for surgeons and gynecologists to use for less-invasive procedures.

“It allows us to do a greater complexity of surgery with more precision and smaller incisions,” Luedtke said. “It allows us to treat harder cases, and patients are in the hospital less, have less pain and they can get back to work faster.”

“While the older version of the robot is fine, it’s sort of like having a car from the 1990s. At the time, it has safety features that weren’t available in the 1980s, and the car can get you from Point A to Point B, but today’s technology allows us to do more,” he said. “The new version has better options. The robot we have now has a fixed point while operating. The new one allows me to move it around without having to remove the robot from the patient and re-apply it.”

Luedtke has performed more than 500 robot-assisted surgeries and serves as a proctor, traveling to help train surgeons on best practices.

“Utilizing this technology allows for smaller incisions, causing less trauma to tissue and less pain,” he said. “Statistics indicate this decreases hospital length of stay, and I would give a decreased narcotic amount than I would give when doing a surgery laparoscopically or open. In this day and age with narcotic overuse, we need to be aware of that benefit too.”

While some big or emergency cases still require open surgery, Luedtke said he strives to do as many surgeries with robot assistance as he can as he continues to see the benefits for his patients.

“For example, I performed a colon surgery on a patient that was able to be discharged in three days,” he said. “The patient was talking about how the experience, care and comfort were significantly better than the patient’s significant other who had the procedure without robotic assistance. This technology allows patients to get treated for the diseases or problems that they have and back to what they want to be doing, back with their families and back to their lives.” 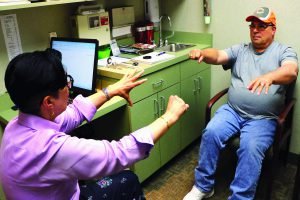 “We have tremendously improved almost every patient’s quality of life,” DeLeo said. “It really is revolutionary.”

Target populations for the procedure include those with Parkinson’s disease, essential tremor disorder and dystonia, a movement disorder that includes involuntary movements of twisting or torsion. Patients who have a certain quality of life, no cognitive dysfunctions and who are age-appropriate are good candidates for DBS.

It begins with imaging to determine the precise location needed for implantation. Next, electrodes are surgically implanted into these affected parts of the brain and a neurostimulator is implanted into the patient’s chest. The implanted thin insulated wires contain electrodes that are later programmed to help reduce a patient’s tremors and improve motor skills.

“It really is like a pacemaker for the brain,” DeLeo said. “We’re able to drop doses of medication by about a third and therefore, minimize side effects.”

The hospital’s updated device allows for more precise targeting and steering of electrical impulses, which is on par with Chicago hospitals, says Mary Fetsch, director of marketing and community relations at Community Hospital.

DeLeo said the Infinity device steers the beams or electrical impulses, so that it has a circular 3D signal targeting, which can be used to steer right, left, up or down.

“We can really fine tune that patient’s benefits from the procedure,” she said. “We have the capability here to implant and program, which is very unique in this community setting.”

The treatment and care advancements can prove life changing for some patients, Fetsch said.

“You would not believe the difference in patients’ lives—to be able to walk into a room and not tell that they have Parkinson’s,” Fetsch said.

Franciscan Health and Northwestern Memorial Hospital are uniting to bring another level of neurological services to patients in Northwest Indiana.

Through this collaboration, Dr. Kevin Jackson, a neurosurgeon at Northwestern Medicine in Chicago, will also offer his services at Franciscan Health Crown Point. He focuses on minimally invasive spinal surgery and aggressive spinal tumor resection and complex spinal reconstructions with instrumentation.

“We have the ability to deliver university-level care to a community no matter how far the community is away from the university setting,” Jackson said. “It’s regionalized care for patients. Patients receive the full complement of services, and it’s delivered to a region that didn’t have access to it in the past.”

This program uses videoconferencing to bring together stroke patients in Northwest Indiana with vascular neurologists at Northwestern Memorial. The physicians examine the patient, interpret brain scan results and make recommendations for treatment directly while consulting with emergency department personnel at the Franciscan Health hospitals.

Jackson says this quick collaboration is vital because the faster stroke patients can be treated, the better the outcomes. Taking time to make several phone calls or initially transporting patients to another facility either with air or ground transportation can slow treatment.

“It may be an hour before someone recognizes something is going on, so there is already lost time before the patient seeks medical care,” Jackson said. “If you live in a somewhat rural community or no matter where you live, if you start developing symptoms, time is of the essence. When you go to an ER that’s conveniently located, there may not be the specialty care needed at that hospital.”

That’s why this partnership is so important to patients in the Region, he said. “We are able to remotely access patients and make determinations and initiate care much sooner,” Jackson said. “We can see the patients, see the images, review data points that have been acquired in the ER and make a determination. “Stroke patients are given medications to treat the clot that is causing symptoms, and that needs to be initiated fairly shortly after the symptoms start.”

Pinpoint focus for the brain 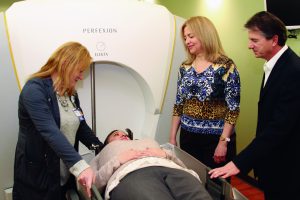 While it has been around for about 50 years, Gamma Knife radiosurgery continues to be upgraded to better treat brain tumors—both cancerous and noncancerous—and other malformations within the brain.

The team at Methodist Hospitals Southlake campus in Merrillville has just begun putting this latest version into practice. It has been offering the technique since 2003.

“This new machine gives us more accessibility and 30 percent more coverage of the brain and part of the neck,” said Laurel Valentino, Methodist’s director of neuroscience. “Methodist continuously tries to bring the best technology locally to people who can’t travel or have the support to do that.

“We want them to have access to this type of innovative therapies.”

It is used to treat brain tumors, acoustic neuromas (benign tumors), pituitary tumors (abnormal growths in this gland) and facial pain relief from problems with the trigeminal nerve, which carries sensation from the face to the brain.

“It’s bloodless, virtually painless; patients don’t lose their hair from the radiation; there are relatively few side effects; and many patients go back to work and daily activities within two to three days maximum,” Valentino said.

She says this outcome is considered the gold standard because it has been proven over and over again.

“When you are treating a brain tumor, you think about all of that other tissue … every single brain cell is very important. The idea is to be very precise so that surrounding tissue is not hurt,” Valentino said.

Valentino said it’s possible to treat single or multiple tumors all in one sitting. “The head frame is put on after the planning is done, and patients can be in and out in about 20 to 30 minutes,” Valentino said. “They come in and go home. This can be instead of brain surgery.”

Valentino has seen how important innovations are to health care standards in her 34 years at Methodist—many of those years in the neuroscience arena.

“When you have new knowledge, you can put that into better practices,” she said. “When you think of neurosurgery changes … while you have to open the head for some things, if you can prevent that, you save brain tissue and reduce complications, and patients go home in the best shape they possibly can with as much functionality as possible.”