Justin Kiel, 23, in his office in La Crosse, serves as publisher of two local weekly
newspapers. (Photo by Philip Potempa)

Twenty-three-old Justin Kiel describes his “entrepreneurial spirit” as “a calling” beginning in the sixth grade.

“I started tutoring to earn some money and then, by age 15, I was picking blueberries at a local farm, but I wasn’t working for the owners,” said Kiel, who lives in La Crosse, population 552, in La Porte County. “I picked the berries for myself and then resold them at a higher price to make my own profit.”

By age 17, he successfully convinced his mother they should buy two local newspapers to save the publications from closing. And less than a year later, his reputation as a young leader with promise earned him an appointment on the La Crosse Town Council.

“At first, I could tell the other members weren’t too sure about what this young guy was doing serving as a town official,” he said. “By a year later, I had earned their trust, and I was elected president of the council, a position I’ve held for four years now.”

Kiel, with his boundless energy and positive goals and dreams of better communities and a brighter future for every generation, only smiles when compared with most typical teenagers or his peers who are attending college and enjoying youth.

“I enjoy everything I do, and as far as what’s ‘typical,’ I don’t think it’s possible to define any person or group of people as typical,” said Kiel, who enjoys traveling in his limited spare time. He ventured to Barcelona, Spain, and Vienna, Austria, in August.

A 2015 graduate of La Crosse High School in a class of 25 seniors, he admits he sacrifices some sleep when “on deadline,” but he says his time investment balances his many fulfilled goals and achievements.

“Buying the newspapers is what really changed my life,” said Kiel, who spent a year of college studying at Purdue University’s North Central Campus before deciding to “take a break and make the real world a classroom experience.”

“In an age when most people my age aren’t holding a newspaper in their hand to read about what’s happening all around them, I know when my newspapers come off the press each week,” he said. “It’s my favorite part of my week to hold in my hand the latest edition and know there are plenty of people waiting to read it.”

In existence for more than a century, the owner of the publishing company for both The Regional News (founded in 1915), covering La Crosse and Wanatah, and the Westville Indicator (founded in 1882), planned to retire. He advertised both newspapers for sale and indicated that, if a buyer was not secured, both newspapers would close.

“My mom was very hesitant about us buying the publishing company, but the asking price to purchase the newspapers was much lower than you might think,” he said.

Both newspapers are broadsheet, span 10 pages and publish on Thursdays. Kiel is responsible for designing the newspapers, managing all finances, and overseeing circulation and distribution. His mom, Kelly, who also serves as the clerk-treasurer for the town of La Crosse, assists her son with editing and coordinating content production.

When not on newspaper deadline, Kiel’s balancing act, including his role of town council president, is paying off for the community.

“When I first started on the council, I wanted our town to start applying for grants, but the members kept saying there wasn’t any point because we wouldn’t get any money,” he said.

“After applying, I’ve gotten us more than $250,000 in state and federal grants, which we’ve used to resurface every street town.”

At age 22, he began serving on the Northwestern Indiana Regional Planning Commission and now serves as treasurer and executive board member of the organization.

Kathy Luther, chief of staff for the NIRPC, said Kiel is always too willing to serve in roles that other members don’t want to tackle, such as chairing the organization’s outreach committee.

“Justin always asks great questions, and it’s so important for us to have young enthusiasm from someone who is so interested in everything we do,” Luther said.

“He always steps up to help us with any need we have,” she said. “He is an example of new leadership in Northwest Indiana.”

Philip Potempa is a 1992 graduate of Valparaiso University. He covered entertainment in Indiana, Michigan and Illinois for The South Bend Tribune in 1992 before joining The Times of Northwest Indiana and Illinois in 1995 where he worked in features for more than two decades. In 2016, he joined The Post-Tribune and Chicago Tribune Media Group. He is the author of three published books chronicling stories, interviews, recipes and memories from his personal and professional experiences. He also is an adjunct instructor in communication at both Valparaiso University and Purdue University Northwest. 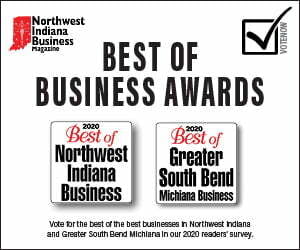