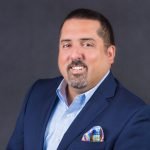 An executive with museum experience will be the new leader for the National Mascot Hall of Fame in Whiting.

Orestes Hernandez, formerly vice president of business development at the Coral Gables (Florida) Museum near Miami, was named executive director of the interactive children’s museum and hall of fame for collegiate and professional sports mascots set to open Dec. 26.

Hernandez said he's honored to lead the hall of fame.

“I look forward to having the thousands of K-8 students and families in the surrounding communities and across the country visit to experience hands-on S.T.E.A.M. learning with our inaugural interactive exhibits, while also highlighting the important role professional and collegiate mascots play in our society,” he said.

Hernandez spent 15 years in professional sports with the Miami Marlins and the PGA Tour at the WGC – Cadillac Championship in Doral, Fla. He will oversee the hall of fame’s strategic planning, operations, marketing, sponsorship sales, donor development and general fundraising.

The hall of fame also hired four full-time staff members to assist with the day-to-day operations.

Karen Anaszewicz was named museum office manager. Anaszewicz worked in banking for 12 years before taking over as executive director of the Whiting-Robertsdale Chamber of Commerce where she helped plan year-round events including Pierogi Fest and Wickedly Whiting.

Adam Moskalick and Alexa Cano, make up the hall of fame’s events team. Both Moskalick and Cano are experienced creative and event coordinating professionals.