You are here: Home / Archives for Community

The Small Business Development Center‘s two-hour Business Feasibility Workshop helps would-be entrepreneurs examine their ability to launch a business by considering the opportunities and challenges involved in business ownership. When: Tuesday May 18 from 6 to 8 p.m. Where: Hammond INnovation Center, 5209 Hohman Avenue in Hammond Registration: Cost is $25. Pre-registration and pre-payment are […]

More than just a professional networking group, e Engaging NWI Business Women’s mission is to attract, retain and advance business women in the Region through education, leadership and business development.  They are a catalyst for positive change in while adding value to careers and organizations. “There is a strong need for an organization like this in […]

John Davies is the Managing Director for the Society of Innovators of Northwest Indiana and as part of their mission to support entrepreneurship and leadership across the region Northwest Indiana Business Quarterly invited him to offer a recap of the organization’s April event. The Society of Innovators was launched by Ivy Tech NW and principal […] 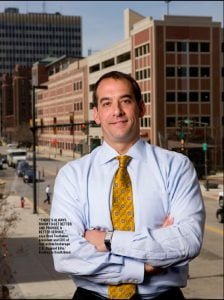 Brad Toothaker has a competitive  streak in him. It dates back to his days as a champion swimmer for the South Bend Riley High School Wildcats in the late 1980s, and later the UCLA Bruins in college. Toothaker, though, doesn’t make a big deal out of being a part of a state championship swim team […]

Moran Design Corporation added another award to it’s ever growing list of recognitions, recently capturing a silver in the prestigious 2010 Summit Creative Award competition, sponsored annually by Summit International Awards. Thousands of submissions poured in from 24 countries with the Hammond, Indiana design firm scoring among the very best creative entries. The design firm’s […]

Heartland Film Festival officially opened its Call for Entries and is now accepting independently-produced feature length, short and student films for its 19th annual competition, which will take place October 14-23, 2010 in Indianapolis, Indiana. Heartland Film Festival presents Crystal Heart Awards and more than $100,000 in cash prizes to the top-judged submissions, including a […]

The director of global litigation for one of the world’s largest engineering and construction companies and a former United States Attorney for northern Indiana, John F. Hoehner, will speak to graduates of the Valparaiso University School of Law during May 22 commencement ceremonies. Hoehner, whose distinguished legal career has spanned more than 30 years, will […]

NWIBQ.COM supports RSS syndication, for all of you savvy web news readers out there. To subscribe, click on the RSS link anywhere you see it. Or, click the RSS icon in your browser’s address bar. If you are an avid news reader, and don’t know what RSS syndication means – you’re missing out on a […]