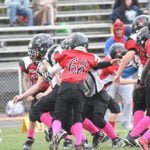 Northwest Indiana Youth Football and Cheer has 75-80 kids involved this year in four age groups, ranging in age from 7 up to 14.

The game is not going to lose him. David Bush is pretty clear about that.

“I love the game of football,” he says.

And so, autumn is a busy time for him, and has been for more than a quarter century. He runs a family business. He lends his guitar-playing skills and his rich, deep rumble of a voice to a country band. And he coaches youth football.

He began with the Crown Point Junior Bulldogs program 26 years ago, and he got into it the way a lot of people do: because his boys wanted to play football. He coached them, and then he coached other fathers’ sons, and after a while it became something generational, and of course something personal.

“I looked at these kids I’d coached when they were younger, and I couldn’t walk away,” he says.

And so here he is all these years later, coaching the sons of the sons he coached years ago. He’s the president of Northwest Indiana Youth Football and Cheer, an organization that operates out of Valparaiso and plays its games at Andrean High School.

Northwest Indiana Youth Football and Cheer was formed in 2014. It reorganized this year, merging with the United Youth Football League. This year 75-80 kids are involved in four age groups, ranging in age from 7 up to 14.

As with all youth football these days, the organization is dealing with the fallout of what Bush calls the “C-word” – the link between concussions and traumatic brain injury first discovered some 15 years ago, and only recently acknowledged by the National Football League.

At the youth league level, that’s led to declining participation. A New York Times story in January reported that participation in tackle football by boys between 6 and 12 has fallen nearly 20 percent by 2009, although there was a modest 1.2 percent bump in 2015. At least some of the latter can be attributed to rule changes, some quite radical, designed to minimize or eliminate head injuries.

According to the Times piece, U.S.A. Football, the national governing body for amateur football, is introducing rule changes that will allow teams to field only six to nine players instead of 11, eliminate punts and kickoffs and require that players begin each play in a crouching position instead of a three-point stance.

All Bush knows is that it’s a vastly different game he’s teaching now than it used to be. On the Northwest Indiana Youth Football and Cheer website, there’s a link to HEADS UP Concussion in Youth Sports, a Centers for Disease Control Injury Center initiative that provides online concussion training, information on concussion protocols, action plans for coaches, parents, athletes and officials and even information about helmet fit and care.

“Yeah, it really has [changed],” Bush says. “Some of these little divisions, they’ve gotten rid of kickoffs altogether on the little might mites, the 8-and-unders.”

It’s all a long Hail Mary from the way it used to be, back when Bush was starting out coaching his own two boys. And he’s OK with that.

“You know, a lot of guys are like ‘Oh, my God, they want to put skirts on them.’ They talk about all this all the time and why don’t we just play flag football,” he says. “But you know what? From a kid’s standpoint, if those kind of rules enhance and help safety for the kids …

“You know, we’re all about the kids. We’re coaching kids here. The rule changes and all that, I think it helps. But I think the biggest thing is just being conscientious about teaching the coaches and getting them information to educate them on HEADS UP and stuff like that. I’m loving that stuff.”