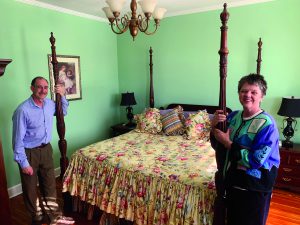 James Berman and wife Lizbeth Bryant named each of the five guest rooms at their Valparaiso Inn after their own grandchildren: The Stella, The Gianna, The Julia, The Madeline and, pictured here, The Kara. (Photo by Philip Potempa)

A stroll in Valparaiso’s historic Washington Street District in 2012 led couple James Berman and Lizbeth Bryant down a path they never expected. The Mother’s Day walk was the inspiration for eventually buying a 130-year-old three-story mansion.

The eight-bedroom landmark residence built at the turn of the century was once owned by the president of Valparaiso University. It was for sale and in much need of renovation. They dreamed of turning it into a bed and breakfast like the ones they often liked to stay.

“When someone asks us about what experience we had prior to beginning this establishment, our answer is ‘we ourselves have stayed in more than 30 similar lodging ventures during our own travels and definitely, we know what we like, and especially, we know what we didn’t like about those experiences,’” Berman said.

But not without a lot of work. They invested more than $400,000, an amount even more than what they paid for the house at 301 N. Washington St., a couple blocks away from the Porter County Courthouse.

Berman did much of the renovation and remodeling except for the plumbing and the heating and cooling upgrades. There was plenty to keep him busy.

While the house has the capacity for eight large guest bedrooms, each with its own attached full bathroom, city rules allow for only five rooms to be used for paying guests.

“We are a licensed lodging business as recognized by the city officials, and therefore, we adhere to all of the codes, health inspection considerations and enforced zoning,” Berman said.

Bryant said she assisted her husband with the interior decorating and furnishings, which span antiques and heirlooms to some more contemporary selections to ensure the comfort of their guests. Berman does much of the cooking, with his gourmet breakfasts a highlight. Bryant helps with the cleaning and laundry, and assists with the business paperwork.

Berman, who also works as a licensed therapist, and Bryant, who is an English and writing professor at Purdue University Northwest, are originally from Virginia and will celebrate their 30th wedding anniversary in August. Now they are innkeepers too.

Together, they have shared in the adventurous duties of researching the history of the home, as well as the tedious tasks, such as stripping away four layers of wallpaper. 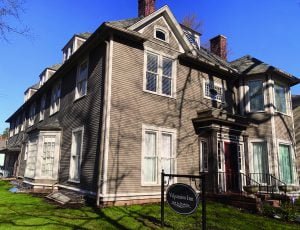 Built about 1900, the three-level, 8,000-square-feet mansion at 301 N. Washington St., which once served as the home of the president of Valparaiso University, is open to guests and branded as the Valparaiso Inn. (Photo by Philip Potempa)

The house was constructed about 1900 by Dr. Horace Evans and his wife, Anna Maude Skinner Evans, while Horace was teaching at Valparaiso University before he was named its president.

“We have discovered so much history surrounding this house, especially during the years 1923 to 1926 when it was the residence of the president of Valparaiso University,” Bryant said. “Now, we are adding our own family history to this home. Each of the guest rooms are named after our grandchildren.”

The names, according to their website at valpoinn.com, are Stella, Kara, Julia, Madeline and Gianna.

The cost to stay per night ranges between $160 and $200 based on double occupancy and depending on the season and the day of the week. Guests can enjoy the other rooms in the house, such as a sitting room, formal living room, elegant dining room and a solarium. Meals, including breakfast, are served from fine China with full formal place settings, which include crystal stemware.

“My goal is that we eventually are running at least 50 percent capacity at all times rather than to have lags between guest stays,” Berman said. “Our next phase of further improvements will have us working in the yard and with the landscape. Ultimately, we’d like to have more events booked as well as weddings, parties and receptions.”