You are here: Home / Articles / Things to See and Do in Northwest Indiana

A night of Russian music 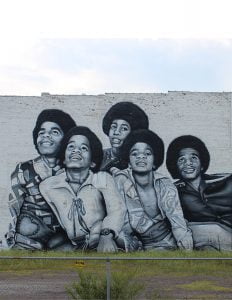 The Jackson Five mural by Felix Maldonado at 5th Avenue and Broadway in Gary was created in the summer of 2016 for the city of Gary. (Photo by Ish Muhammad)

Superstar cellist Richard Hirschl from the Chicago Symphony Orchestra performs three pieces with the Northwest Indiana Symphony on Oct. 26, on the stage of the Auditorium at Living Hope Church, Merrillville. The cello takes the place of the human voice in Rachmaninoff’s haunting  “Vocalise”  and Tchaikovsky’s lyrical  “Lensky’s Aria” from “Eugene Onegin.” The composer’s “Rococo Variations” pay tribute to his hero, Mozart.  Also in the concert, “Scheherazade,” based on  “The Arabian Nights,” uses dazzling, colorful orchestration with a mix of Eastern flare to tell the musical stories of an exotic princess who spins her tales to stay alive. This holiday season, the symphony offers two opportunities to enjoy the perennial favorite, its sell-out Holiday Pops concert—first on Dec. 13 at Monbeck Auditorium in Highland, then on Dec. 14 at the new Valparaiso High School auditorium. The symphony chorus joins the orchestra along with musical guests. Call (219) 836-0525 or visit www.nisorchestra.org.

South Shore Arts presents a two-part series of exhibits that showcase artists whose work is sparking new life in old places. The exhibits will be presented at the Center for Visual and Performing Arts in Munster during a six-month period beginning this fall and in multiple venues in Gary next spring. Older cities often suffer from abandonment, and public art projects are seen as a good strategy for regeneration. Artists young and old in urban settings are creating artistic opportunities in areas where art can make a significant contribution to urban reuse and renewal. These exhibits will explore, document and promote the work being done as it transforms what has been into what can be. “Indy Windy: A Love Story,” running Nov. 13 through Jan. 29, will feature artists from Indiana and Chicago who execute large public artworks to create new environments in aging urban and manufacturing areas, while also documenting their experiences and creating new work in their private studios. The exhibit will be curated by Ish Muhammad, a self-taught artist from Indiana. The exhibit will present an overview of creative activity underway by a community of Midwest artists, some of whom have been working together for almost 30 years. A Friendsgiving Party and Artist Reception will be from 6 to 9 p.m. Nov. 16. The second half of the series, “Urban Legends: Haunts,” is Feb. 8 through April 21. Curated by John Cain, this exhibit will feature the work of guerilla photographers who have been lured to Gary and other cities to capture the haunting beauty of architectural ruins on the verge of being repurposed as gardens and other public spaces.

Yes, Virginia, there is a Santa Claus

Two compelling stories cometogether in this heartwarming play inspired by the famous editorial that appeared in an 1897 edition of The New York Sun. After a series of unhappy events, 8-year-old Virginia spends Christmas Eve pondering whether or not Santa really exists. Meanwhile, a young newspaper editor, faced with losing his job if he can’t find his writer’s voice by morning, also struggles against tough times. Although they don’t know each other, the spirit of Christmas is about to bring these two people together, creating, in the process, an unforgettable and cherished part of classic Christmas folklore. See this charming production at the LaPorte Little Theatre Club, Dec. 7 through Dec. 16. Call (219) 362-5113 or visit www.laportelittletheatreclub.com.