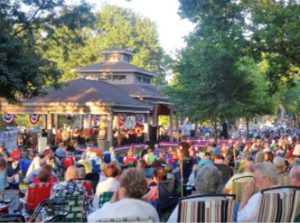 An update on arts and entertainment options across the region

The 2017 South Shore Summer Music Festival will feature free concerts by the Northwest Indiana Symphony in Lake and Porter counties during July and August. Everyone is welcome to come early; bring lawn chairs and blankets, relax and enjoy the music. Concerts kick off in Cedar Lake on July 22, and continue in Crown Point on July 29, Valparaiso on August 2, Indiana Dunes National Lakeshore on August 4, Griffith on August 5, Hammond’s Wolf Lake on August 11 and Schererville on August 12. 219/836-0525 or www.nisorchestra.org.

Footlight Players in Michigan City presents Beth Henley’s Pulitzer Prize-winning play, “Crimes of the Heart,” August 11-20. The scene is Hazlehurst, Mississippi, where the three Magrath sisters have gathered to await news of the family patriarch, their grandfather, who is living out his last hours in the local hospital. Lenny, the oldest sister, is unmarried at thirty and facing diminishing marital prospects; Meg, the middle sister, who quickly outgrew Hazlehurst, is back after a failed singing career; Babe, the youngest, has shot her abusive husband. 219/874-4035 or www.footlightplayers.org.

Every summer, Friendship Botanic Gardens hosts a special evening of world-class artistry from the Lyric Opera of Chicago. Enjoy this event among the scenic vistas of the gardens on August 13 for a preview of the Lyric Opera’s 2017-18 season, featuring some of the biggest names in the Chicago arts and culture scene. All proceeds contribute to the continued restoration and maintenance of Friendship Botanic Gardens, a historic 105-acre botanical park in Michigan City that serves as the region’s premiere destination where nature meets culture. 219/878-9885 or www.friendshipgardens.org

Who will be the next Hoosier STAR? Don’t miss 10 dynamic singers, all under one roof, for an incredible evening of vocal gymnastics, accompanied by the La Porte County Symphony Orchestra led by energetic maestro Philip Bauman. Musical styles of rock, pop, country, swing and classical provide an amazing night of vocal intrigue. Audience members vote for the winners. Don’t miss the encore performance of the previous year’s winners and the insightful comments of celebrity judges. La Porte Civic Auditorium, Saturday, Sept. 9 at 7p.m. 219/362-9020 or www.lcso.net

The winner of seven Tony Awards, including Best Musical, Best Book and Best Score, “Big River” is a musical retelling of Mark Twain’s treasured “Huckleberry Finn,” featuring songs and music by Roger Miller. Set to melodies of country, bluegrass and gospel, this humorous and harrowing river journey follows Huck and Jim as they meet up with con artists, reunite with Tom Sawyer and encounter a collection of characters as imagined by one of America’s greatest writers. Theatre at the Center, Sept. 19 through Oct.15. 219/836-3255 or www.theatreatthecenter.com