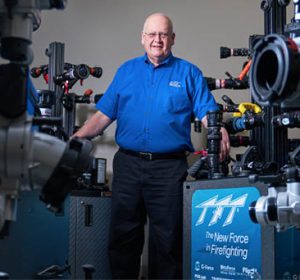 For Stewart McMillan, CEO of Task Force Tips, the Valparaiso-based, worldwide distributor of firefighting equipment, innovation is a profitable passion that inspires, saves lives, and provides an all-American way to do business and serve the community. McMillan jokes about testing 100 percent positive for Obsessive Compulsive Disorder on a recent Facebook quiz, but says of his perfectionist, attention-to-detail nature, “It’s really about being innovative and being able to see things differently.” It’s also about continually being on the lookout for ways to increase efficiency and quality. After a recent factory visit he observed an assembly worker dabbing oil onto a piece before inserting it into assembly and suggested that the worker instead drop the oil into the bin of parts. Once implemented, this new assembly operation method improved output and made the job easier. “It’s those little things that I get a kick out of,” he says. “That’s why I think our company has excelled, and that’s where we’ll continue to excel in making the job safer and more efficient.”

That drive to continually improve efficiency, safety, and quality is a legacy McMillan inherited from his father, Chief Clyde McMillan. Task Force Tips began with a daydream in 1968, when Chief McMillan drafted his idea of an automatic nozzle on a paper napkin with a red felt pen. Growing up, McMillan spent weekends with his father and the Gary Fire Task Force maintaining and improving old firefighting equipment, and continued to work full-time in the family business while earning his interdisciplinary degree in engineering from Purdue University. When his father passed away in 1982, McMillan, at the age of 28, became president of Task Force Tips.

Today, Task Force Tips makes and supplies firefighting equipment from firehose nozzles to hydraulic rescue tools, employs some 230 people, and sells products worldwide, with 30 percent of its sales from exports overseas. On January 12, the company was sold to Madison Industries, a Chicago-based private investment firm, the culmination of what McMillan describes as a 12-year search for the perfect partner. The partnership is a winning arrangement for all involved, he says, as Madison Industries wants to build legacy businesses and they want the founders to stay in place. As part of the deal, Madison Industries insisted that they wouldn’t buy Task Force Tips unless they could buy the real estate. McMillan says, “They wanted to make a statement to the employees that they’re not going anywhere, and that they very much believe in American manufacturing.” He says that’s a prime example that, despite what you may hear and see in the news and on the street, “American manufacturing is not dead.”

The sale to Madison Industries has provided a safety net for Task Force Tips to grow in ways not possible before the sale. “The only thing I’ve received is encouragement to spend money I wouldn’t have spent before because of the risk, which they’ve taken away,” he says. “It’s quite refreshing.” The partnership will allow access to acquisitions of other companies in the fire and rescue service market which, McMillan says, “When we are able to put our productivity increases into their operations, I think we’ll be able to make some companies more successful.”

It’s not all about growth through acquisitions, though; the partnership also provides a foundation for establishing a lasting legacy for the community. The liquidity from the sale provided funding for the McMillan Family Foundation, which will provide seed capital for organizations that otherwise wouldn’t exist. An investment of two million dollars has been made in the MAAC Foundation, which was used to establish a regional volunteer firefighting academy located just down the street from Task Force Tips headquarters. The MAAC Foundation, which stands for Multi Agency Academic Cooperative but is pronounced “Mac” like McMillan’s father’s name (the foundation was dedicated in his honor), provides training for volunteer firefighters so they can meet state requirements. McMillan says that one of his reasons for selling his company was to use the money that he’s been fortunate enough to gain for the benefit of the community. “I’m not going to take it with me, and I’d like to see some things happen while I’m still around to enjoy making them happen.”

Amanda Wilson
Amanda Wilson believes that everyone’s story has worth, and enjoys the privilege of highlighting a variety of Region residents and happenings for publications including Northwest Indiana Business Quarterly Magazine, The Times, and Valparaiso Magazine. A married, minivan-driving, introverted mom of three, she does her best to covertly defy the boring mom stereotype by blogging at Musings and Meanderings of an Undercover Misfit, letting her kids eat pizza in front of the TV on Friday nights, and riding first car on roller coasters.