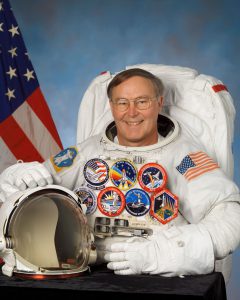 A retired Air Force colonel, Jerry Ross is a veteran of seven shuttle missions. His last flight into space was aboard the Atlantis between April 8 and 19, 2002. (Photo provided by NASA)

Few people can say they’ve orbited the planet in a space shuttle.

Crown Point native Jerry Ross is among that elite group of individuals. A retired Air Force colonel, Ross is a veteran of seven shuttle missions. His last flight into space was aboard the Atlantis between April 8 and 19, 2002.

For Ross and other astronauts who have had the opportunity to fly in space, they recognize getting there is no easy task. Ross persevered and received his first mission aboard the space shuttle Atlantis, which launched Nov. 26, 1985, and returned Dec. 3, 1985.

Ross said being born and raised in Indiana as well as the influences of growing up around a strong family structure shaped his work ethic, which defined his professional life.

“My grandparents and parents were all very hard-working people,” Ross said. “My mother and dad, they were determined to make sure their children got a good education, but they also were supportive to us to stretch our wings and encouraged us to pursue what we wanted to do.”

In Ross’ case, he wanted to work in the space program but not necessarily as an astronaut. Growing up, he collected news articles about the early days of the nation’s space exploration efforts. That’s how he got hooked.

“By the time I got to the fourth grade, I knew I wanted to go to Purdue (University), and I wanted to become an engineer and get involved in the space program … there were no astronauts (at that time) because no one was using that word then.”

Ross never forgot his Midwest upbringing, which impressed on him that working hard brings rewards. From his travels around the world, Ross said the reputation of the Midwest work ethic is well known.

“It’s a unique quality not only of people from Indiana but from people of the Midwest,” he said. “People I’ve met talk about it a lot.”

Ross logged a total of 58 days in space during seven missions.

“Though you train for a long time to go into space, it’s still an extraordinary experience when you actually do it,” he said. 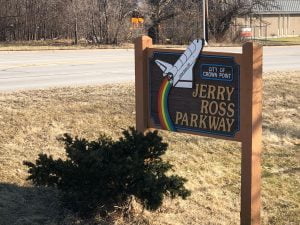 Janet Ross Rattazzi, Jerry’s sister who lives in Crown Point, said she and her family are proud of her brother’s accomplishments. Rattazzi said her brother is just as proud of her and their other sister, Judi Futa, who lives in the South Bend area, of their choice to become teachers.

“(Jerry) is still that very down-to-earth person from Crown Point, Ind.,” Rattazzi said. “It’s still surreal to us that he launched into space seven times and (did) many space walks.”

She recalled the nerve-wracking experience of her brother’s first shuttle mission. When the engines fired, the ground shook even though spectators were a safe distance away from the launch site. “My sister and I would say to each other, ‘why would he want to do this?’” Rattazzi said.

Jerry Ross hasn’t forgotten his roots. In 1999, he returned home for the grand opening press conference of the Challenger Learning Center in Hammond, which draws thousands of students annually to learn about the discoveries and scientific importance of space exploration.

Hammond’s center is one of 43 in the country.

Ann Vassar, a flight director and crew leader at the Hammond center since 2008, said the Hammond center’s founder, Lisa Austgen, a teacher, was a colleague of Rattazzi’s at Lake Street School in Crown Point. Vassar said Ross has visited and spoke at the center through the years. She said the Region is fortunate to have an astronaut who calls Northwest Indiana home.

“In our lobby, there’s a painted picture of Jerry Ross, and we point out to kids that he’s from the Region, and we tell them, if they keep working on their dreams like Jerry did, good things will follow,” she said.