You are here: Home / Articles / Something for everyone 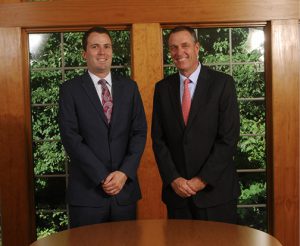 Blake Applegate, left, believes the tax changes signed into law in December are business friendly but complicated, while his father, Paul Applegate, says the changes will result in increased complexity for small businesses. Both CPAs are with Applegate & Co. in Michigan City. (Photo by Richard Warner)

On Dec. 22, 2017, President Donald Trump signed the Tax Cuts and Jobs Act into law. Passed by the House of Representatives on Dec. 19 and then the Senate three days later, the bill makes widespread changes to the Internal Revenue Code.

Since then, the nation has had time to mull over how the changes might impact small and large businesses as well the implications to individuals and pass-through entities. Region professionals also have been pondering what to expect and how best to prepare.

C-corporations and the big boys

Taxed separately from their owners under subchapter C of the Internal Revenue Code, C-corps benefit from the new tax laws in several ways.

“A major change to corporate income tax is the replacement of the old graduated system that had tax brackets increasing from 15 percent to 35 percent with a new flat 21 percent tax rate,” explained Mike Varner, CPA and partner at Kruggel Lawton CPAs, with offices in South Bend Elkhart and St. Joseph. “This applies primarily to the largest businesses, including all those that are publicly traded, but there are also many small businesses operating under this entity structure.”

The new flat rate has been on the wish list of major corporations for several years. The higher tax rate in the U.S. frequently was criticized and blamed for headquarters—and money—being moved out of the country. Business owners who take a salary, as opposed to dividends, will no longer see their salary taxed at the corporate rate. Taxes can be lower for shareholders and owners who receive dividends, and those who take said salary will no longer be double-taxed.

Varner said the new corporate tax structure is the only item in the new law that is permanent.

The new C-corp tax model allows shareholders to shift income readily and retain earnings within the company for future growth, usually at a lower cost than for other models like S-corp and pass-through. C-corps enjoy more flexibility in determining their fiscal year. Shareholders can shift income more easily, deciding what year to pay taxes on bonuses and when to take losses, which can substantially reduce tax bills.

Another major benefit of the Tax Cuts and Jobs Act is business depreciation deductions.

Blake Applegate, CPA and treasurer of Applegate and Co., said this change is encouraging owners to invest in new equipment for their businesses.

“Being able to take the full deduction is sparking investment in factory lines, trucks, all sorts of equipment,” he said. “The intent was to spur business investments that can lead to job growth.”

Section 179, which allows another type of business property expensing similar to bonus depreciation, was raised to $1 million for 2018 from $510,000 in 2017. Paul and Blake Applegate see a benefit in this type of expensing along the same line as bonus depreciation.

All the business depreciation deductions are in play for pass-through entities and S-corps as well as C-Corps.

While all the above is good news for corporations and the economy in general, some changes were restrictive. Paul Applegate points out that business expenses for entertainment, such as client tickets for concerts and sporting events, are completely non-deductible.

Section 199A creates a deduction based on the calculation of business income instead of actual economic outlays required for most other business deductions. The provision is a significant tax benefit for many noncorporate businesses and was passed in part on the premise that a sizable tax rate cut for C-corps justified a corollary tax benefit to qualified business income.

“Section 199A is the really big news in the tax reform,” said Keith Wolak, CPA and partner at Hoeppner Wagner and Evans LLP in Valparaiso. “The benefit to all business types other than C-corps. is significant, because small business is the backbone of our economic engine. The 20 percent reduction and the depreciation abilities can spur investments and job addition in the right circumstances.”

There is a caveat.

“These businesses have been given a substantial tax break in the form of this new deduction of up to 20 percent of business income,” says Matthew Stosich, the tax manager at McMahon and Associates in Munster. “Most small businesses should be able to utilize this new deduction in full. However, owners of service businesses such as doctors, lawyers and accountants will see this deduction phase out once their taxable income exceeds a certain amount.”

“Other nonservice business owners face additional requirements in order to qualify for the deduction once their income exceeds these thresholds,” Blake Applegate added, “but most should likely still qualify for the full 20 percent deduction.”

The intent was to provide nonservice businesses with a significant incentive to expand and invest because of the tax deductions and equipment depreciation policies.

“Small manufacturing in particular had a tough go of it,” Paul Applegate said. “These policies are intended to help them help themselves.”

Because so many pass-through entities eventually tie into the owners’ 1040 form, changes that impact individual and joint taxpayers play a significant role in the bottom line. 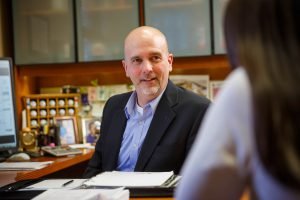 Mike Varner, CPA and partner with Kruggel Lawton CPAs with offices in South Bend, Elkhart and St. Joseph, discusses new tax changes with a client. Varner said. “A major change to corporate income tax is the replacement of the old graduated system that had tax brackets increasing from 15 percent to 35 percent with a new flat 21 percent tax rate.” (Submitted photo)

“The new tax laws will also result in lower taxes for most individual taxpayers,” said Stosich with McMahon and Associates. “A change that affects every taxpayer is a lowering of all of the tax rates and expanding some of the lower tax brackets. Additionally, many taxpayers will benefit from an increase in the standard deduction.”

As the standard deduction was increased from $12,000 to $24,000, the deduction for personal exemptions was eliminated.

“Most of the taxpayers affected by this change are large families with several children,” said Wolak of Hoeppner Wagner and Evans. “However, this same group will benefit the greatest from a doubling and expansion of the Child Tax Credit.” The credit was increased from $1,000 to $2,000 per qualifying child, and a new $500 credit was created for other dependents.

“Personal Exemption of $4,000 per person are gone completely,” Wolak said. “This may impact adults more, since children still qualify for the Child Tax Credit.”

“Taxpayers in high-tax states like New York, New Jersey and California will be most affected,” Varner says. “Even in a lower-tax state like Indiana, high-income individuals often exceed this amount.”

Another category of deductions that was eliminated include investment advisory fees and unreimbursed employee expenses. On the flip side, workers who deducted a significant amount of work-related expenses will see the previous 2 percent floor disappear.

“What we are seeing is that most taxpayers will have a lower tax liability in 2018 due to these changes,” Stosich said. “Even in the case of taxpayers that are going to lose a big chunk of their deductions for 2018, most, but not all, will still end up paying less tax due to the lower tax brackets and other changes.”

Getting out in front

Region tax experts agree the IRS and Treasury Department have yet to firm up hazy areas of the new law through regulations. They say minor changes will occur when the new tax code is finalized by regulations, which must be in place before the next tax preparation season begins.

The significant changes of the new tax law, and the tweaking of regulations, would seem to require everyone to regularly review their tax situation until rules are more solidified.

Many taxpayers, especially business owners, are required to make quarterly estimated tax payments, so they might need to adjust the amounts due to the impact of the regulations as well as the tax law itself.

Region tax experts offered these suggestions to prepare for the new tax rules: