Economics and demographics are aligning to propel the industry.

The recreational vehicle (RV) industry is robust and poised for a bright future, according to several industry stakeholders in Elkhart County and beyond.

RV dealer sales are one way to track the RV market. Pam Argostino is the general manager/president of Camp-Land RV, a large family-owned RV dealership serving the Northwest Indiana-Chicago area for 50 years. Her dealership has experienced an uptick in sales with the improved economy.

Argostino's experience is not unique. It represents the industry's state of affairs as a whole. RV sales had plunged 65 percent by 2009. With gas prices hovering at about $4 a gallon, many consumers abandoned dreams of RV ownership or simply left theirs in the driveway instead of paying steep fuel prices. Fast-forward seven years and the trend has been reversed. The average price per gallon is around $2, the economy is on stronger ground and consumer spending is strong.

Argostino says the dealership is poised for more growth this year. “We are budgeting for another 15 percent increase in number of sales over last year,” she says. “So far this year, we are very close to hitting those numbers and expect that we will.”

Why is Argostino so optimistic? A lifestyle driven by more economic certainty is a factor. “I think people are more optimistic about the economy,” she says. “Maybe not in the obvious way you would think–I think it's just not at the forefront of their minds anymore and they're returning to living their lives and not operating out of fear or ‘survival' mode anymore.”

Argostino says “… getting outdoors, seeing things you can only see in a state park, sitting by the campfire, hiking, truly seeing America, I think, makes us value a simpler time–no phones, no computers, etc.

“I think [camping] makes families closer through their shared experiences and sometimes the mishaps you have while camping or with your camper are the funniest memories you have later. You also have the flexibility to move around to different areas without all the hassle of standing in lines at airports.”

That mindset has implications for the industry as a whole–across the supply chain at large. Argostino says her dealership employs about 35 people and they are always in search of qualified talent. “Because of the upswing in purchases, that also translates to higher volume in service work and repairs. We are always looking to train and hire service technicians. We'd hire five more technicians today if we could find the right individuals. We cannot keep up with demand for service work in the summer months and we're always trying to hire and correct this problem.”

It's a mixed bag for manufacturers, too, as Argostino explained. They are producing more RVs than ever, which need to be transported and delivered locally and across the country. To that end, she says the RV industry is always looking for transportation drivers.

And more RVs can translate into a boon to local tourism. “The more RVs that are out there, the more the parks are full,” she says. “It brings a lot of tourism to this part of the state.” She adds that the multimillion-dollar sports complex being built in Portage will also have a lake and a large campground.

Mark Dobson, CEO of the Elkhart County Economic Development Corp., has similar comments. He notes that although significant, the footprint of the RV industry is difficult to quantify because it's so far-reaching.

“The overall impact of the resurgence of the RV industry is hard to measure, but vitally important to the region,” he says. “This region is known for building things. Elkhart County is the RV capital of the world. Eighty percent of the units produced in the U.S. are produced by Elkhart County manufacturers.”

This work extends beyond skilled labor. There is a need for the best and brightest in white collar jobs, too. In Dobson's words, “Not only are the units built here, this is where research and development takes place. The innovations seen in the industry are developed here.”

Dobson says that, although there are many factors at play, innovation has been key in the industry's resurgence.

The companies impacted by the 2008 downturn took “extraordinary steps to reinvent themselves,” he says. For example, they implemented traditional best practices to improve bottom lines. They relied on their entrepreneurial spirit to press forward, despite hurdles.

Dobson points out that any company is only as good as its people and Elkhart County has traditionally been blessed with a vibrant workforce. Another variable is the consolidation of supply chain companies.

“The supply chain is stronger and more diversified in Elkhart County than prior to the recession,” Dobson says. “The aging baby boomer population is helping. More and more baby boomers are retiring and are looking to have an RV as part of their lifestyle. And companies are making units more affordable than ever.” 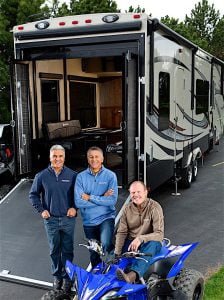 “PEOPLE WITH KNOW-HOW” Bill Fenech, Ron Fenech and Don Clark founded Middlebury-based Grand Design RV in 2011, citing a high level of confidence in the industry, the local economy and the skills of the local workforce.

In other words, it really is a perfect storm. “When Elkhart County is booming [like now], the region is benefitting by the high levels of employment and company investment,” Dobson says.

Statistics from the Indiana Department of Workforce Development show Elkhart County has one of the lowest unemployment rates in the state at 4.2 percent. With a better economy than in recent years and a high demand for product, local RV manufacturers are relishing the business climate.

Elkhart-based Thor Industries Inc. signaled confidence in the continued growth of the RV industry in July when it acquired Jayco, based in Middlebury. Jayco operates the subsidiaries Starcraft RV, Highland Ridge and Entegra Coach. The merger makes Thor Industries the world's largest RV manufacturer. Together, the two companies employ 7,500 workers in Elkhart County.

Thor Industries will continue to operate Jayco as an independent company under its current leadership team. Derald Bontrager is president and CEO of Jayco, a company founded by his father, Lloyd, in 1968. Lloyd Bontrager developed the basic design that is patented and still in use.

Derald Bontrager says, “As a company and as a family-owned group, we've been through some good and bad times. Great people and products are what have kept us afloat.”

He's optimistic about the future of the industry because of a healthier economy, more access to credit and a changing demographic. According to Bontrager, the average age of an RV buyer has gone down, which means younger families represent a newer yet viable market. He projects the next decade or two will be “very strong” for the industry.

Like Dobson, Bontrager says innovation will be what propels the RV industry forward. Manufacturers have become “more aggressive” with product development. For example, he says products are lighter and can be more easily towed by smaller vehicles.

Don Clark, co-owner of Grand Design RV in Middlebury, has seen his share of changing sales cycles as a 30-year industry veteran. A former Keystone RV Co. executive, he founded the company in 2011 with brothers Bill and Ron Fenech. According to Clark, it was a matter of timing. “We had a tremendous level of confidence in the industry, the local economy and people with know-how.”

Clark's far-sightedness came into play as well. “Every time our industry takes a dip, it comes back at a new high,” he says. Today the industry is reporting record sales highs and Grand Design is no exception. This year, executives are confident they can surpass the 67 percent jump in retail sales from 2014 to 2015.

With such growth often comes a need for additional space. The company has outgrown its existing four-building manufacturing complex, which collectively has about 500,000-square-feet of space. In May, Indiana Gov. Mike Pence and Lt. Gov. Eric Holcomb were on hand for a groundbreaking ceremony for an $11 million expansion project that includes construction of two 110,000-square-foot buildings on a 48-acre parcel purchased last year. The new building is likely to be finished by August.

The company employs about 800 employees and plans to hire around 100 once the expansion is complete. More space means more production to keep pace with increasing demand for the company's four brands of upscale rigs: the Solitude, Momentum, Reflection and Imagine.

“In Elkhart County, we have an amazing workforce to draw from, and we've been fortunate to tap into the best of the best,” Ron Fenech said in a statement. “It sounds like platitude, but it's really not. Our workers are phenomenal.”