You are here: Home / Articles / Rounding up donations

Jeff Strack, left center, presents a donation check to the Food Bank of Northwest Indiana from the proceeds raised from the grocer company’s “Round Up” program. (Photo provided by Strack & Van Til) 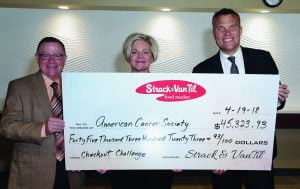 Jeff Strack, right, presents a donation check to Wendy Mang of the American Cancer Society from the proceeds raised from the grocer company’s “Round Up” program donations. Dave Wilkinson of Strack & Van Til is on the left. (Photo provided by Strack & Van Til)

Jeff Strack, center, presents a donation check to Habitat for Humanity, from the proceeds raised from the grocer company’s “Round Up” program donations. (Photo provided by Strack & Van Til)

“The company's leaders and employees care about people, plain and simple. Words aren't enough to express our gratefulness for the generosity of Strack & Van Til,” Feldman said.