You are here: Home / Articles / Reclaiming the land

Region a hub of expertise in redeveloping brownfield sites 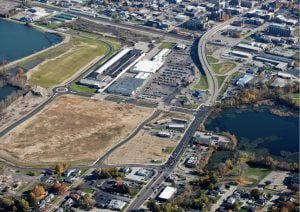 NewPorte Landing in La Porte is among the largest and most-recognized brownfield site redevelopment projects in the Region. NewPorte Landing will include residential, commercial and recreational space. (Submitted photo)

Ask any Region resident or community leader, and they’ll tell you Northwest Indiana is an attractive area for companies looking to do business.

With a history as a manufacturing hub, however, reclaiming and redeveloping old industrial sites can prove challenging.

Brownfield sites, according to the Environmental Protection Agency, refers to “real property, the expansion, redevelopment or reuse of which may be complicated by the presence or potential presence of a hazardous substance, pollutant or contaminant.”

While the potential for lengthy and expensive cleanup may deter some developers, those who recognize the opportunities will find a wealth of resources in the Region to revive an old site and bring new concepts into reality.

“Funding is always an issue,” said Kay Nelson, director of environmental affairs with the Northwest Indiana Forum in Portage. “There’s not always a party that has resources to remedy historical contamination, but if a buyer or investor hasn’t had experience with brownfield grants, they don’t realize that funding options are available.”

In April, the forum hosted its first-ever panel discussion on brownfield redevelopment and education, where panelists discussed funding sources and insurance programs for redeveloping old sites.

“It’s important for an interested party to know what’s available and expanding knowledge has been critical in boosting that utilization,” Nelson said.

EnviroForensics, which recently opened a Hammond office, assists sellers and buyers in securing funding to clean up environmental contamination.

“We are experts in understanding the environmental issues—contaminant type, extent of the contamination, potential exposure risks to people, the cost to clean up the contamination and at obtaining a site closure from the regulatory agency,” said Stephen Henshaw, CEO of EnviroForensics. “But the most important value that EnviroForensics offers customers, both sellers and buyers of contaminated property, is in finding the funding source to pay for the cleanups.”

Henshaw said the company has had success finding and using old insurance policies to cover cleanup and legal expenses on brownfield sites, a practice that has served him well since launching the business in 1996.

“The biggest takeaway I can give a business owner or property owner is to look for, find and secure any and all old insurance policies that were written for businesses and properties,” Henshaw said. “These policies can be worth millions of dollars. We recommend searching your records, talking to brokers and if necessary hiring an insurance archeology specialist to locate old insurance policies.”

He said old insurance policies, normal slip and fall policies, do not have pollution exclusion in them, but they can be used to pay for environmental investigations, cleanups and as protection against future third-party liabilities.

“We have used the insurance policies of deceased individuals, bankrupt entities and defunct companies,” Henshaw said.

EnviroForensics also will seek tax credit incentives, which can help a developer turn a brownfield liability into a lucrative investment.

According to Henshaw, the Indiana Economic Development Corp. and the Indiana Finance Authority have several brownfield development incentive programs.

“One program, that is excellent when addressing the demolition or refurbishing of older buildings greater than 100,000 square feet is called the Industrial Recovery Tax Credit and better known as the DINO tax credit,” Henshaw said. “It provides an incentive for companies to invest in former industrial facilities requiring significant rehabilitation or remodeling expenses.”

He said another program, through the Indiana Finance Authority, focuses on low-interest loans for cleaning up contamination.

The Northwestern Indiana Regional Planning Commission (NIRPC) is part of the NWI Brownfield Coalition, which secured two federal grants from the EPA, including a $600,000 grant for assessment funding. The grant can be used to reclaim brownfield sites.

If contamination is suspected at a site, a second phase of testing on soil and water samples will determine the extent of contamination if it exists. The federal assessment grant has been used to assess 27 properties in Gary, Hammond and East Chicago, according to the NIRPC.

Another grant, available through the Regional Development Authority, provided $800,000 either through a revolving loan or no- or low-interest loan for cleanup projects within Gary, Hammond or East Chicago.

Should contamination be discovered on a desirable site, cleaning up the property would be the next step.

“Sometimes a bank doesn’t want to finance (site) cleanup,” Luther said. “That’s where (the RDA) grant comes in, making loan money available for the cleanup portion on eligible sites of the project that may be hard to acquire otherwise. As the municipality or investor pays the money back, it becomes available for a new project.”

Luther said any development deal is tricky to get everything in place and government funding to go toward reclaiming unused industrial or commercial sites can help close a transaction.

“Historically in our Region, we should get funds and clean up the site and then look for an investor, but there will never be enough money to clean it all up,” Luther said. “A better way and the better thing is to have a developer and then use brownfield funding as one piece of the overall project’s financing package.”

Finding investors for brownfield properties can be difficult because of potential environmental issues. Some property owners are reluctant to label available parcels that way out of fear of losing potential buyers.

“It is a challenge for communities,” said Nelson with the Northwest Indiana Forum. “However, if identified as a brownfield, it could create a whole new level of interest.”

Lack of marketing as well as insufficient funding, uncertainty of contamination condition, and either limited or no local use plans are among the hurdles Nelson said contributes to limited interest in developing the Region’s brownfield sites.

“Oftentimes developers are not aware of a site being available or in a position to be adjacent to other property to do land assembly,” she said.

Henshaw with EnviroForensics said the ability to present sites as brownfields, which might be eligible for government funding to assist with site cleanup may be a game changer.

Experts say developers are out there seeking former industrial sites and recognize the property might have problems. But if those properties are not being marketed, they might be overlooked.

“With industrial property, it’s hard to find a site that is not contaminated,” Henshaw said. “We are in a very hot market, and we are seeing a lot of people that are jumping from Chicago and looking at the Northwest Indiana market and opportunities in Northwest Indiana.”

Experts say the Region has locations that can be designated as government-defined brownfield sites, including industrial factories dating back to the late 19th century before environmental preservation was a consideration in doing business.

“But large parcels are hard to find, and more and more developers are looking to assemble several (smaller) parcels together, and some of these parcels are more likely than not going to have contamination on them,” Henshaw said.

He said heavy metals, including lead, arsenic and chromium and cleaning solvents, are the main contaminants found requiring cleanup.

Businesses, including dry cleaners, metal finishers, auto body shops and service repair shops, account for a large number of properties, which could require remediation before development can occur.

Henshaw recalled a site in the city of Hammond that operated as a dry cleaner for decades where groundwater contamination was present.

“The property was owned by an individual that passed away before the property could get into the remediation stage,” he said. “The groundwater contamination from the former cleaner was migrating under several homes and apartments, and in an effort to abate the problem and mitigate threats to local residences, EnviroForensics worked with a developer that specializes in purchasing contaminated properties.”

Henshaw said the developer purchased all the downgradient properties and was able to control the cleanup on the neighboring properties, protect tenants from potential exposure and give neighboring property owners a fair market value purchase of their property, where there previously was none.

“The cleanup is underway, and the development is in the works to convert the former cleaner into a commercial office,” he said.

EnviroForensics is also working on a project in Crown Point where a bank owned the mortgage on a building used by a dry cleaner that went bankrupt. EnviroForensics worked with the bank and now can obtain regulatory closure of the property and facilitate the property transaction with a developer.

In Gary, a demolition project became eligible for a cleanup loan through the NWI Brownfield Coalition’s revolving loan grant program because it needed asbestos removed.

Luther with NIRPC said the city of Gary received a grant to demolish the Ambassador Apartments in Gary, but not enough money to do it all.

“It was over $200,000 just to get the asbestos out, so money was borrowed and now they have a property ready and available for redevelopment,” she said.

Once all hurdles associated with identification, testing and cleanup have been overcome, once-blighted areas have a myriad of possibilities for redevelopment.

Nelson with the Northwest Indiana Forum said NewPorte Landing in La Porte is among the largest and most-recognized brownfield site redevelopment projects in the Region.

“It was a heavy industrial site with groundwater, soil and demolition issues,” she said. “It has been a long process using state and federal grants and local funding, as well to move it forward. It is a large site that is under redevelopment and in environmental remediation.”

NewPorte Landing will include residential, commercial and recreational space.

Throughout the state, EnviroForensics has been involved in dozens of projects that are turning former industrial sites into usable land for new uses.

In Fort Wayne, a large structure in an industrial complex with PCBs present, will soon be demolished and available for future development, the company said.

A former plastic manufacturer off I-65 in Lebanon will become a new warehouse and office space while a former chrome-plating facility that had caught fire in a Mishawaka industrial complex will be revitalized.

In Madison, EnviroForensics worked with a developer to clean up an old tack-and-screw company site that will be used for senior housing and was the cornerstone for the city to be awarded the Indiana Stellar Grant.

Beth Spurgeon, division manager of corporate responsibility at ArcelorMittal Americas, said her company is, “committed to ensuring that the land where our facilities are no longer in operation is successfully remediated and/or redeveloped.”

Spurgeon said that, in Lackawanna, N.Y., a portion of the land assets ArcelorMittal inherited from Bethlehem Steel out of its bankruptcy is being leased for wind and solar farming.

Spurgeon said that, since 2012, ArcelorMittal USA has worked with the nonprofit organization Wildlife Habitat Council to restore and conserve land it owns.

“This includes the restoration of over 40 acres of on-site dune and swale habitat and an employee walking trail at our Burns Harbor, Ind., facility,” she said.

For questions and more information on brownfield sites, contact:

Follow Me
Carrie Steinweg
Carrie Steinweg is a freelance writer, author, blogger and photographer living in Chicago’s south suburbs with her husband and five sons. Her work has appeared in more than two dozen print and online publications.

An author of six books, Carrie has penned three are historical titles, two children’s books (“Into the Night” and “Old 104 Ridges Again”) and “Mom Moments,” a compilation of her parenting columns from the Northwest Indiana Times.

Carrie is a foodie who thoroughly enjoys traveling and visiting new restaurants and craft breweries, attending food festivals and trying out new recipes and kitchen gadgets. She writes about her food experiences at ChicagoFoodieSisters.com, a popular blog launched in 2011.

Follow Me
Latest posts by Carrie Steinweg (see all)