You are here: Home / Articles / Navigating the Waterways 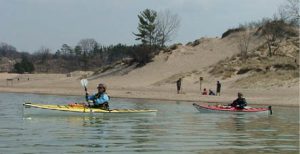 NWIPA members paddling canoes and kayaks along the waterways of Northwest Indiana.

She’s the first to admit that the ancestral spirit of the French voyageur likely doesn’t breathe within her. Nor does that of the Olympic kayaker.

Instead, Debby Stoit says she’s still a novice at this business of paddling canoes and kayaks along the waterways of Northwest Indiana, and the glory of that is it doesn’t matter. What matters is the fellowship and camaraderie she’s found among her fellow paddlers in the Northwest Indiana Paddling Association.

“I’d paddled once in my life—once or twice, maybe—and I thought, ‘Wow, this is fun,’” says Stoit, 62, now a NWIPA board member. “I didn’t really know what I was doing, but I happened to read about an event (the NWIPA) had, and I thought, ‘Huh. This looks like fun, I think I’m gonna do it.’”

What she discovered was not only great recreation and a connectedness with nature, but a marvelous social circle.

“They were such a welcoming group of people,” Stoit recalls. “I didn’t know anything. And yet everybody was just extremely helpful and . . . I thought, ‘Wow, what a great group of people to be involved with.’ And the rest is history.”

It is, as these things go, a relatively brief history. The NWIPA was born in January 2009, when a paddling enthusiast named Dan Plath convinced some of his fellow enthusiasts to form a group. Plath had learned to paddle in the summers on family trips to Lake Manitou at Rochester, and his enthusiasm for it proved infectious.

“I met Dan in the fall of 2008,” says Ken Stelter, the NWIPA vice-president. “In talking to him, (Plath) said, ‘Yeah, it’s kind of time to find a club and start it in this area.’ He referred to it at the time as getting boots on the ground of people who wanted to get involved in cleaning up the lakes and streams.”

What grew out of that conversation is a nonprofit organization as committed to teaching and conservation as it is to the sheer fun of paddling. Its mission statement says the group is “dedicated to promoting the region’s paddling resources and opportunities, providing environmental stewardship of the region’s waterways, education, and providing a voice for the region’s paddlers.”

In keeping with that, among the group’s initiatives are canoeing and kayaking classes taught in several cases by instructors certified by the American Canoeing Association, of which the NWIPA is an associated member. The Blueways Stewardship Committee, meanwhile, organizes the group’s cleanup efforts.

As Stoit discovered, the NWIPA welcomes all levels of expertise, from kayakers to canoers to paddleboarders.

“We encourage the public to come out, novices and experts and everybody in between,” says Stelter, who canoed with his family as a kid but hadn’t been in a boat in 20 years before he met Plath. “We want to bring them to area waterways to show them what a great resource we have.

“And then these people who come to our events, they turn around and they become volunteers when we go out for our cleanup events.”

Although NWIPA members are mainly kayakers, that’s not by design nor is it always so, Stelter says. Plenty of canoers and paddleboarders show up at events, which range from the Sea Kayak Expedition and Ride the Wave Regatta on Lake Michigan in August to the Trail Creek Fun Float and Torch Relay and hugely popular Kankakee River Sandhill Cranes in October.

There are two types of membership: Full membership that carries a $15 individual annual fee or a $25 family fee, and an associate membership. Either way, members join a unique and tight-knit community.

“You know, I’m still learning,” Stoit says. “They keep encouraging me and coaching me to go a little further, so last year I finally went on Lake Michigan, which for me was quite an accomplishment.

“The great thing is, everybody’s very open here. (There’s a lot of) ‘You want to try this boat? Try my boat.’ And it’s just great.”