You are here: Home / Articles / Making the world take notice 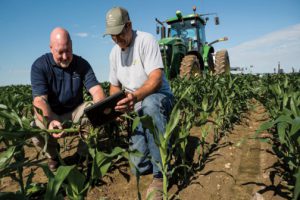 Agriculture is big business in the Hoosier state. When it comes to production of corn, soybeans, peppermint, spearmint, watermelon, tomatoes, cantaloupe and pumpkins, Indiana ranked in the top 10 nationally in 2017 for those crops.

On the livestock side, Indiana is in the top 10 in hogs, turkeys and eggs. All from a state not in the top 10 in number of farms or farm acreage. That’s productivity and efficiency to make any businessman proud.

Agriculture sales in 2017 reached $31.2 billion, with an additional $4.6 billion in exports, according to state estimates.

With a strong production track record, state and Region officials are examining ways to get more Indiana agricultural products to the world.

The Indiana State Department of Agriculture advocates for Indiana agriculture at all levels. The ISDA is responsible for managing soil conservation, promoting economic development and agricultural innovation and supporting agricultural youth development.

Indiana is home to 56,800 farms, making it the 11th-largest farming state in the nation, and is a leader in many agricultural products.

“Corn and soybeans are still major Indiana crops,” said Bruce Kettler, director of the ISDA. “But today, our farmers produce a wide variety of other crops and livestock.”

A great example is the hardwoods of Indiana forests, used to create home and office furniture.

“One way we advocate for farmers and agribusinesses is through economic development,” Kettler says. “Indiana agriculture employs over 107,000 workers directly and adds another 80,000 jobs indirectly.”

That ripple effect into connecting businesses makes agriculture second to manufacturing as a major player in the state’s economy.

The $4.6 billion in annual exports is above and beyond the $31 billion in U.S. sales, Kettler notes.

“Indiana’s exports continue to grow annually,” Kettler said. “We also experience growth in feed grains to many nations. That’s a result of our increases in productivity and efficiency.”

Trade agreements and tariffs have been widely discussed in recent months, creating uncertainty for farmers, but progress is being made, as can be seen by the recent U.S.-Mexico-Canada Agreement.

ISDA has several programs and initiatives aimed at growing the state’s agribusiness. One program is Indiana Grown, which promotes products grown, raised, produced or processed in the state. The program has more than 1,200 members and works to add value and create new markets for Indiana farmers, while generating consumer awareness about these products.

Rural broadband connectivity is a project close to Kettler’s heart.

“The ISDA is working with several other departments and businesses to bring affordable high-speed broadband internet to all areas of rural Indiana,” he said. “Technology is a keystone of economic development and education, and we need to provide every tool available to all of our constituents.”

The ISDA believes that putting the internet in the hands of farmers will improve their information base, which will in turn increase their knowledge of new concepts in agribusiness.

The Ports of Indiana 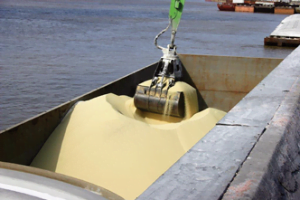 A discussion of exports, interstate and international, would be incomplete without the Ports of Indiana. With three ports on the Ohio River and Lake Michigan, the operating system moved 11.8 million tons of cargo, 3.7 million tons of that agricultural products in 2017. Aggregated agriculture products are the second largest cargo handled at the ports, according to Shelley Triol, the ports’ director of communications and strategic Initiatives.

“Ships come through the St. Lawrence Seaway directly to our Port of Indiana-Burns Harbor,” Triol said. “Outgoing agriculture cargoes are placed on ships which navigate the seaway to access global markets through the Atlantic Ocean.”

The inland river ports at Mount Vernon and Jeffersonville export cargo to the Gulf of Mexico where the products are transloaded to ocean vessels for transport all over the world.

While the Ports of Indiana are mainly transporting by boat, rail and truck also are involved.

“Grain and soy products are produced in Indiana, trucked to the grain elevators at the ports, then sold to both domestic and overseas markets,” Triol says. “We have a grain elevator at each port.”

Overseas demand results in export growth at the ports.

“The Mount Vernon port recorded its best volume year ever in 2017, and has already passed that total this year,” Triol said. “The export of agricultural products was one of the top drivers for our growth.”

The ports provide a ripple effect regarding jobs.

“It’s important to note that our ports are located in agricultural regions around the state,” Triol said. “We provide agriculture clusters that in turn provide tremendous synergies for ag-related businesses. For instance, there’s a grain elevator next to a soybean processing plant next to an ethanol plant at Mount Vernon.”

These synergies reduce the time between processing steps and/or distribution while it creates jobs.

“It also reduces costs for customers,” Triol said. “Synergies at our ports include multimodal connections and job-ready industrial sites that can help companies hit the ground running.”

The Ports of Indiana have land open for development that can provide the agriculture industry access to the water, railroad access and expansive direct highway infrastructure. All these positive features provide access to broader market opportunities and can be a beacon for business.

Ceres Solutions, with headquarters in Crawfordsville, is a co-op committed to best practices for the benefit of their farmer-members and for the air, water and soil. With 8,000 active members, it is one of the largest and most active co-ops’ in Indiana.

“We are a value-added co-op that utilizes technology and the science of agronomy to increase the efficiency and productivity of our farmer-members,” said Jeff Troike, president and CEO. “We provide assistance to Indiana farmers in several ways, such as soil and moisture analysis, satellite imagery, field potential, seed, fuel and feed.”

“We help farmers learn about the nuances of their field,” Troike said. “We test acreage through grids and zones that show the differences throughout the field.”

A large field might have significant differences regarding nutrition and moisture, according to Troike.

“It’s not efficient for a farmer to overfeed one area because another area is underfed,” he said. “The tools we use, the science behind them and the interpretations from our staff can show which areas are in a greater need than others. Fertilizer and water can be applied as needed to that particular grid. That results in more productivity at less cost.”

Over the years, the science of farming has grown by leaps and bounds.

“Decision farming is based on precision,” Troike said. “When farmers have the right information, they can significantly increase their output.”

If farmers have the right data, they can produce between 200 and 220 bushels of corn and between 70 and 75 bushels of soybeans per acre. That’s an increase of 30 percent in one generation.

“Because of advancements in agriculture, our food supply remains the safest, most affordable and most abundant in the world,” Troike said. 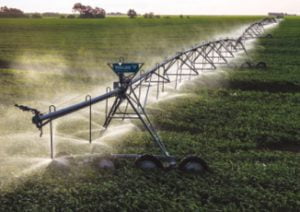 In addition to creating ripple-effect jobs through exportation, agriculture brings the bacon closer to home through support services.

“We have sold and installed around 2,000 center-pivot irrigation units,” says Aaron Shidler, division manager of Chester AG Systems. “Our irrigation started off with vegetable growers and eventually grew into irrigating a large variety of crops.”

Chester irrigates a large amount of corn and soybean acreage, but specialty crops request high demands of their products and services.

“Most residents of Indiana think we only grow corn here, but that’s far from the truth,” Shidler said. “Northwest Indiana has such a neat variety of seed corn, mint, popcorn, potatoes, tomatoes, green beans, pickles, onions and turf grass.”

Making it rain when the crops need it is what Chester irrigation systems are all about.

“Timing is everything when trying to grow these crops,” he said. “Mother Nature doesn’t always supply the needed moisture for successful crops.”

“Our Northwest Indiana farmers see an increase in bushels per acre with irrigation applying water when needed,” he says.

“The AG sector requires and demands a large amount of employment for the community,” Shidler said. “It’s a true trickle-down effect that involves many people and businesses.”

More than corn in Indiana

Indiana Grown, the initiative of the ISDA, helps Hoosier farmers get their brand, reputation and products out to consumers all over the state. Kendall and Tammy Culp, owners of Culp Family Farms in Rensselaer, have seen the benefits of the program. They also have their eyes on a bigger prize.

“In addition to grain crops, Tammy and I raise livestock,” Culp said. “We raise pork and beef on our 2,000 acres. We sell frozen cuts at the local farmers market on Tuesdays and Saturdays. On Tuesday evenings, we grill pork burgers for customers, and that’s gone over really well.”

“Fenwick gives us a promote on the menu, which we greatly appreciate,” Culp said.

Working with Indiana Grown has been a plus for the Culps.

“The ISDA has a great networking and promotional market,” Culp said. “We’re now working with them on a strategic marketing plan to expand our brand across the state.

“We hope Indiana Grown can help us get our meats into other restaurants and brewpubs that want to feature local farmers who raise quality products.”