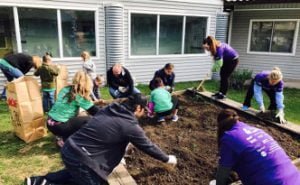 Lakefront Career Network organized 150 volunteers for a “Day of Giving” at the Stepping Stone Shelter to assist with landscaping, plumbing, kitchen upgrades and painting.

Network, develop professionally and engage with the community

Millennials are an optimistic generation. “They (millennials) want to have a great impact on their community and their world, work with a team, get things done,” according to John Zogby, founder of the Zogby Poll.

The Lakefront Career Network (LCN) is a dynamic group of young professionals who want to do exactly that. LCN was established in 2015 as a Michigan City Chamber program for young professionals to network, develop professionally and engage with the community in a meaningful way. It has more than 300 registered participants who host professional development and networking events in addition to volunteering monthly in the community.

The group wants to support an organization on a deeper, more purposeful level than just a one and done event. They narrow their focus each year on partnering with a single non-profit organization in the community.

“We knew that we could be effective working with one non-profit and be able to donate more time, services and money if we did so,” says Megan Applegate, chair of the LCN executive committee.

After research and interviews with several underserved organizations, LCN decided to work with Stepping Stone Shelter for Women during 2017. The shelter, located in Michigan City, serves victims of domestic violence by providing 24/7 crisis lines and intervention, temporary shelter, clothing, food, housing, counseling, support groups and advocacy. Kay Hill, executive director, says “Stepping Stone is not just for women and children but for men in need also. All services are free of charge and both residents and non-residents of the shelter are provided services.”

Meghan Johnson, marketing and communications manager, says, “Stepping Stone is the only women’s shelter in the county and, as a woman, you want to be able to empower and help the cause.”

Although the shelter has been actively serving Michigan City and La Porte County since 1983, there are still people that do not know about it. That has begun to change because of the partnership with LCN and other businesses this year. Kay Hill says they have seen an increase in volunteers and additional donations. “This year has meant so much to us and we could not be any more grateful to LCN for selecting us to work with,” she says.

The introduction of the partnership occurred in February at the monthly LCN networking event at the Lubeznik Center for the Arts. The next step was to host “Giveback Night,” an awareness event and kick-off fundraiser held in April at Patrick’s Grille in Michigan City. The event raised $2,000, and was followed by the “Day of Giving” at the Stepping Stone Shelter on April 22.

With the support of numerous business and individual sponsors donating not only financially but with product and services, the “Day of Giving” was an overwhelming success. More than 150 volunteers were on hand to assist with landscaping, plumbing, kitchen upgrades and painting. Comcast was one of the community partners that joined with LCN for the “Day of Giving” through its Comcast Cares Day volunteer project.

Since the Day of Giving, LCN has been able to raise an additional $5,000 to donate to Stepping Stone, plus a much-needed freezer for the pantry. LCN plans to host one last event in October to round out the year.

According to Applegate, “LCN set out to achieve its community goals this year and it’s hard to believe how far we’ve come. I can’t say it enough about how proud I am to be part of such a dedicated and involved group of young people.”

LCN will be taking applications from non-profits to partner with in 2018 beginning in October. Visit www.lakefrontcareernetwork.org for more details.