James A. Muhammad, president and CEO of Lakeshore Public Media (LPM), grew up in Tuscaloosa, Ala. He went to Stillman College on a choral music scholarship and traveled the country performing with the college choir, but majored in communications.

His parents were fans of public radio and television and Muhammad says, “They believed public media was the country's key institution for preserving culture and history at the national and local level. They were not only consumers of public media–they contributed financially through membership and also volunteered during pledge drives.”

By association, Muhammad was an early consumer and fan who dreamed of a career in broadcasting. 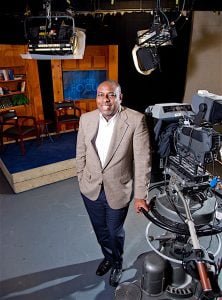 During his junior year at Stillman he had an internship at the Center for Public Broadcasting at the University of Alabama and that was the start of a decades-long career in public media. He later moved to Peoria, Ill., where he served as program director for the public station at Bradley University. His reputation began to spread within the industry, and he was recruited for director of radio services by West Virginia Public Broadcasting (WVPB).

Muhammad worked at WVPB for 13 years and says, “I had the privilege of learning from some extraordinary individuals like Trey Kay, producer of a documentary called, “The Great Textbook War.” It addressed the violent protests that broke out when civil rights activists and teachers pushed to include books like “The Autobiography of Malcolm X” and “Soul on Ice” in school curriculums.” The documentary won a Peabody Award and during Muhammad's tenure WVPB programs won other prestigious awards like the Albert I. du Pont Silver Baton, Gabriel Award, and the Edward R. Murrow Award.

Muhammad's star was rising and he was on the radar of public media stations across the country. In 2013 he joined LPM as president and CEO. The mission of LPM is to provide listeners and viewers with the latest local news, sports, weather, and information on local cultural and community events. When he arrived, the station had significant debt, so one of his first priorities was to reduce that debt.

Muhammad says, “Public media stations rely on membership and underwriting dollars. I knew we needed to think outside the box and come up with non-traditional fundraising methods. The station was already renting out its production trucks, and we have been able to increase revenue by doing more sports production for other television stations and renting our production trucks for television and movie appearances.”

Muhammad is in the process of developing a strategic plan involving staff, board members and key stakeholders. He says, “I see this as a team effort needed to set our course for the next five to 10 years. We will move more towards connecting Northwest Indiana to greater Chicagoland in an effort to spark opportunities and collaborations.”

In addition, he is looking at a shared resources program. “Technology is changing constantly, and the cost of maintaining or adding equipment can be staggering. The Joint Master Control program is like a production co-op that would allow up to 19 stations to share expenses, leading to a reduction in spending for all participants.”

Under Muhammad's leadership the station's debt has been reduced and LPM has increased its television and radio programming, significantly broadening local news coverage on 89.1 FM. The station launched “Counterpoint,” with Garrard McClendon, which helps to connect residents of Northwest Indiana with Chicago. LPM also re-launched “Regionally Speaking,” a daily one-hour program that presents stimulating conversations with local thought leaders. These and other programs have been well received.

Muhammad says, “I owe all of this to the amazing and dedicated staff here at Lakeshore. We have been able to re-launch some projects, create others, and restructure existing projects to keep them relevant and vibrant.”