You are here: Home / Articles / How to fix rural digital divide 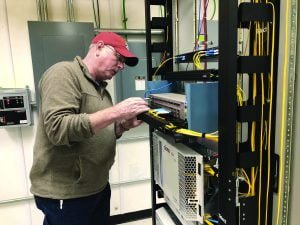 Bruce Speck, an outside plant project engineer with Intelligent Fiber Network of Indianapolis, inspects a recent installation of broadband equipment at a service building on the grounds of the Lake County government complex in Crown Point. (Photo by Larry Avila)

In rural America, it’s often a case of “the haves” and “have nots” when it comes to high-speed internet service—and Indiana is no exception.

Rural areas have been largely left out when it comes to building or improving fiber networks. Federal, state and private businesses are working diligently to ensure Hoosiers in every corner of the state—urban or rural—have access to broadband connectivity. Private industry and federal, state and local government agencies have been working together to close the digital divide, and those efforts are making a difference.

While internet use and dependence are not confined to geographic location, rural communities still lag behind urban areas in terms of access to and adoption of broadband connections. And, rural areas get left behind when it comes to connection speed.

According to the Center for Rural Development, about half of rural residents across the U.S. have access to the level of internet service that the FCC states is the benchmark for high-quality residential broadband service in the U.S. A February 2018 government report shows the FCC maintains a speed benchmark of 25 Mbps download/3 Mbps upload (25 Mbps/3 Mbps) for fixed services.

That same report showed about “98.1 percent of the country has access to either fixed terrestrial service at 25 Mbps/3 Mbps or mobile LTE at 10 Mbps/3 Mbps, with that number dropping to 89.7 percent in rural areas.” 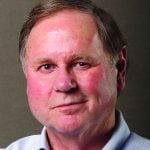 Wally Tyner, a James and Lois Ackerman Professor of Agricultural Economics at Purdue University, weighed in on this disparity. He co-authored a report (“Estimation of the Net Benefits of Indiana Statewide Adoption of Rural Broadband”) with two other colleagues, which was released in August 2018. His findings underline the importance of high-speed internet in rural counties.

“Just think about how you use internet every day in your life,” he said. “It’s not always available to people in rural areas, so that means they can’t do things urban dwellers take for granted, like make online purchases, shop for health care, do homework, etc.”

For farmers, that can mean the difference between getting price information or not, he added.

Tyner posits there’s more to this divide than just a nuisance or inconvenience.

“The internet is an essential; it's not a luxury,” he said. “And if you don't have it, you get left behind.”

Unfortunately, the reason for the gap is rooted in economics as it relates to population density, or lack thereof.

“The density of houses in rural areas is not high enough to make it pay,” Tyner said. “(Providers) just can't afford to run broadband (between) 20 and 30 miles to reach the next house.”

It's just not economically viable, he said.

“So, the big commercial companies aren't going to do it,” Tyner said. “If it happens, it’ll be the rural cooperatives who are doing it.”

That’s where Tyner’s research is vital. The study analyzed potential costs and benefits associated with broadband installation within the service territory of seven electric cooperatives and extrapolated those findings to the entire state.

Tyner explained the importance of another finding cited in the report.

“For every dollar invested in broadband, (it) results in a four-to-one ratio of investment,” he said. “So that means if you invest $1, you get $4 in benefits to the economy.”

Health care, retail, education and other sectors enjoy the benefits. It doesn’t have to be a case of big businesses alone profiting. In his words, high-speed broadband “levels the playing field” for rural small-business owners too.

“My sister-in-law had a rural business and was lucky enough to have access to high-speed internet,” he said. “She was able to grow it from a small enterprise out of her garage to a full-scale business.”

Tyner said it didn't matter where she was located because she could do business from anywhere in the world because she was on the web.

In other words, infrastructure can make or break rural residents’ ability to improve their quality of life and economic situation at the same time. 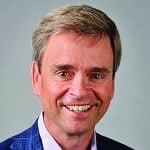 James Turner, president and CEO of Intelligent Fiber Network, is acutely aware of this reality. Last year, IFN announced a plan to invest up to $100 million during the next five years in Indiana, as well as a multi-year, multi-million-dollar network upgrade across the state.

“The upgrades and investments increase capacity, improve stability, and add operational and network efficiency—all of which are geared toward enhancing customers’ service experience,” according to a statement from the company.

Turner said the company’s past is just as important as its future plans.

“We started in 2002 as 20 small independent phone companies in Indiana who got together to create a high-speed network that would make them less dependent on the companies that are sometimes referred to as ‘the bigs,’—AT&T, Frontier, etc.,” he said. “And from that initial mission, we’ve just continued to grow.”

Turner said the need for high-speed communications and fiber connectivity has “exploded” in recent years and demand is only expected to increase. He said one reason is that the company’s enterprise customers, which include large health care providers and schools, are resource dependent.

“The business world really can't thrive or even exist without access to high-speed connectivity,” he said. “That concept has evolved over time.”

“And so, having that access through IFN fiber positions all of our customers in a more competitive way,” he said.

IFN’s business model is innovative because it looks to join forces with local partners already on the ground. These joint ventures help it continue to expand and deepen its high-speed fiber network. The company then can access new customers and extend fiber to new areas. Meanwhile, it also makes investments in network upgrades to ensure reliability, stability and scalability for the future.

According to Turner, this move was strategic, and he hopes other rural co-ops follow suit.

“These rural electric membership corporations are uniquely positioned to help solve the digital divide issue,” he said. “Because they have assets in the area, they already have infrastructure built out to rural locations, whether it's residential or commercial. And so, partnering with the co-ops could provide us both with a unique opportunity to help close the digital divide.”

Getting to the next level

Another stakeholder on the front line of closing the gap is at the state level.

The Indiana Office of Community and Rural Affairs (OCRA), focuses its efforts in rural areas. In 2005, OCRA was established as a separate state agency by the state legislature.

“The population is on decline in rural areas and is projected to continue to be on the decline,” she said. “So, it's really the mission of our agency to try to help reverse that trend and to provide programs and opportunities for communities to really build that quality of life, to try to help retain and attract the workforce and residents to rural Indiana.”

The broadband issue ties into that, Golden said.

Enter the Next Level Connections Broadband Grant Program. Gov. Eric Holcomb announced the program last fall, which calls for $100 million for the deployment of broadband in rural Indiana.

The initial phase will focus on unserved areas, which are defined by the state as “a census block that does not have at the time of application at least one broadband provider offering actual speeds of at least 10 Mbps download and 1 Mbps upload, or an area where there is not a potential provider for which the census block has been designated through a federal funding program to deploy that minimum level of service by a specified date.”

The goal of the second phase will be to improve service in those areas. Applicants will be the actual service providers or service entities deploying that infrastructure.

The application period closed May 3, and Golden said her agency is eager to see the grant money yield a return on investment.

What might that look like? In her words, “the availability of broadband access would be one metric, but there’s also an education piece to this too, as far as ensuring that residents understand the importance of broadband and how it would impact their community.”

Putting Valparaiso on the map 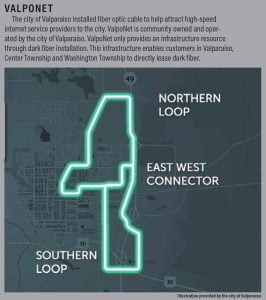 The city of Valparaiso recognizes that investing in a secure, vendor-neutral fiber optic network, which operates at high capacity, is an effective tool in attracting broadband service providers.

Stu Summers, executive director of Valparaiso’s Redevelopment Commission, said this investment was made in the name of helping the area compete in the global marketplace. It also is an effective lure to attract more broadband service providers to give residents and businesses competitively priced options for high-speed internet access.

ValpoNet gave access to Northwestern Indiana Telephone Co. (NITCO) of Hebron so it could provide service to East Porter County School Corp. It saved the company from having to install a little more than 2 miles of fiber optic cable to bring service to the school district.

Tom Long, president of NITCO, said that, before ValpoNet, his company only had limited access to potential customers in Valparaiso. The infrastructure investment by the city allows his company, along with other service providers, to offer high-speed internet access throughout Valparaiso.

“Valparaiso was wise to build up a municipal fiber network,” Long said. “What their network allows is it invites other providers to come in, which can keep prices down.”

To understand the competitive landscape, Summers offered an anecdote related to the development of cities throughout American history. One common denominator was that they had access to ports.

Then came the rise of interstate highways, which explains, for example, Dallas’ success. It doesn't have a port but has great interstate transportation access.

He said the larger vision behind doing all this is to continue to make Valparaiso an attractive place to live, work and grow.

Long said Valparaiso isn’t the only Region community that has invested in a dark-fiber network. He said Chesterton, East Chicago and Munster also have recognized the value.

Summers said ValpoNet is in the implementation phase, which mean it is signing up customers.

He looks forward to bringing other customers on board for the fastest possible network at the lowest possible cost.