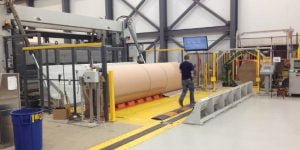 A worker removes rolls of corrugated paper produced by Pratt’s Valparaiso mill which saves 20,000 trees and diverts 3,500 cubic yards of paper from landfills every day.

Growth and expansion in Northwest Indiana’s manufacturing sector is so much more than a symbolic ribbon cutting, a few shovels stuck in dirt, and a groundbreaking ceremony.

Manufacturing remains a key economic engine in this region, and in Indiana, producing more than $90 billion to the state’s gross domestic product. In addition, manufacturers in Indiana account for 29.5 percent of the total output in the state, employing 17.1 percent of the workforce, according to the Indiana Manufacturers Association.

Indiana a leader in manufacturing

Indiana has the highest concentration of manufacturing jobs in the nation, which has helped our state add nearly 325,200 new private sector jobs (including 93,600 jobs in manufacturing) since the lowest point of Hoosier employment during the recession.

“Companies want to be located near a strong network of customers and suppliers. By choosing to grow in Northwest Indiana, manufacturers are able to save money and reinvest into their operations,” Saltanovitz says. 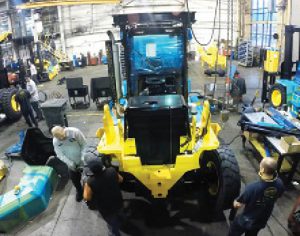 For example, Hoist CEO Marty Flaska cites savings of $1 million annually in workers’ compensation-related costs as one of the primary factors that drove the company from Illinois to Northwest Indiana.

“For more than a decade, we’ve worked diligently in Indiana to build the optimum climate for doing business. That’s especially true for manufacturers,” Saltanovitz says.

This includes companies like Polycon Industries in Merrillville, Ratner Steel at the Port of Indiana-Burns Harbor, NB Coatings in Hobart, Pratt Industries in Valparaiso, MonoSol in Portage, and Hoist Liftruck in East Chicago.

“For Northwest Indiana, this kind of growth is helping attract more great-paying jobs to our region. For example, the average salary at Hoist Liftruck is $55,000 per year,” Saltanovitz says.

By keeping taxes low, slashing red tape, balancing our state budget (with strong reserves) and maintaining a AAA credit rating, Indiana is earning national recognition as the best place in the Midwest—and the fifth best place in the nation—for doing business.

In fact, between 2011 and 2016 more than 100 companies worked with the IEDC to expand their businesses in Northwest Indiana, making plans to invest $1.4 billion into the region and create upwards of 6,000 new jobs in this region.

What expansion brings to business

MonoSol manufacture of water-soluble films headquartered in Merrillville is expanding their DuneLand facility in Portage to increase their output by 15% and move to 24-hour, seven-days-a-week operations.

“Expansion is always a good thing for manufacturers in the United States,” says P. Scott Bening, president and CEO of MonoSol, LLC. “It means we are growing, and it means we can build more facilities, hire more employees, and contribute more to the local community.”

For MonoSol, it means the company’s recent growth has provided additional resources to test and enhance its product offerings which, in turn, helps officials assist its customers to deliver category-changing innovations to their markets.

“Expansion enables us to partner closely with our customers to co-develop new applications for our films,” Bening says. “As we continue to grow, we assure our partners are consistently getting the best quality product, processes and expertise to help them succeed.”

Growth also means MonoSol can hire more workers for every position, from scientists to maintenance to production personnel, bringing even more growth to Northwest Indiana.

“Once our second manufacturing line is completed at our DuneLand facility in Portage, we will have more than 150 line operators, maintenance staff, electricians and mechanics to support continuous 24-hour, seven-days-a-week operation,” Bening says. “The DuneLand facility will expand our manufacturing capacity by 15 percent to meet the increasing global demand for water-soluble films and unit-dose packaging.”

MonoSol, a global leader in the manufacture of water-soluble films, is headquartered in Merrillville and is a division of Japan’s Kuraray Group. The MonoSol Division of Kuraray has consistently fueled its global business growth by placing operations in this region—“the best option available,” as Bening points out. “In doing so, we have spent just shy of $1 billion over the last seven years,” he says.

Roughly $600 million of that figure was spent on non-infrastructure, and more than 10 percent of it specifically was spent in Northwest Indiana. On infrastructure alone, in the same seven-year period, MonoSol spent $200 million, of which over $100 million went to companies in this region.

“We also have contributed to the economy through payroll during this period by adding $250 million to the wages and benefits in Indiana, hiring over 350 people in this period in the region,” Bening says. “Additionally, we will inject an additional $70 million of spending on fixed assets over the next few years along with corresponding payroll spending.”

In the steel manufacturing sector, ArcelorMittal’s global research and development continues its focus on the development of new generation high-strength steels and their application in the automotive, energy, and construction markets.

“Our research centers, including the one in East Chicago, have invested heavily in new and unique test equipment and computer models,” says David White, director of process research for ArcelorMittal’s Global R&D. “This allows us to measure the physical characteristics of these new steels, and simulate their end-use performance before they are manufactured and shipped to the customer.”

Michael O’Regan, public relations director for Pratt Industries, says his company’s growth is designed to increase its manufacturing footprint, its capabilities in the Midwest, and to support its many customers in this region. “So building this mill in the heart of the Midwest was a perfect fit for our aggressive growth strategy,” he says. 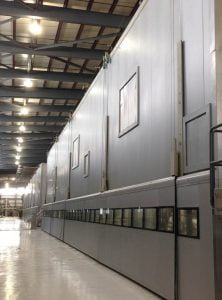 It’s the single largest investment—$260 million—Pratt has made in the United States, and it has increased its annual revenues from roughly $2.1 billion to $2.5 billion, he says.

The expansion also allowed Pratt to do things differently and more efficiently. “Before we built the mill we had to supply our adjacent box-making factory and others throughout the Midwest with paper from our three other mills in Conyers, Georgia; Shreveport, Louisiana; and New York City,” O’Regan says. “Now, freight costs to the neighboring plant are basically zero, and freight to our other factories in the region is also substantially less.”

“We’re continually looking for ways to improve our recycled paper-making capabilities, and to do so more efficiently,” O’Regan says. “Each new mill we build is technically and operationally more productive than the others. We have built three of the industry’s last four mills in just the past 20 years.”

This newest mill is the industry’s most efficient paper mill, O’Regan says, employing 120 workers to produce 370,000 tons a year—twice the productivity of many competitor mills.

“Also, it is the world’s most environmentally-friendly paper mill and a showcase for the latest in 21st century paper-making technology,” O’Regan says. “It saves some 20,000 trees and diverts up to 3,500 cubic yards of paper from landfills every day. Annually, it prevents more than 700,000 gross tons of Co2 emissions through landfill avoidance. It was also designed to use even less water, electricity and natural gas than its three sister mills.”

In LaPorte, Arconic recently underwent a $100 million, 320,000-square-foot expansion, broadening its reach into the large commercial jet engine market. This growth will also double its workforce by 2019.

The expansion enables Arconic, formerly known as Alcoa Howmet, to manufacture single piece structural parts—components that encase the rotating parts of an engine—that are nearly 60 percent larger than those already produced at that plant.

These new capabilities have broadened the company’s reach into wide- and narrow-body aircraft engines. For example, the new facility will supply structural components for the PurePower and other engines under a 10-year, $1.1 billion contract with Pratt & Whitney.

“Innovation is at the heart of the LaPorte expansion,” Arconic chairman and CEO Klaus Kleinfeld said in a statement. “We combined some of the world’s best metallurgists, product engineers and manufacturing experts to broaden our capabilities and deliver the highly advanced components our customers need to build jet engines at high volumes.”

The ripple effect of local investment

Bening, from MonoSol, echoed other leading manufacturing firms in this region by noting that investing locally provides incentives, and the means, for contractors and suppliers to invest in people, innovation and infrastructure to feed this wave of growth. “This makes the region our primary focus when we plan expansion,” he says. “It has worked, and our growth creates opportunity for more growth.

Growth affords all of these firms the resources, including capital, facilities, equipment and personnel, to expand their offerings while contributing to customers’ competitive advantages.

“For example, we recently announced our partnership with Pacific Shaving Company in the creation of their new single-use shaving cream minis,” Bening says. “In October, 2016, we announced our new film technology for personal care products and cosmetics. Within just a few months, we’ve already enabled a partner to launch a brand new innovation in the shaving cream market and begin sales commercially at Target stores.”