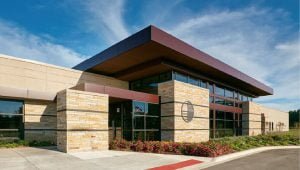 Every business, municipality and school corporation in Northwest Indiana plays a part in the tremendous use of natural resources, and each has the potential to decrease the environmental impact and dependence on products that can have a negative effect on the planet in ways both large and small. Green practices continue to grow in all facets of our lives, and citizens are looking to the business world for examples of how to be mindful of what we will be leaving for future generations. In Northwest Indiana, steps are continually being taken to find solutions and preventative measures so we can be proactive when it comes to being environmentally conscious.

Urschel Laboratories’ newest facility was designed to incorporate energy-efficient features and to infringe as little as possible on Chesterton’s natural Coffee Creek area.

The century-old manufacturer of precision food cutting equipment had outgrown its second site in Valparaiso, which was built in the 1950s, and in 2011 began the process of planning for relocation. “We couldn’t expand any further and looked for a new site,” says director of manufacturing Bill Schott, who served as the company rep in working with builder Tonn and Blank Construction in Michigan City. “It was a wonderful project and we were very pleased with the overall result.” The new 370,000 square-foot manufacturing facility opened in 2015 after an 18-month build project.

According to Schott, the creek borders the property and in the planning stages they were cautioned by locals to be kind to the environment. Access to the property necessitated a retention pond and a road extension, and a bridge built over the creek allows access with little impact on the surrounding land.

Building construction included extensive use of windows for natural lighting within the office and the shop. “We wanted to do some best practice things to keep our energy usage low, like a lot of downward lighting and LED lighting inside and outside,” Schott says.

In the new building, there’s a designated indoor space for scrap. “This wasn’t able to be accomplished at our older facility. Scrap metal and shavings were kept outside under an awning so the trucks could have access to the dumpsters,” says Schott. “With the new facility being so close to Coffee Creek, we really wanted to house all of these items under roof. Today we can be confident that none of this manufacturing waste is exposed to the outside, and our environmental health and safety manager, Jennifer Brooks, has even been able to start a composting program that’s really become a source of pride.” 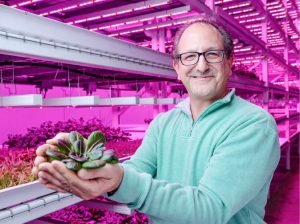 Robert Colangelo has brought futuristic farming to Northwest Indiana through vertical indoor gardening that uses less of everything to produce more. He’s the founding farmer and majority shareholder of Green Sense Farms, which supplies leafy greens, microgreens, baby greens, herbs and lettuces to stores and restaurants in Northwest Indiana and Chicago.

“We have towers that go to 24 foot with hydroponic tubs where we grow produce year round and it’s pesticide and GMO free,” says Colangelo. The system of hydroponics allows the plants to thrive through the root system without using soil. It results in a much higher density of crop, as artificial lighting can provide light for more hours of the day. The weather and insects become a non-issue and the possibility of contamination through run-off from fertilizer is eliminated. The crops are sold locally to minimize transportation costs.

“The goal is to recycle and have zero waste,” says Colangelo. “We don’t use pesticides. We re-use water and nutrients. It’s very hygienic. We purify our water and our air.”

Another farm is being built in South Bend, in cooperation with Ivy Tech, to train job-ready graduates for the food service, produce and agriculture industries.

“Our goal is to build a brand that is nationally known and locally grown,” says Colangelo. The company is now expanding and building a network of farms in the U.S. and Canada, as well as Scandinavia and Asia Pacific.

“Personally, I feel that water is going to be the issue of the decade,” he says. “We’re going to come to some critical choices—for industry, drinking or agriculture. I feel our water conservation processes make us the modern farm for the future.”

It was in 2013 that Green Sense Farms began, but long before that, Colangelo was thinking green. For the past eight years he has hosted a nationally syndicated radio show that is available on 37 stations, including Lakeshore Public Radio and WBBM Chicago. 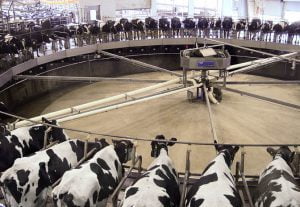 Fair Oaks Farms, Fair Oaks, collects and converts animal manure to biogas that powers their farm and fleet of equipment. In 2016, the farm used 2.5 million gallons less in diesel than in previous years.

Fair Oaks Farms was recently awarded 2016 Overall Member Business of the Year by South Shore Clean Cities based on their greenhouse gas emissions and gasoline gallon equivalents reduced over the course of the year. In 2016, the farm used 2.5 million gallons less in diesel than in previous years. That decrease comes from the use of animal manure to power the farm and fleet, according to marketing and special events director Leslie Rusk.

“Both cow and pig manure are pumped into digesters and it spends 14 days there. During that time, it produces a biogas that is 63 percent methane and we harvest all of that gas,” Rusk says. “The initial use of the gas is to power methane-powered generators, which provide our internal electricity needs. Each 3,000 cow pod can produce enough electricity to power 750 homes. So, on our total farm we can power a city of roughly 10,000 homes.”

Fair Oaks Farms developed a technology that uses water and pressure to create a biogas that is 98 percent methane, which is natural gas. The natural gas is sent to the gas station where it is compressed and becomes compressed natural gas (CNG). The farm runs 42 over-the-road 12-liter tractors with CNG engines. It translates to a 50 percent reduction in the carbon footprint from diesel.

Because it is produced on the farm, the gas is classified as RCNG (renewable compressed natural gas). By comparison, the difference in price versus diesel is upwards of $1.50 per gallon.

Gary Corbett, CEO of Fair Oaks Farms, notes that less than two percent of the population makes their living from production in agriculture. “The responsibility falls on our shoulders to meet the challenges of the future,” he says. “With increases in population and the need for an increased food supply, we’ll have to do it with less land, questionable water in some parts of the world, and weather and temperatures that are always changing. The only way to accomplish that is a lot of innovation, creativity and technology.”

As part of Fair Oaks’ growing venture that will include a hotel expected to open in spring 2018 and fruit orchards that will be ready for picking that year, the company continues to increase production and utilize what is in their own backyard. The Farmhouse Restaurant, a farm-to-fork concept opened in 2015.

“We’re in so many aspects of agriculture that we could embrace farm-to-table because we grow a lot of these products,” Corbett says. “We feel we could do 80 to 85 percent sourced on the farm. That’s our goal—with dairy, meat and vegetables. It’s a popular concept right now and was very easy for us.” 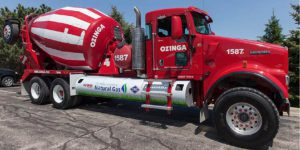 Carl Lisek is executive director of South Shore Clean Cities, a nonprofit organization whose mission is to “preserve and revitalize Northern Indiana by promoting the use of clean fuels and clean vehicle technologies,” according to their website. The coalition originated in 1999 and since then, Lisek says he has seen huge gains in green technology in Indiana in terms of petroleum reduction. The U.S. Department of Energy’s clean cities coalitions are designed to reduce petroleum consumption in the transportation sector by advancing use of hybrid electric vehicles, alternative fuels and vehicles, idle reduction technologies, fuel blends and fuel economy.

South Shore Clean Cities recently recognized local leading members for their influence in increasing the use of clean fuels and clean fuel vehicles, reducing dependence on petroleum use and imported oil, and improving air quality. Among those recognized were the City of Hobart with the Green Fleet Community of the Year Award; International Brotherhood of Electrical Workers 697 in Merrillville with the Sustainability Leadership Award; and Matt Chlebowski, director of central services for the City of South Bend, for Clean Fuel Visionary of the Year.

In our interview with Lisek, he also lauded Tri-Creek School Corporation in Lowell, who is working to reduce emissions in school buses and is applying for a grant to help with installation of solar panels. “We see (Tri-Creek superintendent) Dr. Howe as a leader, where she’s not only implementing services into schools, but also bringing it into the classroom and educating students on different green applications,” Lisek says.

While a concern for the environment is a huge factor in green initiatives, Lisek emphasizes the ongoing dependence on foreign fuel. “We still import over 150 billion dollars a year of fuels,” he says. “People don’t realize how much we’re contributing to foreign countries.”

Beyond working with businesses, communities and schools, Lisek says that they’re working more to reach out to the public to spread awareness on how individuals can make a difference as well. In March, South Shore Clean Cities partnered with NIPSCO and Nissan to offer a $10,000 discount for NIPSCO customers and employees on purchasing a Nissan LEAF in addition to the $7,500 available as tax incentives. He says that efforts are also being made to develop uniform signage to direct motorists to stations for fuel alternatives.

Lisek encourages drivers to minimize car idling and be diligent in maintaining vehicles, following manufacturer’s guidelines and disposing of oil and filters properly. “It’s more the little things than big things,” he says. “How do you eat an elephant? One bite at a time.”

LEED, or Leadership in Energy and Environmental Design, is the most widely used third-party verification for green buildings, with around 1.85 million square feet being certified daily.

LEED works for all buildings—from homes to corporate headquarters—at all phases of development. Projects pursuing LEED certification earn points across several areas that address sustainability issues. Based on the number of points achieved, a project then receives one of four LEED rating levels: Certified, Silver, Gold and Platinum.

LEED-certified buildings are resource efficient. They use less water and energy and reduce greenhouse gas emissions.

Follow Me
Carrie Steinweg
Carrie Steinweg is a freelance writer, author, blogger and photographer living in Chicago’s south suburbs with her husband and five sons. Her work has appeared in more than two dozen print and online publications.

An author of six books, Carrie has penned three are historical titles, two children’s books (“Into the Night” and “Old 104 Ridges Again”) and “Mom Moments,” a compilation of her parenting columns from the Northwest Indiana Times.

Carrie is a foodie who thoroughly enjoys traveling and visiting new restaurants and craft breweries, attending food festivals and trying out new recipes and kitchen gadgets. She writes about her food experiences at ChicagoFoodieSisters.com, a popular blog launched in 2011.

Follow Me
Latest posts by Carrie Steinweg (see all)