You are here: Home / Articles / Getting to Know the Farmer Behind Your Food 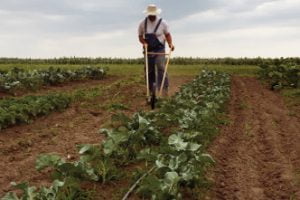 “We grow virtually anything that will tolerate our climate. Last year we grew just over 200 varieties of vegetables, from asparagus to watermelon,” says Nash Bruce of Five Hands Farm in Lowell.

Phoebe Plomaritis says her love for fresh food came from watching her mother Anastasia at an early age.

Anastasia, now in her 80s, is an avid gardener and when the family moved to a farm in Kouts in 1969, she began growing produce for market without the use of synthetic herbicides, fungicides or pesticides.

That practice continues today at Acorn Acres Farm under Anastasia’s leadership and with the help of her daughter, who says the desire to see locally produced vegetables and livestock available for consumption, is the family’s passion.

“Northwest Indiana has such a rich history and the farmland here is also very rich. The Grand Kankakee Marsh is some of the richest top soil in the world,” Plomaritis says.Yet in many ways, Northwest Indiana is a food desert when it comes to access to what this land produces.

Supporting the growing network of small to medium local farms is one way that consumers can help ensure access to locally grown food. Plomaritis said the farm, which also operates a small shop in Chesterton, serves a wide variety of people ranging from vegans to those looking to know where their food comes from and purchasing meat from humanely treated livestock.

“It’s that desire to know where our food comes from that is fueling the growth of niche farms in the region,” says Anne Massie, board president for the Northwest Indiana Food Council. The council was established in partnership with Northwestern Indiana Regional Planning Committee two years ago as a result of the agency’s 2012 food study.

“A lot of people start their journey because of health issues,” Massie says. “Others want to know how their food is produced and whether the livestock was humanely harvested, before it will become dinner. Others are concerned about the impact on the environment of shipping food thousands of miles to market,” Massie adds.

Massie says access to locally grown produce and livestock offers choices in how people are feeding their families. She says it’s important to find a balance and decide what is important to your family and what you can afford.

“If everyone just purchased 10 percent of their groceries through local producers, you would notice a significant boost in the local economy, along with the environmental benefits and the health benefits,” Massie says. She says knowing a farmer’s growing practices is the only way consumers can truly know what they’re consuming.

Nash Bruce is the fourth generation of his family to take to the fields. His grandfather and great-grandfather grew conventional vegetables and grains. However, that changed five years ago when Nash and his dad, Tom, decided to make the move to organic vegetable production.

“My dad has been an avid gardener all his life. He was looking for something to retire into. I was looking for a small business to start. Our passions collided,” says Bruce. Now the duo farm what he describes as an “intense” three acres in Lowell. “We grow virtually anything that will tolerate our climate. Last year we grew just over 200 varieties of vegetables, from asparagus to watermelon,” he describes.

Five Hands Farm participates in what is known as Community Supported Agriculture, or CSA, a cooperative of local farmers who provide seasonal produce on a prepaid subscription basis. Clients pay an up-front fee in exchange for a weekly half bushel minimum of various produce items.

“It’s pretty popular for the small vegetable farms or market farmers,” Bruce says. The commitment from the community helps provide some financial consistency to small, local farms by guaranteeing income at the onset of the season instead of forcing farmers to rely solely on revenues from farmers markets.

Bruce says specialty farmers share essentially the same goals, to make food accessible and high quality, and to provide food transparency for consumers. “Being able to look a person in the eye and ask them how their produce was grown has a value that is lost in a supermarket. Peeling the curtain back and being able to actually know where the food comes from and where it is grown is really appealing in local food groups,” Bruce says.