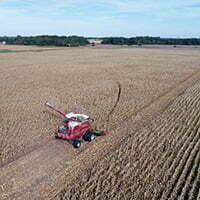 An excessively rainy spring in 2019 drenched farmers’ fields in Northwest Indiana but not their spirits or ingenuity as they did what they always do: adapt to change, find ways to cope and continue to grow.

Add to the equation concerns about tariffs and the trade war with China and no joint trade agreement with Mexico and Canada, and it can look like a tough time for farmers.

Many farmers delayed planting fields or didn’t do it at all.

“In Northwest Indiana, the late spring and wetness was a hindrance to getting crops planted,” says Nicole Witkowski, extension educator for Purdue Extension in Porter County. “Some fields were abandoned all together because it was too late or too wet to plant.”

Most of the farm fields in Porter County — between 70% and 80% — are planted with soybeans and corn. Tomatoes, hay and other vegetables make up much of the rest of the produce.

Because of the rain, the Farm Service Agency in Valparaiso, which serves Porter and Lake counties, is reporting higher numbers of unplanted acres compared to other years. The rain’s effect is measured by farmers who sought access to federal crop insurance for their unplanted land.

“Our office took applications for more than 30,000 acres of corn and soybeans that farmers were prevented from planting,” said David Gottlieb, county executive director for the Farm Service Agency in Valparaiso. “It is just a staggering number. That was more than I’ve seen in my 30 years in this office.”

The agency usually gets applications for about 5,000 acres, he said. 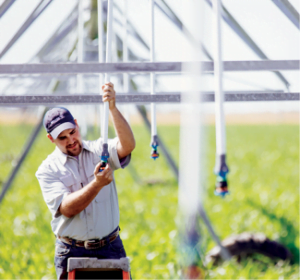 The agricultural division of Chester Inc. in Valparaiso designs large-scale irrigation
systems and works with vendors nationally to get their products to farmers around the country. (Photo provided by Chester Inc.)

With weather, tariffs, pests and other forces that affect agriculture, farmers must be innovative, find new ways to improve yields and protect the viability of their land for the future.

Gottlieb says many farmers who couldn’t plant soybeans and corn in the spring turned their fields over to long root vegetables such as radishes, turnips and grasses. While these cover crops didn’t earn revenue because they were not harvested, they were useful in other ways.

“The cover crops planted by several producers protected the land from erosion and helped with pest control,” Gottlieb said. “It could lead to healthier soil and to new crops (being planted by farmers).”

The rain had another negative impact on many farmers who also are feeling the effects of the trade disputes. Some were unable to apply for aid from the Market Facilitation Program (MFP) which, according to the U.S. Department of Agriculture website, assists farmers with commodities directly impacted by unjustified foreign regulatory tariffs, resulting in the loss of traditional export markets.

Payment rates range from $15 to $150 an acre, depending on the impact of the unjustified trade retaliation in each county throughout the U.S.

Fields that went unplanted because they were inundated by heavy rains were not eligible for MFP assistance.

Tim Stoner, who operates Woody View Farm in Valparaiso, produces firewood, soybeans and wheat. Fortunately, his crop yields this year were not adversely impacted by the wet spring.

“It was certainly a challenge to get everything planted,” he said. “We got the majority planted, and yields have been really good except they were late.”

Since some fields were not planted until June, farmers were under pressure to get crops in the ground.

“There were a lot of farmers working late hours this spring,” said Kyle Burgess, location manager at Kova Ag Products in La Crosse. “They put in late hours and early mornings with little sleep in between.”

One technological enhancement that aided them in their work is simply the size of their machines.

“We can move even faster than we could 10 years ago because of the size of the tractors and planters,” Burgess said. “Farmers can put more rows in and pull anything (behind them) they want.”

Bryan Overstreet, agriculture and natural resource educator for Purdue Extension-Jasper County, said yields of hay were more affected by the rain than were corn and soybeans in his county. There hay is usually sold to hobby farmers who have livestock like horses, cattle, sheep and goats.

Because the hay this year is shorter in size and not of the best quality, Overstreet is advising farmers to add vitamins and other nutrients purchased from feed stores to the hay they feed their livestock. Livestock might be eating a sufficient quantity of hay but not getting all the nutrients they need to be healthy.

“They could be full, but they’re starving to death,” he said.

Overstreet said one technological advancement he sees beginning to take hold in his county is robotics. He said one farmer is using a driverless tractor and predicts more will begin using them in the next few years.

“It will enable a person to be two things at once,” he said. “It will be a huge time saver.”

Another advancement that many farmers are using is drones. Eric Howard operates Bluebird Ag, a crop dusting and drone company in Knox. Farmers pay about $250 per hour for Bluebird to use a drone to look at their fields.

After the spring rains, they were looking for information about conditions in fields that already were planted.

“We measured how many acres were drowned out by the rain,” Howard said. “We flew a lot of acres to see what was coming up and what wasn’t.”

Howard’s company is four years old and has 13 drones.

He estimates he invests about $100,000 in each unit, which also has a trailer, charging system and high-speed computer. The drones are operated by employees with expertise in the technology.

His company is frequently called to help farmers locate a weed, the bur cucumber vine, that is particularly virulent in northern Indiana. It has vines that grow to 30- to 90-feet long, which can’t be broken by hand. The weed is deadly for corn.

“We can find that weed, draw a geo box around it, and the farmer will spray only in that box,” he said. “It saves them chemical costs and is better for the environment.”

He said the drone industry has targeted agribusinesses for their products, but believes farmers are beginning to recognize that drones are costly machines that require know-how to use effectively.

“In the past five years, there’s been a drone high, and they (manufacturers) have targeted the ag market,” he said. “Farmers crash them, or they’ve never had the guts to take them out of the box.”

Overstreet said his county offers a class for farmers who want to get a license to operate a drone.

Farmers also are using drones to determine where crops need more nutrients and which soil is better for planting seeds.

While farmers are used to dealing with day-to-day concerns about weeds, weather and when to plant or harvest, they are always on the search for ways to improve yields. One farm that researches new practices and techniques is the Pinney Purdue Agricultural Center, on 664 acres on the La Porte-Porter county line.

The original 486-acre farm near Wanatah was a gift in 1919 from William Pinney and his daughter Myra Pinney Clark who instructed that it be used for research.

Gary Tragesser manages the farm and says that, through the years, the research done there has contributed to practices that have become common today.

One example is no-till farming.

“That was an important development that was researched here,” he said. “It means the soil isn’t disturbed with tillage implements that turn and mix the soil. It helps reduce soil erosion caused by the wind and water run off.”

Purdue University scientists on the farm are researching the use of micronutrients such as sulfur, zinc and boron that are used in starter fertilizer for corn. The micronutrients are added when seeds are planted.

“Evidence is pointed toward a positive yield process and that it is cost effective,” Tragesser said. “Farmers today are always looking for more cost-effective ways to produce crops.”

Like Tragesser, Burgess of Kova, the fertilizer company, sees interest in micronutrients among farmers.

“Ninety-nine percent of the liquid fertilizer that goes on to corn has a least one micronutrient,” he said.

Use of sulfur that is applied to soybean crops has surged in recent years at his business.

Another practice Burgess sees farmers doing is split-applying another micronutrient in fertilizer — nitrogen. By dividing an application into two or three treatments, farmers are reducing the loss of nitrogen, which is vulnerable to leaching and vaporization.

“They’ve got less chance of losing the investment that they’ve made in their crops,” Burgess said.

Adapting to the market

The wet spring affected other businesses that supply products to farmers.

Rich Shields, director of marketing and business development for Chester Inc. Agricultural Systems in Valparaiso, said his business was slow during the spring. The company sells grain bins, drying equipment and irrigation equipment.

“It (the wet spring) delayed things as far as farmers upgrading their equipment because they were anticipating when they were going to need it,” Shields said.

Business picked up when the irrigation equipment was still needed after fields dried out.

Irrigation can be controlled via an app on a smartphone, which helps farmers send commands and adjust controls. They can gauge, for instance, how much water is being used, when the pivots should be moved, and when to turn water on and off.

This sort of smart technology has been perfected in the last five to seven years, Shields said.

“If a farmer has 50,000 acres and he can’t get to 15,000 of those acres (to irrigate), he can click, click and it’s done,” Shields said. “They don’t have to go to every single field and adjust the irrigation manually.”

With farmers keeping an eye on their bottom lines as they consider what new technologies to use, they can be slow to make large investments.

Farmers, including Tragesser, often want to see proof that new practices or products work before they spend on them.

“They’re willing to invest in them, but they want to see results,” he said. “They want to know those investments will pay off.” 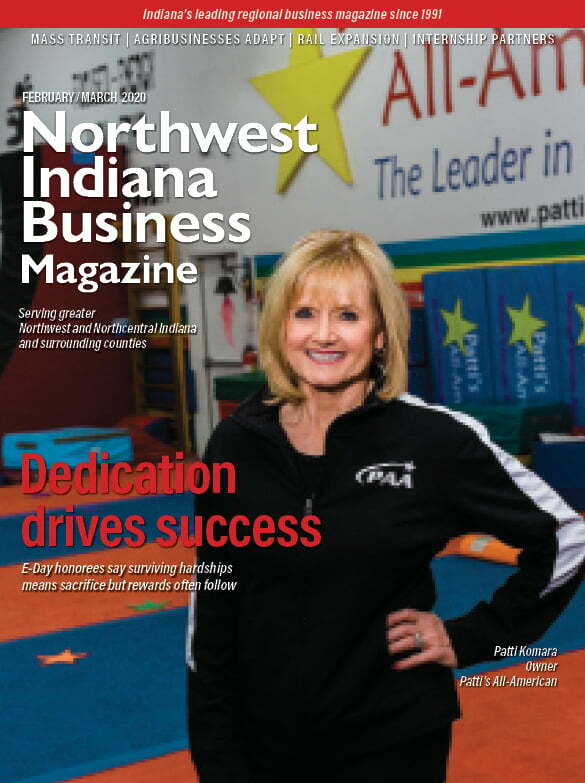