You are here: Home / Articles / Economy in Motion 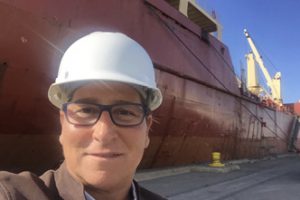 “We wanted to help several ongoing efforts to make the northwest region a gateway to the country,” says Lori Tubbs, president of Commercial Advantage and the public awareness chair for the Northwest Council. Pictured is Tubbs at Port of Indiana where Commercial Advantage leases warehouse space.

Indiana designated “Crossroads of America” as the official state motto in 1937. The slogan began as a nickname for Indianapolis because it’s the hub for several interstate highways that crisscross the state. Those highways connect Hoosiers to the rest of the country.

Ten years ago, state leaders initiated research to determine best practices for attracting new and expanding business to Indiana. The results have created a synergistic team that is making Indiana the Crossroads of America again.

The synergy that is Conexus

Conexus Indiana was established in 2008 as an organization that focuses on advanced logistics and infrastructure throughout the state.

“Conexus functions as a promoter and an implementer,” explains Bryce Carpenter, the director of industrial and community outreach for Conexus. “We work with industry partners to identify common visions for growth that unite Indiana’s advanced manufacturing and logistics community.”

Carpenter stresses that Conexus is an industry-led, privately funded council. “What we do is bring together the industrial and manufacturing leaders in our state and create synergy,” he says. “If we are all pulling together, we accomplish more.”

Early successes include changes to the tax climate that, in Carpenter’s words, stunted growth in the state. “Creating a business climate that encouraged and rewarded business growth was critical,” he says. “The elimination of inventory tax is one example, and the logistics tax credit for investment is another.”

In 2015, Conexus’ Northwest Regional Logistics Council published a report on how to advance Northwest Indiana’s logistics. “We wanted to help several ongoing efforts to make the northwest region a gateway to the country,” says Lori Tubbs, president of Commercial Advantage and the public awareness chair for the Northwest Council.

Tubbs says the local council identifies areas of improvement in the seven northwest counties. “For example, rebuilding the Cline Avenue overpass in East Chicago will be a huge boon for Northwest Indiana,” she says. “We hope to get that project started in the fall of 2018.”

Tubbs says that another area of discussion is US12 and US20 from Burns Harbor through Michigan City. “We’re in discussions about the truck routes along that corridor. There’s options for other development, too. The challenge is always balance.”

The report identifies logistic bottlenecks, opportunities for growth, and increase the public perception of the need to improve and expand the Northwest infrastructure. “Thanks to the passage of HB 1002, the state now has a dedicated fund for road improvement,” Carpenter says. “That’s a major accomplishment.”

The benefit of dedicated road funding 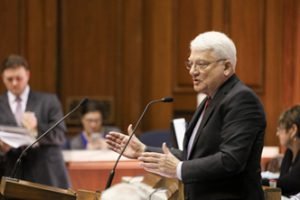 State House Representative Ed Soliday (R-4th) authored HB 1002 to finance transportation infrastructure roadwork, something that he says is critical to the bill’s success.

State House Representative Ed Soliday (R-4th) authored HB 1002 to finance transportation infrastructure throughout the state. The bill is the cumulative result of studies that Soliday began in 2011 and a model his team created in 2013.

“The study we did verified the condition of our transportation infrastructure and the need for road repair funding,” Soliday says. “Everyone knew our roads and bridges were in poor shape but verifying those conceptions with hard data presented facts that were nonpartisan and transparent. That’s important because we needed new revenue sources.”

Gas, diesel, and motor carrier surcharge taxes were long overdue for inflation adjustments, according to Soliday. “When we adjusted those taxes for inflation, it created a significant revenue source,” he says. “The bill also allowed counties to create a wheel tax to generate revenue for road repairs in their respective areas.”

The monies raised through HB 1002 – estimated at $400 million annually – are diverted into a dedicated fund for roadwork, something that Soliday says is critical to the bill’s success. “The money is raised for the specific purpose of transportation improvement, and that’s what it’s used for. Period.”

Because of HB 1002, several road projects are underway to benefit Northwest Indiana. One will transform U.S. 30 into an interstate-like highway with limited access from Valparaiso to the Ohio state line. Another will address railroad crossings in Lake County by building overpasses to alleviate congestion. The efforts to make U.S. 31 a freeway from Indianapolis to South Bend are nearing completion, also a result of HB 1002. 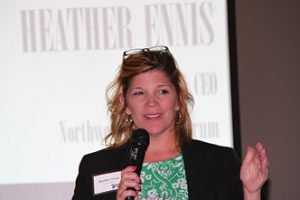 The Northwest Indiana Forum is launching a new marketing campaign touting the Region with the slogan “Welcome to the middle of everywhere”. They’re also launching a five-year economic development plan for the seven-county Northwest Indiana region. They will put together an expansive plan that will collect input from economic development agencies, local governments, big businesses, and residents, then outline action items that can be taken.

“We partner with Conexus and the Indiana Economic Development Corporation to help attract and retain businesses in Northwest Indiana,” says Heather Ennis, president and CEO. “We also partner with the Center of Workforce Innovation to help ensure workforce readiness.”

Ennis stresses the synergy of the groups for the Region’s success. “We work together to bring in new businesses by explaining just how willing Indiana is to go the extra mile. The jobs provided to our residents is the end goal.”

The Forum wants to get the word out regarding the runway expansion at Gary Chicago International Airport. “Jets that are bigger and heavier can now use our airport,” she says. “That can lead to a ripple effect of warehousing and distribution opportunities for businesses and employers. Which means jobs.”

The cost of upgrades

The Indiana Harbor Belt Railroad is a classic example of Indiana’s crossroads capability. From O’Hare airport to the Port of Indiana, the IHB connects to industries and railroads all along the Lake Michigan curve.

“We have 135 industrial customers,” explains Leo Pauwels, director of IHB industrial development. “We connect region industries with railroad lines that do not have a direct line. We move one million cars per year.”

Pauwels says that rail is a fixed entity, in that the country is not building new railroads. “We have to be creative in how we move congestion off our major highways.” The IHB has done just that with just-in-time delivery. “We can move flour from mills to bakeries via local trucks when it is needed,” he says. “Just-in-time delivery has become a major source of growth for us.”

The issue for rail is like other logistics – capital. “If a company wants to move into an existing industrial building, they’re counting on the rail service we can provide,” Pauwels says. “But those existing rail lines need to be upgraded to handle today’s heavier and longer cars. That can be cost prohibitive.” Pauwels hopes the railroad can work with the state government to invent cost-effective ways to conduct such upgrades. “We can reuse many empty buildings in Northwest Indiana,” he says. “We have to make it attractive to the business moving in.”

A phone call comes in. A company is looking to move to Northwest Indiana in the next 18-24 months. They need 100 employees with skillsets ranging from computer technology to CNC programming to warehouse distribution.

That’s when the Center of Workforce Innovation springs into action. “We meet with the company to discuss needs and timelines,” says Sandra Alvarez, a specialist in employer engagement. “We provide data on our workforce, current and the pipeline. Workers in the pipeline are students in high school, college, and vocational programs that will be ready to enter the workforce while a company is ready to turn on the lights.”

Knowing what’s in the pipeline is especially critical when engaging new businesses. “They need to feel comfortable that we know what we will have in a couple of years, in addition to what type of workers are available right now.”

The center engages with local schools to coordinate what they foresee in careers. “It’s important that the different education systems know what businesses will want in the next 2-4 years,” Alvarez says. “That’s how we stay ahead of the game.”

The Port of Indiana-Burns Harbor is in line to receive a $9.85 million federal grant that would help bulk up its infrastructure to handle multimodal containers that can be loaded onto ships, barges, trucks or trains.

The U.S. Department of Transportation is recommending partial federal funding for a $19.7 million expansion that also will boost the port’s cargo handling capacity. The Indianapolis-based Ports of Indiana, a quasi-government agency that’s managed like an independent business, would fund the other half of the cost.

The planned expansion would include a new 2.3-acre cargo terminal for transfers of multimodal containers, 4.4 miles of rail, and two new rail yards that could store 165 rail cars, accommodate a 90-car train and switch trains onto other tracks. Other projects would include the addition of 1,200 feet of usable dock space, a new 6-acre truck marshaling yard, the extension of a retaining wall on the west dock, and the repaving of a dock apron.

What the future holds

The accomplishments to date of Conexus, the NWI Forum, the state government, and the Center for Workforce Innovation are impressive. What’s on the horizon?

Alvarez explains that Ready NWI has a vision called 60 by 25. “By the year 2025, we will have a talent pool available for our Northwest Indiana employers where 60 percent or more of the labor force has a college degree or high-value post-high school credential aligned with employers’ specific needs,” she says. “Having our workforce trained and ready is critical to bring in and retaining our businesses.”

Carpenter says that the optic fiber projects underway in Chesterton and Valparaiso are a prime example of another type of transportation – moving information. “As technology advances, we have to work together to understand the best ways to take advantage locally.”

“We want to help utilize the runway expansion of the Gary Chicago International Airport,” says Ennis. “Many businesses are unaware that the runway is now longer than any single one at Midway. Once they are aware of the opportunities that a longer runway provides, they can come up with creative ways to benefit from it. The important point is getting that information into the right business minds.”

The Crossroads of America is more than a slogan. It’s a vision of logistics and infrastructure creating a thriving business environment for manufacturing, warehousing, distribution, and technology. It creates a state that works for all, employers and employees alike.