You are here: Home / Articles / Creating an Ethical Culture

Trying to make the world a better place, in the workplace and in public service.

In our highly competitive, hurry-up world, we face a continuous barrage of TV news, social media blasts and viral videos with freely shared opinions that can spark conflicts. In response to growing evidence of bad behavior, some area business, government and education leaders are encouraging civility and ethical behavior.

Community Civility Counts was born from an idea presented to the Gary Chamber of Commerce by Executive Director Charles “Chuck” Hughes. He was fed up with negativity displayed at public meetings and societal issues such as domestic violence, workplace discord, and bullying. The Gary Chamber launched the civility awareness campaign a year ago and it's since gone global.

The Shared Ethics Advisory Commission emerged a decade ago when key leaders began discussing issues of ethics in local government. They shared a belief that the public should be able to trust elected officials to behave ethically. When the commission was formed, three communities initially adopted its mission of offering ethics training to government employees. Cal Bellamy, commission chair, says membership now includes 23 communities in Lake, Porter and La Porte Counties.

In the wake of breaches in business ethics by companies such as Enron, Valparaiso University added courses in ethics and values to its master's in liberal studies (MALS) degree program. Jennifer Ziegler, dean of the graduate school, says the emphasis is on giving students an understanding of and sensitivity to contemporary issues of ethics and values in professional fields such as law, health care and business.

All of these efforts are making a difference in our region and beyond.

Hughes, of the Gary Chamber, is a retired fire chief and former city council member who sat through too many contentious meetings. “I felt like there was a lot of angst, animosity and uncivil actions. Elected officials and members of the public were shouting at each other, name calling and blame laying. We just were not acting civil toward each other.”

Hughes wanted to start a civility initiative to help Gary residents have a better attitude toward each other. In April 2015, he presented his idea to the chamber's Public Policy Committee, where it was immediately embraced and became the Community Civility Counts (CCC) awareness campaign. Dr. Gordon Bradshaw, committee chair, created a logo showing five people holding hands while racing to a finish line, with the slogan “Together We Win!” The Times Media Co. has partnered with the chamber to advance the movement.

Hughes says the CCC is fundamentally about abiding by the Golden Rule: Do unto others as you would have them do unto you. “We felt like we wanted people to treat [each other] like you'd like to be treated. The best way to get a desired result that everyone can live with is to be civil. If you're civil in any situation, there'll be less of a chance of a negative result.”

A year later, the CCC campaign has been adopted by countless churches; school corporations; city, county and state government entities; states; and corporations. In April, the first World Civility Day was held at the Majestic Star Casino in Gary. Among the capacity crowd of more than 300 were people from across the United States and three other countries, according to Bradshaw, and plans are underway for a 2017 event.

“We thought it would be a local initiative,” Bradshaw says. “Community Civility Counts has provided a template that other organizations and government agencies can use.” 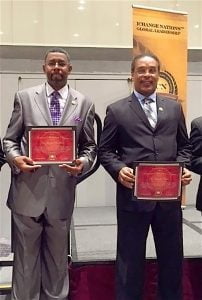 The CCC was honored by the Indiana General Assembly in January, when State Sen. Lonnie Randolph of East Chicago sponsored a resolution commending the initiative. Hughes and Bradshaw were given honorary National Statesmen Degrees by Ambassador Dr. Clyde Rivers of the IChange Nations at a Capitol Hill ceremony in Washington.

In June, Hughes attended a La Porte City Council meeting to talk about the CCC awareness campaign. Mayor Blair Milo had heard about the movement and appreciated its emphasis on treating people with respect and kindness.

“I had received a draft resolution and took it to the Human Rights Commission and they were willing to be a part of the effort,” Milo says. “They presented it to the city council and it was adopted unanimously.”

City government needs to set an example of civility, Milo says. “We encourage and challenge individuals to take the philosophy to other mediums. Social media is where some of the biggest challenges lie. And also bullying in classrooms and workplaces.”

Cal Bellamy, a partner in the law firm of Krieg DeVault, says the Shared Ethics Advisory Commission has endorsed the CCC and both groups are supportive of each other.

“Their approach is broader brush,” Bellamy says. “We're very hands on, down in the trenches with training on specific things.

“We realize that there is a strong relationship between civil behavior, ethical behavior, quality of life and economic growth. If we want Northwest Indiana to grow and be prosperous, we need to project a certain image. We need to focus on quality of life as well as job skills and site development. It goes beyond city limits. It has to be a regional thing.”

The SEAC's volunteer membership is made up of private citizens from each of the 23 participating communities plus three at-large members. The group's goal is to create an ethical culture by heightening awareness of ethical issues within city, town and county governments and by giving government employees a set of practical tools to make ethical decisions.

Commission members promote ethical behavior in the workplace and adopt the commission's Shared Code of Ethics, which rests on four foundational values: honesty and integrity; respect and civility; accountability and responsibility; and fairness and justice. Bellamy says the commission lacks enforcement powers and each municipality addresses issues as they arise.

The SEAC promotes education in ethical behavior through a train-the-trainer approach. Communities send several people to a training session, where they are given manuals and a set of 15 case studies that feature scenarios with embedded ethical dilemmas. These stimulate group discussions on issues such as conflicts of interest, favoritism and public property rights. Following these training sessions, trainees share what they've learned with people in their local communities.

“It's absolutely essential that the mayor, council president and town manager are supportive,” Bellamy says. “They need to approve release time for trainers and for employee training. In every community, we've succeeded in getting top down support.”

The SEAC addresses ethical behavior among public elected officials by asking candidates for town and county positions to sign an ethics action pledge. During the recent primary campaign, nearly 80 percent of the candidates in the three counties signed the pledge, Bellamy notes. The Annual Ethics Summit is another vehicle for the SEAC to highlight the importance of ethical behavior.

“We operate on the philosophy that the overwhelming majority of people in public service want to do the right thing,” Bellamy says, “and usually they don't get any guidance. Ethical decision making is like anything else. You know the basic outline but need it to be brought to specific situations. We teach people to be alert to things that don't seem right and (about) how can they raise the issue.

“This job will never be done. It's a constant need to reinforce right thinking.”

Teaching people to think about ethics and values is at the heart of Valparaiso University's mission as a faith-based institution according to Jennifer Ziegler, dean of the graduate school. The master's degree in liberal studies (MALS) offers courses on ethics and values that are popular with students who have professional experience and want to advance their career or make career changes.

“There's a sense that the master's degree is an opportunity to really grapple with things they experience in their professions and in business,” Ziegler says. “If people have a lot of work experience, they can bring that back into the classroom. It allows them to explore ethical dilemmas and talk about them with other students and professors.”

Valparaiso has been on the leading edge of efforts to get students to think about what it means to be ethical, says James Moore, professor of theology. He teaches a two-semester sequence of graduate courses in ethics and professional responsibility.

“A decade ago we added courses that were specifically aimed at the professional arena,” Moore says. “Ethics is an important dimension of any professional career. We equip them to be ethical thinkers and ethical people within the context of their professions.”

Ed Keleher finished the MALS program in May and is now a counselor in Valpo's Office of Undergraduate Admissions. He enrolled in graduate school three years ago after a career with a family-owned commercial construction business fizzled during the Great Recession. At that point his career goals were uncertain.

“The ethics and values program really grabbed me,” Keleher says. He enjoyed the in-depth discussions that emerged when classes focused on case studies that came right out of current events. “When you open up the paper every morning, you think of how many cases where, if you look at them through the lens of ethics, they wouldn't have to be in the press.” 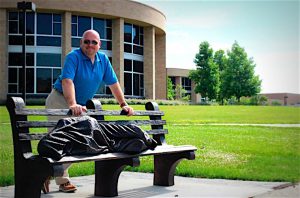 “SOMETIMES STANDING BEHIND YOUR ETHICS ISN’T EASY” Ed Keleher is a counselor in Valparaiso University’s Office of Undergraduate Admissions.

Keleher acknowledges that looking at things from an ethical standpoint is challenging. “Ethics is like a wall. You stand behind that wall and if you allow the wall to flex, it will eventually crumble. Sometimes standing behind your ethics isn't easy.

“It's about thinking of others and not being selfish. We all have to work together as a society.”

Keleher's belief in the value of thinking about and acting on ethical principles is shared by those who are engaged in the CCC and SEAC movements. And the need for their efforts is ongoing, according to Hughes.

“As long as we're human, there will always be a need for an awareness campaign around civility,” he says. “If we continue to make people aware of being civil during times of stress–that may prevent them from doing something regrettable. We're not suggesting we'll cure all of the world's ills. We're just trying to make [the world] a better place for all of us.”