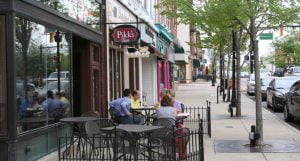 Valparaiso’s downtown has experienced a renaissance. Small businesses have flocked to the downtown filling it with a mixture of restaurants, retail shops, boutiques and more.

Small business is the lifeblood of every city or town, regardless of size. A 2012 study by Civic Economics, a company that analyzes the impact of buying local, found that local businesses are known to have a “multiplier effect” on their communities; for every dollar spent at a local business an average of 68 cents stays in the community, which helps generate an even greater economic value by its ripple effect.

We talked to several smaller communities about the impact of small, local business, from both an economic and a quality-of-life perspective.

Valparaiso’s slogan is more than a catchy phrase. It is a philosophy implemented throughout the business community.

“I have been a small business owner in Valparaiso for forty years,” says Mayor Jon Costas. “I believe I have a good feel for what the residents want from their town and their downtown.”

During Costas’ twelve years in office, the Valparaiso downtown has experienced a renaissance centered on the creation of the Central Park Plaza. Valparaiso also garnered national attention, when the American Planning Association recognized the plaza as a Great Public Space in 2016.

“We wanted to recreate the sense of ownership and inclusion that comes with a public square,” Costas says. “Our residents have provided very positive feedback about the renovations to downtown.”

Small businesses have flocked to Valparaiso and filled the downtown. A stroll down the corridors introduces visitors to a mixture of restaurants with outdoor cafes, retail shops, boutiques, candy makers, a brewery, and the famous Valpo Velvet ice cream shop.

Patrick Lyp, director of economic development in the city, concurred with Costas’ view.

“Our downtown businesses are very stable,” Lyp says. “When we get an opening, it is usually filled very quickly. Most of the shop owners are local people, and that adds to the stability.”

When it comes to success, Lyp believes the proof is in the pudding.

“Visitors and residents vote with their dollars,” he says. “Not just a political vote, but a consumer one. If they didn’t like the direction the downtown has taken, businesses would be going under. The exact opposite is true here.”

Both Costas and Lyp credit the town’s welcoming, inclusive attitude as a major reason for their commercial success.

“Valparaiso University is a very diverse school,” Costas says. “It provides us with a constant opportunity to practice what we preach. So far, the response has been very good.” 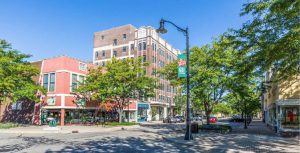 Michigan City Mainstreet Association created the Uptown Arts District, a collective of unique shops, dining, recreation events, and an emphasis on the arts.

At one point, Michigan City made the commercial mistake of closing off Franklin Street.

Chamber of Commerce President Mary Jo Orlowski says correcting that mistake was instrumental in the revitalization of Michigan City.

“For a while, the vibrancy of our downtown district suffered from the street closing,” Orlowski says. “Reopening it brought a lot of business back to the north end, and allowed us to grow.”

The chamber serves as an advocate for small business, creating a friendly environment for both commercial and community endeavors.

“We worked with the National Main Street Center to design and develop plans to foster the growth of small business, create a sense of community, and provide local employment opportunities,” Orlowski says.

That effort, organized as the Michigan City Mainstreet Association, resulted in the creation of the Uptown Arts District. The District is a collective of unique shops, dining, recreation events, and an emphasis on the arts. Galleries such as The Nest and Luberznik Center for the Arts have attracted art lovers from near and far.

“We wanted to create something unique in our community,” Orlowski says. “Northwest Indiana has a strong base of art lovers. That includes poets, musicians, painters, photographers, and other forms. We wanted to build a corridor where they can all work, live, and play.”

The Uptown Center is located on Franklin Street. The building is a majestic church built in 1867. The exquisite architecture is the perfect venue for weddings and numerous events.

“The city has been wonderful to work with,” says Event Coordinator Joy Collins. “The Mayor (Ron Meer) is a frequent visitor and supporter. The city has hosted several events here.”

Contributing to the sense of community, The Uptown Center has hosted several non-profit events, including the American Heart Association’s Go For Red event, which focuses on women’s heart health.

The city of Whiting is more than anyone can imagine. Located on the southern shores of Lake Michigan, the ‘Big Little City’ has become known for spectacular lakefront events such as the Pierogi Fest, the annual Fourth of July Parade, and the Sand Sculpting Competition. This year, they will add the National Mascot Hall of Fame.

“Our downtown business district is flourishing,” says Mayor Joe Stahura. “We want to help the community by adding destination attractions to our city.”

To help facilitate that business initiative, Whiting offers significant grant money to new businesses that qualify as a ‘drive to destination.’

“If your business qualifies as the type of attraction that people will specifically travel to see, we offer much larger grants to help you get your startup off the ground,” Stahura says.

“The downtown business district is the soul of a community,” he says. “If the market will not drive businesses forward, then government should help. That’s what we did with façade grants, building demolition, streetscape, and other initiatives.”

Mind Benders is a unique store located on the 119th Street corridor of downtown. They sell games and puzzles that stimulate critical thinking, memory, and problem solving. “Our games and puzzles are a lot of fun,” says co-owner Amy Bender. “But while you are enjoying the game, you are also keeping your mind sharp.”

Amy and husband Joel went to the city with their business plan that included a detailed explanation of what the store was all about. Their positive experience convinced them Whiting was the right location.

“It was important they understood that we sell brain teasers and thinking games not found in a big box store,” Joel says. “They loved the idea and provided wonderful support.”

Amy and Joel are Whiting residents, and love the way their city responds to innovative business ideas.

Located fifteen miles east of South Bend, Elkhart is built on the banks of the beautiful and scenic St. Joseph and Elkhart rivers. It’s a pleasant mix of country and city. Thanks to the synergy of the Downtown Merchant Alliance, it is also booming.

“Elkhart has a very active Alliance which was established to create a safer and more vibrant downtown,” says Mayor Tim Neese.

The organization encouraged increased communication between business owners and has facilitated an increased number of downtown events throughout the year. “They have maintained a symbiotic relationship with the city and help with event promotion. They understand that downtown events lead to increased foot traffic on Main Street,” Neese says. “That increases revenue for their businesses. It’s a win-win for everyone.”

The Alliance is responsible for the city hosting its first Comic Con in March. The main vendors and entertainers were showcased at the city’s Lerner Theatre. The involvement of other downtown merchants included the local brewery, Iechyd Da, which brewed a special superhero themed beer that weekend.

That type of collaborative synergy among city business and government has resulted in a downtown that is vibrant and entertaining.

Just to the west, the collaborative synergy of Downtown South Bend has promoted and increased small business in their respective downtown area.

“Small businesses make up the fabric of our downtown,” says Jill Scicchitano, executive director of DTSB. “Each business brings such a unique variety and quality of products and experiences.”

DTSB promotes the diverse base of businesses in downtown South Bend through social media and their newsletter. Initiatives such as Downtown Dignity, a new business incubator, First Fridays, and architectural walking tours are all promoted.

“Our small businesses are active in providing great services,” Scicchitano says. “They create an environment providing memorable moments for visitors, employees and residents.”

Crown Point promotes tourism and destination businesses, like the Sparta Dome, which bring visitors to the city resulting in additional revenue for many local businesses.

Crown Point is the hub of Northwest Indiana. It is the center of county government, and has a history dating back to 1868.

It is a goal of the city to aid local merchants in every way possible. The City and its Redevelopment Commission plan to promote the Shop Local campaign with all the tools at its disposal.

The campaign is just one way that the city supports their local small businesses. “We don’t profess to have a secret formula,” Uran says. “We try and get everyone involved at all levels to help put consumers in front of our local merchants. After that, it’s up to the business itself.”

To expound on that vision, the city pushes tourism at every chance possible. The building of the Crown Point Sports Complex, and the Sparta Dome, are two initiatives geared toward bringing visitors in to the city. These types of destination businesses result in additional revenue for local shops.

“A great example is our nighttime St. Patrick’s Day parade,” Uran says. “We wanted to do something unique, so we came up with a nighttime parade with lighted floats. It’s great family entertainment, and helps the local businesses on the parade route.”

The Seward Johnson sculpture exhibits and photo contests also bring in visitors from outside the city. The Courthouse Shops located within the historical court house attract thousands of visitors every year.

Recently, the Indiana Ballet Theater received the deed to a 20,000 square foot building on North Main Street. Engineers and architects are preparing plans for renovation and creation of the Classic Arts Center.

“When we see an opportunity, we try to take advantage of the moment,” Uran says. “It’s all about creating an environment that makes people want to be there.”