You are here: Home / Articles / CEO explores the world

Next adventure always on mind of Horizon Bank chairman 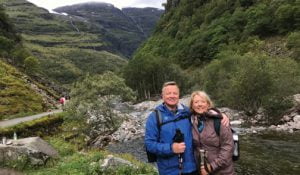 Craig Dwight and his wife, Pamela, traveled to Norway in August 2017 to visit his great-grandfather’s homeland. Horizon Bank’s CEO has traveled the world, including 49 of the United States. Next on his list is a trip to Disney World with his grandchildren. (Photo provided by Craig Dwight)

“My mother always said, ‘never turn down an invitation because it’s also a new opportunity,’ which is a good rule to follow,” said Dwight, who shares his travel hobby passion with his wife, Pamela.

On Oct. 13, the Michigan City couple returned from a 14-day trip to Africa, including time in Tanzania and Rwanda, exploring new cultures and mountain trek escapes. He said their three grown children and their four grandchildren also have inherited the same adventurous spirit.

Of his 39 years in the banking industry, Dwight’s career includes 33 years with Horizon Bank, which has 65 offices, including 15 serving Northwest Indiana.

Dwight was born in South Dakota where he grew up with farming grandparents. In the 1960s, his father moved his family to Michigan City where Dwight graduated from Michigan City Rogers High School in 1975 and then earned his bachelor’s degree in business administration from Indiana University in 1979.

“What’s interesting is that I never grew up with a family who traveled, not even family vacations,” Dwight said. “My dad always worked seven days a week, and my mother was busy with the garden and household, so we didn’t travel.

“Late in life, my father said one of his regrets was never taking myself and my sisters to Disney World when we were growing up.”

Dwight’s great love of travel began in his youth when he would spend summers going back to South Dakota where he worked on his grandparents’ farm, as well as weekend trips with his Boy Scout troop and church group.

Today, he’s visited 49 states, with Idaho the one destination that has eluded his travels.

“A few years back, we were snowmobiling in January through Yellowstone, and we were just six miles away from the state line to cross into Idaho, and almost did, except bad weather prevented us,” Dwight said.

His journey log extends throughout Europe, and he recently added his African expedition, along with other favorite international destinations. He enjoys sightseeing, but also seeks out biking, hiking, mountain exploration, skiing and scuba diving.

“I’ve been able to scuba dive many places, from Lake Michigan to the Caribbean,” he said.

“I learned to scuba dive with our family right here at the Michigan City YMCA, and some of our first experiences underwater was to go (to) a flooded rock quarry, which is really quite challenging because the water is very cold, and as you get deeper, it gets very dark.”

He said he is fortunate, Pamela, his wife of 36 years, has his same adventurous spirit.

“My wife shares my same eagerness to discover the world, both near and far,” Dwight said.

“She learned to snow ski at age 36 and water ski at age 58. We seldom revisit the same place twice because there are so many other opportunities on our very long list.”

Though it’s difficult for Dwight to cite his favorite map memories from among so many, he especially loved the top of Copper Mountain in Colorado for the thrill of skiing to the base, as well as the coral reef scuba adventure he enjoyed while at Grand Cayman Island.

“When you are scuba diving, it’s very relaxing because of the controlled breathing, which makes it a very slow and rewarding experience,” he said.

“You are surrounded by quiet. And when in a coral reef, it’s another world where beauty is all around you.”

He also recalls one of his first “pinch me, is this really happening” moments, which was about 1980 during his first trip to Paris.

“I remember having coffee just across the street from Notre Dame Cathedral and thinking about how I wrote about this same destination in my high school French class for an assignment about the greatest cathedrals of the world, and suddenly, here I am looking at history,” he said.

One of his most exhausting excursions was a 470-mile bicycle ride for seven days in August, spending nights in a tent.

“Even though I’ve traveled far across the miles, I always recommend how many close and exciting travel opportunities we have right here in Northwest Indiana for exploring, especially at the Dunes and throughout La Porte County,” he said.

Other important travel tips he gained from his absorbed expertise is to always “do your homework and research before a trip to be prepared, but also be willing to roll with the punches and be open to try something unplanned at the spur of the moment.”

“We’ve had our luggage lost or expectations not play out as we had hoped, but you can’t let it ruin a trip or let it frustrate you,” he said.

And as for his father’s dream that one day Dwight would visit Disney World, that “check mark” happened with his wife and his own children in the early 1990s.

“Now, I’ve been talking with my wife that it’s time for us to take our grandkids with us for a Disney trip,” he said.