Keeping the best minds in the region, innovating and leading.

What will it take to keep Northwest Indiana's best and brightest young professionals to remain in this region over the next 10, 20 or even 30 years? To name a few points of criteria, it must involve better paying jobs, enhanced diversification, improved school districts and stronger leadership, they say.

Northwest Indiana Business Quarterly spoke with a few bright, young professionals who plan, and hope, to remain in this region until retirement. Here are their stories.

Matthew Wells
Matthew Wells never figured he would ever want to stay in the Hoosier state after graduating from Indiana University.

“I always assumed I would go elsewhere, somewhere more exotic or diverse,” says Wells, director of the Center for Professional Development and Career Management at Purdue University Calumet in Hammond. 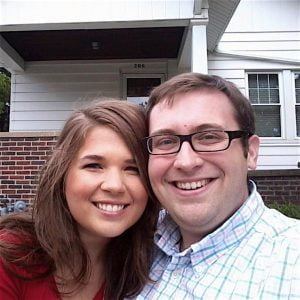 Something, however, changed his planned narrative–his exposure to “the region.”

“Having grown up in Central Indiana, all I heard before moving here was that it was rife with problems, pollution and corruption,” he says. “What I have experienced has been entirely to the contrary.”

Wells, who's 29, and his wife, Erin, relocated to Valparaiso for his first post-college job.

“We knew no one in the area and, at the time, thought this move would be a temporary one,” he recalls. “We'd get some experience and then bolt for greener pastures.”

The longer they stayed here, the less inclined they were to flee.

“We had no idea about the dynamic economic development that was underway in Valpo and other Northwest Indiana communities, with their burgeoning downtown commerce and cultural attractions,” he says. “We were astounded by the natural beauty afforded by the Dunes National Lakeshore and the incredible biodiversity the area presents.”

“We had discovered a true hidden gem,” he says.

Still, the couple also began to realize the region's “forward momentum” is in a fragile state.

“We must continue to attract and retain young professionals to keep these vital efforts on track,” he says.

In his experience, the most critical factors are opportunities for professional growth, entrepreneurship and community impact.

“We millennials and gen xers seem to have a penchant for trying to save the world, and so the opportunity to make a demonstrable impact in a community is an attractive one,” he says. “Another major area for potential development is public transportation.

“Since there has been a movement toward more centralized, downtown living in recent years, expanded public transit would be an attractive recruiting tool for Northwest Indiana communities,” he adds. “I also believe the continued support of quality of life initiatives, such as the Central Park Plaza development in Valpo and the revitalization of downtown Whiting, will make a positive impact on retaining young talent.”

“Our hope is that these trends continue, and that more young professionals will find their niche in the region, so that this hidden gem won't remain hidden much longer.”

Athena Soleim
Athena Soleim was born in Virginia and moved to Valparaiso with her parents in 1989.

The 28-year-old Purdue University graduate earned a master's degree in social work from Indiana University Northwest, and has worked in the residential-behavioral health field since 2010.

“I always pictured myself remaining in Northwest Indiana,” says Soleim, whose newest position is director of clinical services at Campagna Academy in Schererville. “My family and friends are here, and I want to send my future children to the same schools I went to.”

She enjoys many amenities here, from the cost of living and unique offerings to proximity to Chicago and inexpensive home prices.

“My goal is to grow as an executive at my current job. Ultimately, I plan on becoming a CEO of a hospital at some point,” she says.

But will that future hospital position be located in this region? Yes, she believes.

“I am likely to remain here … my family and friends will be here,” she predicts. “I enjoy all this area has to offer. To me it is never boring and I find new things all the time.”

This area made me successful and I want to continue to give back as well due to my success.

“My thoughts are always about giving back to the area that helped me succeed.”

Tyler Carter
The owner of Chick-fil-A in Merrillville was born and raised in downstate Yorktown, which seemed a world away from this corner of the state.

After graduating from Liberty Christian School in Anderson, he studied business at Anderson University, where he first started working for Chick-fil-A. Through college, he worked at a store inside Castleton Square Mall in Indianapolis, before given the opportunity to operate his own franchise in Glenbrook Square Mall in Fort Wayne. 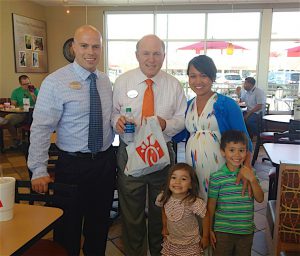 Carter, 34, and his wife kept their eye on another location in the state for a free-standing store. It finally materialized in 2010 in this region.

“So we decided to come check the area out,” he recalls.

The drive along U.S. 30 from Fort Wayne to Merrillville was admittedly “pretty boring,” but when they arrived in Northwest Indiana, they quickly fell in love with this community.

It didn't hurt that the location was “phenomenal” for their new Chick-fil-A store.

“We are right in the heart of one of the best places to shop and dine in Northwest Indiana, and right off of I-65,” he says. “We knew the location couldn't be any better, and that this would be a great place to raise our young family.

The Carters had two kids then, and four kids now.

“We are so happy with our decision to move to the region,” he says. “We plan to continue to invest in and connect with the community in the years ahead.”

This includes their close ties at Bethel Church, and their love for our beaches. Carter would love to open another Chick-fil-A restaurant here, but nothing certain is planned.

“When we moved here, we planned to grow old here,” he says. “I don't know why we would ever want to leave.”

Zach Oehlman
Born in a doctor's office in North Judson, Zach Oehlman moved with his family to a farm in Kouts and was raised to help run a strawberry-growing business, among other rural chores.

“From a young age, I wasn't very focused on education. I thought I was going to work on the farm the rest of my life,” he says. “After I graduated high school, I realized I wanted to travel and be a business owner and investor.” 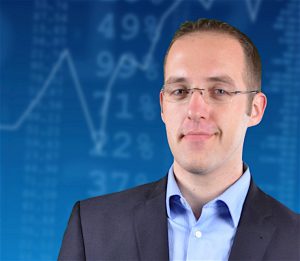 “I WOULD NOT BE HERE,” says Zach Oehlman, president of No Limit Investing Inc., “if not for the people who helped me get to where I am.”

At 30, single with no kids, he has spent most of his time studying at schools and on his career as president of No Limit Investing Inc., a financial investment firm.

He earned a degree in business administration and financial information systems from Indiana University Northwest. His plan was to work for a hedge fund or private equity group, but he couldn't find a position in these industries.

“So I took a position with a real estate investor that specialized in historical rehabs and tax credits,” he says.

After that position, he took a job as a commodities broker at the Chicago Board of Trade, but he didn't like the atmosphere. He then took a job as a valuation analyst, dealing largely with theoretical finance.

“I loved it and became very successful with it,” he recalled.

He later founded his own firm and today operates five different businesses, all based in Kouts of all places.

“I still live and work in Northwest Indiana because of the people and the relationships I have built over time,” he says. “When it comes to business, I am nothing without my relationships and I value them more than anything.”

“I love living here because of its proximity to Chicago and also to wide open fields,” he says. “One day I can go floating down the Kankakee River, and later go to Chicago for an event. I get my peace and quiet without giving up my proximity to my resources.”

What will it take to keep him in this region?

“The people,” he replies. “I would not be here if not for the people who helped me get to where I am.”

Drew Mitchell
The Minnesota native's first step in Indiana was at Notre Dame, where he attended as an undergraduate studying finance and computer applications. Following graduation, he was the youngest employee at IBM's 350-employee corporate headquarters campus in Armonk, N.Y.

Mitchell credits “love” for bringing him back to this region, after being selected for Korbel Champagne's “Perfect Proposal” contest, which aired on NBC's “Today Show” in 2003. He became engaged to his wife Denise, who was living in Chicago, and he then returned to Notre Dame to obtain his M.B.A. 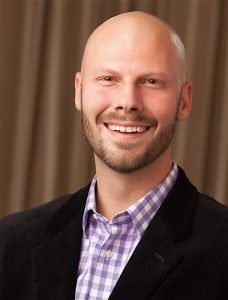 During that schooling, he acquired single-family homes around the Notre Dame campus, founding a company called Rent Like a Champion, which connects football fans with a weekend rental home near the university.

“The real estate bug had bit me,” says Mitchell, who appeared on the TV show “Shark Tank,” where he successfully pitched his Champion business venture to two billionaires.

He also obtained an internship with Holladay Properties, based in South Bend, where he is still employed.

His most significant project in the works is the Promenade at Founders Square in Portage, a 300-plus unit featuring a mixed-use and amenity-rich development.

“It will redefine area residents' understanding of quality urban residential development, and I believe it will make Portage the envy of its neighbors,” he says.

“The business climate in Indiana is very attractive, relative to several of its tax-laden, regulatory-rich neighboring states,” he adds. “This creates unique opportunities for business growth, which leads to career advancement and job opportunities for Hoosiers.”

Mitchell cites our region's assets for luring him to stay here as he ages.

“I believe we have a very strong business climate that is only improving.”