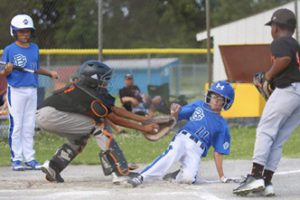 “Last year we had roughly 10 to 11 teams (in tee-ball, minor league and major league), and that was about 200 kids. We’ve had up to 500 kids. So it’s dwindling down little by little,” says Kevin Bradley, president of Gary Metro Little League.

Springtime again, and there’s no doubting what Kevin Bradley’s fancy turns to. Baseball is his thing and has been for four decades.

The president of the Gary Metro Little League first put a bat to a ball when he was just four years old, and the ball sat on a tee. From tee-ball he progressed to little league, then high school ball at Lew Wallace High, and then college ball at Lincoln Trail Junior College in Robinson, Ill. Now 45, Bradley still marks his springs and summers by the porch-swing rhythms of America’s great pastime.

“My parents took me to play, I had uncles that played. Needless to say, baseball is my passion,” he says.

It’s why the Gary firefighter is the varsity baseball coach at Thea Bowman Leadership Academy Junior/Senior High in Gary.  It’s also why he’s been the president of the Gary Metro League, which was the Gary Midtown League when Bradley played in the league growing up. For three years, he’s tried to keep participation numbers up, just as youth baseball coaches and league officers struggle to do the same nationwide.

It’s hardly breaking news that baseball, as an American staple, has been losing steam. The decline in youth baseball participation stretches back at least a quarter century. By its own numbers, little league participation crested in the 1990s, when about three million children played youth baseball and softball. That number sits at 2.4 million today. According to a 2014 Wall Street Journal study, participation by young people between the ages of 6 and 18 sagged by 7.2 percent between 2008 and 2012 alone.

There are any number of reasons for the decline in little league. Among those reasons, are the options now available to kids which didn’t exist when men like Bradley were growing up. One of those options is reflected in the rise of both youth soccer and AAU basketball.

So what are youth baseball executives doing to combat this trend? Bradley, for one, does what he can.“Yeah, it’s dwindling down every year,” he admits. “Last year we had roughly 10 to 11 teams (in tee-ball, minor league and major league), and that was about 200 kids. We’ve had up to 500 kids. So it’s dwindling down little by little,” he says. “But we’re trying to do what we can to keep baseball going in this area.”

That’s important, he feels and not just because he and his fellow Metro League coaches and officials grew up playing baseball.

Clark Troupe, for instance, played as a kid and in high school at Gary Westside. Two decades ago, he was an assistant baseball coach at both West and Thea Bowman. Now he’s been coaching in the Gary Metro League for a decade, finding in it an opportunity that goes beyond just teaching the game.

“For me, outside of the sport itself, it’s being a good role model for the kids,” he says. “Helping them overcome obstacles. I try to be available for them. I try to be there.”

To that end, they sell baseball as hard as they can, going into the schools, advertising in the newspapers and social media.

“Most of the kids, they want to play,” Bradley says. “But then the parents are not interested in it. So we try to keep the parents informed about baseball as well.”

You can ask Clark Troupe about that. “Each year, you know, I watch the kids grow,” he says. “The kids I have right now, when I started with those kids they were 6 and 7 years old playing tee-ball. So I’ve watched them grow. They’re becoming young men now, and I enjoy seeing them be productive. Good athletes of course, but good students, just overall good kids.”