You are here: Home / Articles / All eyes on Northwest Indiana

Northwest Indiana’s location at the crossroads of America, a ready workforce and proximity to Chicago keeps the Region in high demand for commercial and industrial development, economic development professionals say.

Karen Lauerman, president and CEO of the Lake County Economic Alliance, said the organization is averaging about eight to 10 calls weekly on real opportunities in the industry sector, meaning they are true projects looking at Lake County, Northwest Indiana or Indiana as a whole.

“They are not kicking the tires or asking the preliminary or more general questions of tax climate, incentives, etc.,” Lauerman said.

“These companies are making significant strategic moves that cost money, and if relocating can give them a better return on their investment, maintain or recruit a quality workforce and meet other key criteria, then the logical choice is Lake County,” Lauerman said.

Between Dec. 20, 2020, and Dec. 20, 2021, LCEA facilitated more than $150 million in investment, creating about 1,110 new full-time jobs, working on almost $1 billion in development. The 25 most active projects could result in more than $240 million of initial capital investment and another 2,000 jobs if and when landed, Lauerman said.

Cold storage is a hot commodity, along with e-commerce. However, it is important to note that manufacturing operations with distribution of product is just as critical.

Lauerman said, for example, the agency is entertaining three leads that are all automotive-related suppliers that need to manufacture and distribute their product.

“So, it’s not limited to big multi-tenant warehouses or e-commerce,” she said. “It’s really about getting a product, whatever that product is, to market.”

Lauerman said Indiana is recognized for its manufacturing capabilities.

“Our workforce knows how to get things to market, so any operation that needs those qualities has an additional advantage when looking in Lake County,” she said.

Lauerman said the Region’s established Class A business parks, those in the planning stages and land along Interstate 65 draw national and international attention, along with any available, developable land space on or just off the Interstate 80/94 corridor, are highly sought after, along with state-line locations. Lake County, with its convergence of infrastructure is conveniently located and meets most site selection criteria.

What the numbers reveal

Aaron McDermott, co-founder and president of Latitude Commercial, said in his firm’s annual state-of-the-market report that industrial sales volume significantly declined in 2020, but not for lack of interest from developers and businesses.

This is the first time the price for square foot has declined since the first quarter of 2016, according to the market report.

“These numbers should not be viewed as any sort of warning sign as there was a significant decrease in available properties for sale during 2020 as compared to 2019,” McDermott wrote in the report.

Available square footage for industrial property in the fourth quarter of 2020 was at the lowest level since they began recording these figures in 2005, he said in the report. Months on the market hit a five-year low in the first quarter of 2020, increasing slightly in the second quarter and then leveling out for the remainder of the year.

Lauerman said, while LCEA, developers, companies and others are all ready to land deals throughout Lake County, delays are happening because of short supply on prefabricated concrete panels and steel needed for construction.

Developers are preordering in anticipation of rising costs and tenant demand for space and trying to play the educated guessing game on what will be the next material to be in limited supply and cause potential bottlenecks, she said.

David Lasser, principal broker with Commercial In-Sites LLC, said industrial land in the Region has several primary uses. Manufacturing of raw materials such as steel or plastics is one.

Another use is food processing, such as Albanese Confectionery Group and Domino’s Pizza, which manufacture product on site and ship from the location, he said. Then there are companies, including Amazon, that are purely distribution.

The last niche is trucking, with trucking companies looking for terminals and parking areas, he said.

“There’s been a boom (in Northwest Indiana) in really all four categories,” Lasser said. Other smaller users, such as steel fabricators, and roofing and plumbing businesses, also fall into the arena of businesses that would use land zoned for industry.

In the past 12 months for land zoned industrial alone, no retail or office, Commercial In-Sites has closed on or is under contract on 17 parcels totaling 265 acres. The projects range from 1 to 45 acres.

“In those 17 transactions, we are seeing all of those industrial land uses,” Lasser said.

Michael Micka, vice president of development for Holladay Properties, agreed with other experts that the regional market is “pretty hot to say the least.”

Holladay Properties has two business parks in Northwest Indiana, including AmeriPlex at the Crossroads in Merrillville. Since last October, Holladay has sold 110 acres in Merrillville and another 55 acres under contract pending closing in December.

Micka said he has worked in the field since 2008, and the average sales are 4 to 5 acres per year. The past 13 months sales have just taken off, he said.

“What’s probably been the biggest driver is other developers are starting to recognize the Northwest Indiana market and are bringing more clients,” Micka said.

Holladay just completed a 50,000-square-foot project in Portage that was built for six smaller-use tenants. The smaller spaces are filling up as quickly as the larger spaces right now, he said.

New construction requires land, and there are only two ways to get it — green fields that require infrastructure like sewer, water and roadways, or brownfields, which require redevelopment and possible remediation.

Commercial In-sites’ Lasser said there is plenty of activity in both areas. Gary, Hammond and East Chicago have seen considerable activity in redevelopment. Hobart, Crown Point and Merrillville are experiencing a considerable amount of new construction, along with Chesterton, Valparaiso and Portage as well.

The market is clearly along the I-80-94 corridor and the I-65 corridor.

Urschel Laboratories built a 300,000-square-foot facility in Chesterton, and Amazon constructed distribution centers in Merrillville and Valparaiso. There is also a lot of redevelopment and new development in Michigan City and La Porte, Lasser said.

“There are a lot of success stories in both,” he said. “From our standpoint, the activity in Northwest Indiana is hot.”

LCEA’s Lauerman said Lake County’s speculative market is actually growing. Dallas-based Crow Holdings Industrial is putting finishing touches on a 279,000-square-foot spec building with the next waiting in the wings.

The Des Plaines, Illinois,-based Missner Group broke ground in September on a 249,000-square-foot building in East Chicago deliverable in early 2022.

“Both of these groups have additional spec buildings planned for other locations next year,” Lauerman said.

The agency anticipates construction to begin in 2022 on a 1-million-square-foot, under-one-roof spec building in the East Chicago Logistics Center, she said.

“These groups and others know that, in this market, if you build it, they will come, and in many cases bring along suppliers, vendors or clients as well,” Lauerman said.

Speculation is not just for big buildings. There are local developers and contractors erecting 15,000- to 65,000-square-foot buildings on spec that don’t stay vacant for very long or in some cases have signed lease agreements before completion of the building.

Despite a low inventory of available space, Lauerman does not anticipate a slowdown in demand.

“LCEA and all our partners have been working to create this type of interest and demand for years,” Lauerman said. “This is our time to shine and capitalize on all our assets and benefits.”

A hurdle for growth

Micka said one of the challenges to creating more inventory is finding the land to build it.

Much of north Lake County is built out, so finding suitable sites for development or redevelopment can be a challenge, he said. As greenfield space dries up, developers are looking more at redevelopment.

“I think that’s starting to happen,” Micka said. “People are saying, ‘hey it’s worth the time.’”

Micka worries the cost of construction could dampen growth in the short term. Construction costs for a new building are about 30% higher than there were 18 months ago.

The global pandemic accelerated demand for logistics real estate across the country by increasing opportunity for sales among online businesses, established brick-and-mortar retailers and e-commerce originators, fueling the need for space.

“What is often overlooked is that retailers and grocers always needed warehouses and distribution facilities to serve their network of stores, keeping shelves full and customers happy,” Lauerman said. “The pandemic simply accelerated the pace for online purchases and the consumer expectation for same-day and next-day delivery for everything from toilet paper to shoes.”

“Most of the product we had on the market is either under contract or going to close, with little available left,” Tubbs said.

She said she has been working as much as possible to entice builders and developers to bring new product to market, but it won’t happen fast enough to meet demand.

“There are not enough existing builders in this market,” Tubbs said, adding she has been trying to pull more builders and developers from out of state to invest in the Region.

Indiana has been doing a lot consistently to attract business to the state over the last decade, she said.

“It’s been pretty active since the (Great) Recession,” Tubbs said. “We’ve always had a lot of companies look to locate here.”

High construction costs have businesses wary of new construction at this time, she said. A few projects are already underway and were able to lock in construction prices before supply chain issues drove them higher.

“Historically folks have wanted to stay near the state line,” she said. “Now all of those sites and parcels have been absorbed and are stretching themselves coming east.”

Tubbs said that, in the past, developers were not interested in northern Indiana sites east of Interstate 65 but now that boundary seems to be gone.

Heading south on I-65, development focuses on Hobart, Merrillville and Crown Point.

“You won’t find developers these days coming in and bringing water and sewer to a location for development,” Tubbs said. “They are going where it exists.”

Tubbs said redevelopment of existing sites has been active in recent years. The sites might need rehabilitating but often have equipment such as cranes industrial users need.

Tubbs said she has been vocal about dwindling supplies of commercial sites around the Region.

“We are turning more people away than securing because of lack of property,” Tubbs said. 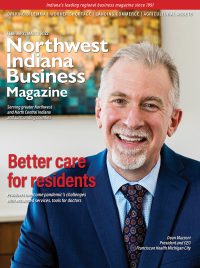