You are here: Home / Articles / A place to make ideas bloom 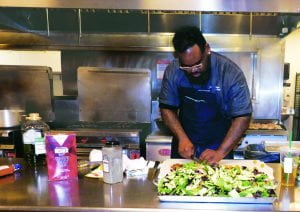 Chastity Shelby isn’t playing around when she divulges the secret ingredient to her wildly popular tea.

“Love,” she said while giggling.

However, Shelby isn’t far off.

In February 2015 when her then fiancé James fell ill, Shelby mixed a glass of tea.

“It came out really great,” James Shelby said. “Then when people came out to the house, she would make some, and they would enjoy it.”

That gave James an idea for Chastity’s tea.

“We approached a local restaurant to see if they would try it out,” James Shelby said. “It sold out on the first day.”

The Shelbys, who are now married, were asked to make more of their popular tea—a lot more.

So, they went to work creating gallons of their product they call “Love Tea.”

They are up to three trade-secret teas and five lemonades, which are offered in 15 restaurants in the Chicago and Northwest Indiana areas. Since August 2018, the Shelbys have been producing and distributing Love Tea out of ArtHouse: A Social Kitchen in Gary.

“We were doing OK, but without the ArtHouse, we definitely would not be able to produce at the level we are now,” James Shelby said. “We are constantly growing.”

He said the business is adding new accounts monthly.

“We’re able to sustain and supply the demand,” James Shelby said. “Without the ArtHouse, we wouldn’t be able to be where we are now. We are forever indebted to ArtHouse.”

The success of Love Tea is exactly what promoters of ArtHouse: A Social Kitchen in Gary had in mind when the idea was first broached. Its founders wanted to create a space that drew in the community for dialogue, entertainment and fine dining, but also be an incubator for business.

“Not only is it a beautiful piece of public art, but it’s a culinary incubator, and it’s a place where we have our micro-business program,” Gary Mayor Karen Freeman-Wilson said. “So it’s a place where people can really develop and hone their dreams to sow in this community.”

The city of Gary applied for a grant through Bloomberg Philanthropies, which former New York City Mayor Michael Bloomberg created.

The city of Gary beat out 200 other cities to garner a grant to transform an underused downtown Gary building to establish ArtHouse on 5th Avenue east of Broadway.

The city of Gary partnered with Theaster Gates, artist and professor in the Department of Visual Arts at the University of Chicago. Additional funding also is provided by the John S. and James L. Knight Foundation’s 2015 Knight Cities Challenge.

In December 2015, ArtHouse issued a request for qualifications for two public art commissions: one to illuminate the exterior of the building and the other to enhance its façade. More than 40 applicants from around the world submitted applications.

Today, the re-imagined building is a colorful, gleaming jewel with thin, bright lights on the exterior. In fall 2018, Michael Bloomberg visited ArtHouse to see the facility himself.

“Even though it’s a piece of public art, it brings life to our community every day,” Freeman-Wilson said.

“They’ve definitely connected us to a lot of people around the city and directed us in the right direction business-wise,” Chastity Shelby said. “They didn’t just give us a kitchen to work out of, they are also directing us along the way, giving us tips.”

Promoters of the Gary International Black Film Festival also use the ArtHouse.

The film festival operated a once-a-month gathering at ArtHouse called “Film and Food Series” in 2018.

“The ArtHouse is in the front door of Gary, which makes it extremely important to be successful,” said Walter N. Jones, board chair of the film festival.

During its gathering, ArtHouse provided a chef on staff to help provide the meals during the showing of an independent film.

“The chef was able to pair the menus to the film, which was great,” Jones said. “ArtHouse has a potential to be one of Gary’s greatest assets.”