You are here: Home / Articles / A carried-away collection 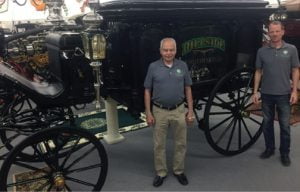 Konnie Kuiper, left, and business partner Kevin Nordyke frame a horse-drawn hearse from 1890, one of the prized vintage transportation gems in Kuiper’s private collection. The carriage was one of the highlights of Highland’s Fourth of July parade. (Photo by Philip Potempa)

It’s not easy for Konnie Kuiper to decide which of his dozens of antique cars and transportation treasures rank at the top of his list of favorite four-wheelers.

But among his first picks is a 1939 LaSalle hearse, carefully preserved and stored in his Northwest Indiana private museum.

“The year 1939 is also the year I was born, which makes this hearse extra special to me,” said Kuiper, whose hobby for collecting cars, carriages, sleighs and assorted vintage modes of transportation began at age 16.

“That first car I purchased as a teen for my collecting hobby was a Model A that I bought for $130.”

Kuiper’s familiar name has been associated with funeral homes in Northwest Indiana since 1957.

After decades of serving families at Kuiper Funeral Home in Highland, which opened in 1969, Kuiper partnered with colleague Kevin Nordyke in 2017 to launch the family-owned Hillside Funeral Home & Cremation Center at 8941 Kleinman Road in Highland.

Kuiper’s wife of 52 years, Karen, and the couple’s children, Laura and Julie, and four grandchildren all share the family pride showcasing and preserving transportation from yesteryear.

In July, Kuiper provided a horse-drawn hearse from 1890 to be one of the highlights in Highland’s Fourth of July parade. Sometimes, he also allows his vintage automobiles to be incorporated into the funeral arrangement requests of families, such as providing use of his 1959 Packard hearse. However, he has never allowed any of his displayed fleet, which includes a horse-drawn fire engine, vintage restored touring sedans and prized sports cars, to be used by movie production companies.

“I want to make sure everything I have is treated with care,” Kuiper said.

“Once you allow a film crew to take control, you never know what might happen when something is on a movie set.”

Kuiper also does not publicly disclose the location of his museum space, nor discuss prices and the value of his collection, with the exception of providing one key clue he has encountered during the decades.

“There is one aspect of car collecting, associated with value, that is always clear,” he said. “As a feature on a car model, when the top goes down, the price goes up.”

Kuiper said his private car museum is primarily used for family functions and events such as company parties associated with his own employees. It’s a business bonus his partner Nordyke has enjoyed as a witness to the wheeled wonders during the two decades he’s worked with Kuiper.

“It’s interesting to see how Konnie’s collection has changed over the years,” Nordyke said.

Some keepsakes he retains because of the memories and sentiment attached, he said.

“Other cars and pieces come and go, with some things sold and new purchases acquired,” Nordyke said. “Some require quite a bit of work to be rebuilt and restored.”

Kuiper, hailed as an authority in both the mortuary field and his collecting interest, attends car sales and auctions around the country, with some of the highlights the international auto events each spring and fall hosted by RM Sotheby’s in Auburn.

“I like meeting and helping people, which is also one of the reasons I love what I do as a funeral director,” Kuiper said. “Every person has a story to share. Both my profession and my hobby let me be a part of other people’s lives to make a difference.”

Kuiper’s other interests include three decades serving on the school boards for the Town of Highland, Highland Christian School and Illiana Christian High School.

“I’ve always believed in the importance that everyone should give back to the community,” Kuiper said. “I love my hobby. But my true dedication comes from (my) profession and always putting God and family first.”