You are here: Home / Lifestyle / Sports / Business / Salute to Business

Success isn’t just a matter of sales and profits. These standouts are committed to helping their communities succeed, too.
by Bob Kronemyer

Investing generous time and creative resources to help make their community a better place to work and live is a common thread among the six major winners of the “Salute to Business” competition, sponsored by The Chamber of Commerce of St. Joseph County. Recipients were honored at a luncheon at the Century Center in downtown South Bend.

“All of the winners have a tremendous ability to recognize needs in the community and a willingness and a real desire to be helpful,” says Paul Laskowski, executive vice president of the chamber. “They have all stepped up and become involved in community boards and other areas of leadership. They truly want to help and use whatever skills and talents they have toward that end.”

Greg Downes, recipient of the W. Scott Miller Distinguished Business Leader of the Year, has been with Gibson Insurance Group in South Bend since 1980. “We have a tremendous culture that has been built up over a long period of time and is based very strongly on our core values,” says Downes, who currently serves as chairman of the board. “Our No. 1 value is the clients come first. We literally live and breathe that every day.” 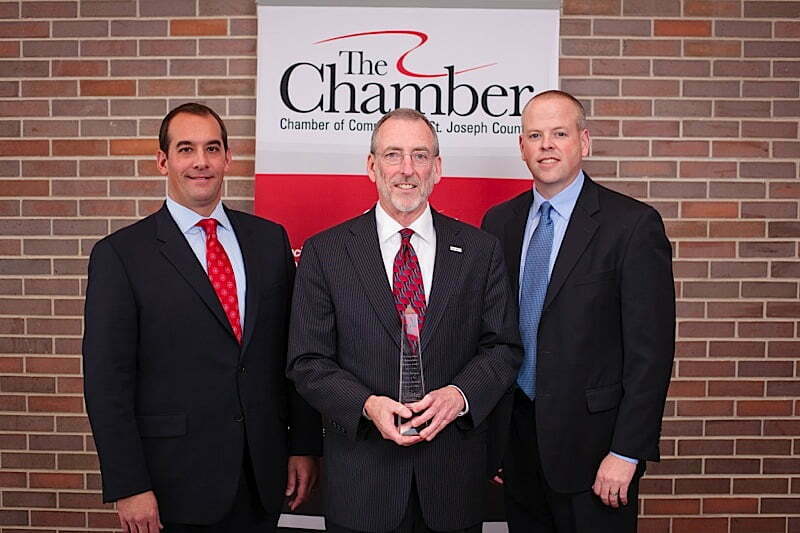 The company’s second core value is that integrity matters. “Integrity dictates the way we behave professionally and otherwise,” Downes stresses.

He is a graduate of the University of Notre Dame and was president and CEO of Gibson Insurance from 2000 to 2011. Downes also has a long and distinguished involvement with United Way. “It takes a little bit from a large number of people to make a big difference. At United Way, we connect people with resources,” explains Downes, who is chairman of the United Way of St. Joseph County board and is campaign chair of the 2012 United Way drive. “I think to be an active participant in the communities in which you do business, you have to be actively engaged in the not-for-profit world.”

Gibson Insurance also encourages its employees to volunteer. “Get involved in organizations and causes that you really care about,” Downes says. “No matter what business you are in, what is good for the community is good for your business. You develop a reputation and a brand in the community. It also helps you recruit and retain great employees. People want to work for and work with people that share the same values as they do.”

Jacqueline Barton, president and CEO of Specialized Staffing Solutions in South Bend, nominated Downes for the honor because of his “example of a community leader that feels he has been blessed and wants to share those blessings with others to impact the community. I am impressed with Greg’s role as an agent for positive change in St. Joseph County.”

The ATHENA Award is presented to someone who embodies the highest level of professional excellence in his or her career, has devoted time and energy to improve the quality of life for others in the community, and assists women in realizing their leadership potential. Staci Lugar Brettin fits the bill, in large part because of her volunteer commitment in being the driving force behind the 2011 launch of SPARK, an outreach program through St. Mary’s College in South Bend that supports the entrepreneurial capacity of low-income, high-potential women.

“I’ve always been open to any opportunities that come my way,” says Lugar Brettin, a visiting lecturer in management and entrepreneurship at Indiana University South Bend. “I also feel I have the ability to bring together a lot of partners to collaborate, as well as attention to detail.”

Lugar Brettin, who earned a doctor of business management from Anderson University in 2011, urges other entrepreneurs “to invest their idea properly. Speak to people who are in the business that you want to start. Don’t be afraid, even if they are your competitors. Find out what made them successful.”

A support network also is crucial. “This network absolutely needs to include people who are champions for your success,” she says. “However, championing also means being able to say this is not a good idea. You don’t want a ‘yes’ person as part of your network.”
A board member and president-elect for 2013-14 of Rotary International in South Bend, Lugar Brettin often mentors business owners of the organization, mostly men. “Don’t throw away any ideas because you never know,” she says.

“Staci has a lot of passion for community change and helping women,” conveys Martha Smith, the project director for the Women’s Entrepreneurship Initiative at St. Mary’s College, who nominated her. “Staci is always there to offer advice to women and ready to lend a hand in developing a new business or with entrepreneur expertise.”

The Small Business of the Year is Communication Company of South Bend, founded in 1976 as a communications and sound integrator for the school (K-12) market. Today, the business sells, installs and services life-safety, security and communication systems to the healthcare, education and industrial/commercial markets.

Growth can be attributed to “getting the right people on the bus and giving them the free rein to do their jobs,” says president and CEO Dan Schmidtendorff, who joined the company in 1996. “Together, as a team, we’ve grown year after year in both revenues and number of employees.”

The company recently launched a paperless service dispatch ticketing system that when combined with vehicle GPS, allows its service team to hasten response time and use real-time inventory, which ultimately translates into a cost savings for customers. “Find out what you do best, streamline and stay focused at what you do best, and listen to your customers,” recommends Schmidtendorff , who is a member of the CEO-group Vistage. “If you don’t take care of your customers, someone else will. We have also partnered with great manufacturers and customers on innovative projects over the years.”

Phil Damico, director of economic development for the chamber, nominated Communication Company because of its “proactive approach to the community. They have been pretty innovative with their business model. I also think they have some of the brightest young leaders in our community and certainly in their industry. When 75 percent of businesses were experiencing major profit loss during the downturn, they actually achieved a revenue gain. They were not going to accept that the economy was going to get their business down. Rather than being reactive, the company has been very proactive.”

Outstanding Young Business Leader Regina Emberton is vice president of brokerage services at CBRE/Bradley, a South Bend commercial real-estate firm. “Never shy away from opportunities and always step up to fill a role or a need,” urges Emberton, who has prospered by taking educational classes within her industry that has led to two respected designations: Certified Commercial Investment Member (CCIM) and Society of Industrial and Office Realtors (SIOR). 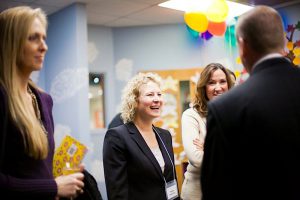 Emberton joined CBRE/Bradley in 1999 as an intern in the market research department. Through the years, she has also been active in volunteerism. Currently, she serves on the board of directors for Downtown South Bend Inc. and Boys & Girls Clubs of St. Joseph County. “I started my career in the economic development realm, so I have a passion for cities developing. I want to be a catalyst for further area growth,” says Emberton, whose undergraduate and master’s degrees have a concentration in community and economic development. And as far as working with children, “I want to make sure they have mentors and the same opportunities as everyone.”

According to Brad Toothaker, president and CEO of CBRE/Bradley, who nominated Emberton, “Regina’s stature in the company as a top producer, management executive and her sustained involvement in the community demonstrate her overall dedication to excellence. She has distinguished herself by deep commitment and sacrifices, and has taken active leadership roles within many community organizations, doing so with honor, integrity and boundless energy. Her enthusiasm, passion and respect among peers make her an outstanding asset to not only our company, but the community as well.”

There were also two Economic Impact Awards in recognition of a company’s strategic vision and its substantial capital investment in the area economy. And although there is not an official nominator for either recipient, the chamber relies on information gathered about various projects, investments, large hirings and other economic signs.

In 2010, Allied Physicians of Michiana began a $15 million renovation project of a 100,000 square-foot strip mall at the corner of Hickory Road and State Road 23 in South Bend, which culminated in a state-of-the-art medical plaza. “Probably the biggest obstacle was that we were not building from a grain field. We took an existing structure and completely redesigned it within the framework,” says Sherry Purkeypile, CEO of the physicians group. Today, University Commons Medical Plaza consists of three buildings (a main structure and a wing on either side) and has 99 percent occupancy. The first practice moved in May 2011.

Purkeypile’s advice for entrepreneurs is to “trust your vision and instincts.” As is the case with Allied Physicians, “you begin with a run-down, almost abandoned shopping center and you envision a thriving medical community promoting healing and health. You trust that it really exists. There are also people who can share that vision to bring it to fruition.” In addition, she is hopeful that her firm’s recognition will inspire others to look outside the box and pursue a project that is slightly unorthodox.

In early 2011, the other economic impact winner, Schafer Gear Works in South Bend, announced a joint venture with Somaschini S.p.A. of Italy to produce engine gears for the heavy-duty truck market in North America. To accommodate increased activity, a new 50,000-square-foot plant was built on the Schafer Gear campus at Nimtz Parkway, which began trial production in November 2011.

The new manufacturing facility is part of a total joint venture investment of $18 million. “We are delighted that we were able to justify building the plant on our existing campus rather than elsewhere, such as out of state,” relates Bipin Doshi, who became president of Schafer Gear in 1988. The plant is expected to be fully operational April 2013. By that time, the workforce should increase from 15 to about 25. 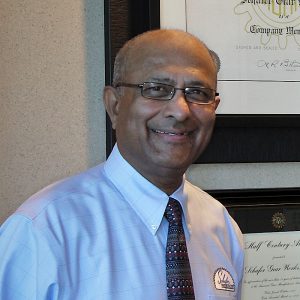 Throughout the years of company expansion, “the City of South Bend has been very helpful, including providing us with tax reductions,” Doshi says. “This was one of the factors for us remaining here.” To succeed, “do your homework right and take some chances in life. Also, be as knowledgeable as you can about what you are doing.”