Do the math and you'll find that husband and wife duo Gary and Shar Miller have operated Prompt Ambulance Service for the last 15 years. In fact, the Millers say the family-owned company started in July 1998. Over that time, the couple has seen the Highland-based firm grow to become the largest private ambulance provider in Northwest Indiana.

“I am proud of what we have here,” Shar Miller, who serves as co-CEO of Prompt with her husband, tells Northwest Indiana Business Quarterly. “We've both put our heart and soul here over the last 15 years. We've grown at a decent rate. We focus on the community and doing what's right. We enjoy being able to make a difference in people's lives every day.” 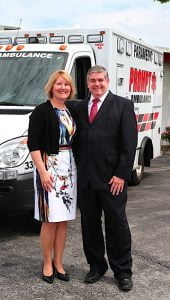 FAMILY HISTORY Shar and Gary Miller have operated Prompt Ambulance
Service for the last 15 years, but the company’s roots go back generations.

But to report that Prompt has been around for only the last decade and a half doesn't accurately reflect Gary Miller family's involvement in the industry from its very inception, and that is not an overstatement. In fact, the lineage begins in the late 1800s when Michael Fagen, Gary's great grandfather, started a furniture store in Dyer. Now, to the curious observer, there doesn't seem to be much connection between ambulance transportation and furniture making.

“When people died, their loved ones would go to the furniture store to get the casket made,” Gary Miller says.

Without a funeral director in Dyer at that time, Michael Fagen and his wife took up the role. Then, as several industries began to develop at the same time, that provided an opportunity for Fagen's family to expand his funeral and medical transport services. As doctors and hospitals started to become prevalent, and as the automobile was invented, the need to transport the sick began to take shape. Through the 1930s and 1940s, not only did the Fagens begin to expand the ambulance service, they also opened a second funeral home in Highland and the much later in Griffith. In 1950, Fagen's granddaughter Maureen married Robert Miller. Eventually, Robert and Maureen Miller took over the funeral homes and its ambulance service. Back in the early days, a hearse could easily be transformed from funeral coach to an ambulance in a matter of minutes.

“We can turn it into an ambulance in about five or 10 minutes. The rollers the casket goes on flip over to make it a flat service (for a stretcher). And then we just mount the red light on the roof of the car with a single wing bolt,” Miller says.

But as the Fagen-Miller Funeral Home business continued to grow into the 1970s, Robert Miller, Gary's father, died unexpectedly of a heart attack at age 50. Robert's widow, Maureen, and her four children, Larry, Jerry, Terri and Gary, all had a role in operating the family's three funeral homes and an ambulance service with three vehicles. Over the next 15 years, the ambulance service grew to 25 ambulances and 24 wheelchair vans.

The merger came at a time the medical industry began to change in the advent of managed-care programs such as HMOs and PPOs. However, as with some consolidations, friction developed as services within the new company diminished, and by July 1998, the Miller family decided to break off from Co*Med to start a new company called Fagen-Miller Medical Transport, going back to the original family name. But change wasn't done. Fagen-Miller merged with a smaller ambulance service based in East Chicago called Prompt. “They were ready to sell so we bought them,” Gary Miller says.

Eventually, Fagen-Miller adopted the name Prompt. For the first year, Shar Miller oversaw the company as her husband was in a sort of exile, since he had a one-year “no compete” clause that prevented him from competing with Co*Med.

After the year was over, Gary Miller assumed the position of CEO with his wife. His other siblings continued operating the funeral home business, with one brother, Jerry, working as a paramedic. Today, Prompt serves 36 percent of Lake County's population. It is the only private ambulance service providing emergency transport for the communities of Highland, Dyer, Griffith, Munster, East Chicago and Merrillville.

With more than 600 employees, 200 ambulances and other transportation vehicles, the Highland-based company handled some 100,000 transports in 2012 alone. The company's reach stretches east to South Bend and south to Lafayette. Municipal work accounts for 12 percent of Prompt's business, the rest being dialysis, hospital-to-hospital or nursing home transfers. Prompt also provides wheelchair vehicles that assist people who only need a ride, not necessarily for medical needs. Much of Prompt's work and dispatches are done from a communications/administration center in Highland.

From there, heart of the communication center looks like a 911 police dispatch center. In fact, Prompt operators handle 911 calls. There are also monitors for real-time traffic and weather reports. “There's a bunch of systems working together here,” Gary Miller says. Prompt also operates a transportation/vehicle maintenance facility in Merrillville from which many of the ambulances are dispatched.

With his friendly disposition and warm smile, Gary Miller says the job brings variety to his life every day. “I think I would be bored if all I was doing was one specific issue. I deal with insurance, personnel, vehicle problems and government affairs,” Miller says. “The variety is interesting to me.”

In dealing with municipalities, Gary Miller says the company does not go after cities or towns to take over their ambulance service. It's always the other way around. For example, the City of Gary is struggling to keep providing ambulance services.

“Municipalities have to provide ambulance service. They have options to do that. A lot do it internally and some do a very good job at it. Others, the costs get out of hand,” Gary Miller says. “We never approach a municipality to take over their work, but if they do decide to privatize, we think we can help them out. Our first discussion is always: How can we help you keep your service?” Currently, Prompt is providing three ambulances for the City of Gary, with two based at city fire stations.

“Hopefully, as their staffing goes up, they'll go from three to four ambulances and we'll go down to one,” Miller says. Shar Miller says much of the work Prompt provides to municipalities is done without tax subsides, with the company being paid through patients' private insurance.

The Millers take pride in seeing many of their own employees grow professionally. “We have a paramedic right now who is going to medical school. We've seen several of our employees eventually become doctors, nurses and expand their careers,” Gary Miller says.

Despite serving a large territory, the company does not anticipate expanding into new markets, Shar Miller explains. “We plan to shore up this area. I think we serve it pretty well, but we like to fill in our territory rather than seeking new markets. There are needs in cities like LaPorte and Michigan City.”

With health-care reform taking shape, Prompt sees its services needed more than ever.

The Millers believe there will be growing emphasis on keeping patients away from emergency rooms, with more aggressive treatment onsite or at the homes of patients. “We have the technology. We'll have Skype or Facetime, we'll be on the scene with the doctor somewhere else,” Shar Miller says.

In essence, medical and patient care looks to be returning to the days of home visits, the Millers believe.

“This is going to happen relatively quickly,” Gary Miller says. “We've already started the wheels rolling in trying to figure out the market and demand.” In the end, it's about helping people.

“When you take someone to a hospital or to a nursing home, you're making a difference in their life at that very moment,” Shar Miller says. “Every day, I go home after helping this person or that person. It's really nice. That's what we try to do. Focus on what's right for others.”