Times have changed, but the chips are as tasty as ever.

It was 1928, just a year before the big stock market crash, when John Norman Hogg started Peerless Potato Chips on West 11th Avenue in Gary. From England, he became a pilot with the Royal Flying Corps in World War I and was sent to Canada to train pilots. He stayed on afterward working around the steel mills in Sault Ste. Marie before following the call of the booming city of Gary.

A few years after opening his chip plant, Hogg, then 47, married one of his employees, Helen Oresik, in her 20s. She was raised just a few blocks away. The family worked hard to make it a success, building the current plant–just across the street from the first–in 1958.

The Peerless Potato Chip brand has been a familiar presence in the area for 85 years, supplying a tasty salty snack to generations. Some folks who have moved away have the chips shipped around the country, especially for the holidays, says Jack Hogg, John’s oldest son and head of the company since 1969, the year after he got home from Vietnam. You’ll have to call in that order though; the company doesn’t have a website. But it is on Facebook, where other folks talk of driving long distances to Northwest Indiana to fill up their trunks with the unbeatable Peerless Potato Chips. 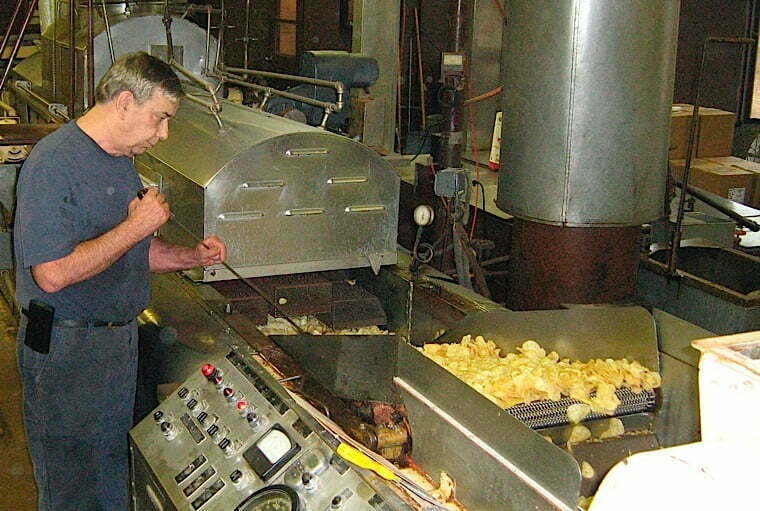 HANDS-ON LEADERSHIP Jack Hogg may carry the title of president, but he still works on the floor tending the fryer.

Hogg is feeling the squeeze as a small producer, always fighting for shelf space in the snack aisles of local groceries; and don’t look for the brand in the big box stores. He’s unabashedly old school, remembering the days when relationships with stores and store managers were more casual. He is constantly reminded by his sales manager that things have changed. The chips themselves are pretty much the same as they’ve always been though, Hogg says. The potatoes are coming from North Dakota right now. In the spring they’ll come from Florida, and in the summer from Southern Indiana and Kankakee, Illinois. Then the cycle starts again.

The mid-’80s brought the last big company change, an expansion of the building to add a loading dock to allow for loose potatoes to come in by the semi load weekly instead of in 100-pound sacks. About the same time, the company’s 1951 Ferry fryer got a makeover with computer controls.

If you want to get a feel for all those potatoes coming in, check out the YouTube video that Jack’s younger brother Scott made for The Chicago Reader’s Food and Drink blog in 2008. He’s production supervisor and has been working at the company for a dozen or so years. Peerless Potato Chips has 15 employees. “People tend to stay two weeks or 20 years,” Jack Hogg says. “They either like it or they don’t.” Is there a younger Hogg generation coming up in the business to take over? “My two boys don’t want anything to do with it,” he says. “They both graduated from college and are both IT guys.” So, in the meantime, the best time to catch Jack is at quitting time. That’s 4:30 p.m., after he’s been on the job since 4:00 a.m.

You might wonder if a man who has been around these potato chips all his 68 years still eats them. “I eat them hot coming off the line,” he says. “I run the fryer. I’m not sitting in an air conditioned office.”