A fast rebuild for the IU Northwest women’s basketball program.

She was a basketball star at Portage High School who was a self-professed “family kind of gal” and so, when she was recruited by Shelton, the women’s basketball coach at Indiana University Northwest (IUN)–12 miles down the road–the appeal was obvious. She’d get to play in front of her family and friends for four years–and she’d get to do it in a program that had some weighty history to throw around.

“I wanted a program that was gonna be successful,” says Monahan, now a senior guard who’s started all 92 games in her career and stands second all-time in career points (1,577).

The latter begins on an autumn day in 2007, not long after the women’s basketball coach was let go and IUN came to Shelton to take on a seemingly hopeless task. The women’s team, if you could call it that, consisted of one eligible player. Ahead lay a 24-game schedule larded with nationally ranked opponents.

Fast-forward a few weeks. Practice had just ended for the day. Shelton had somehow managed to find four more players by calling every female student on campus who had even a passing interest in athletics–not just basketball, but any sport. He knew how full his hands were.

And so, looking at his five players that day, he threw his hands up.

“I actually looked at the girls and said, ‘I really don’t think you guys should do it,'” he recalls.

There was an awkward silence for a few moments. Finally one player–a nursing student from Hammond named Erica Baran–spoke.

“Coach, will you just let us try?” she said.

“The first thought that popped into my mind was, ‘Looks like we’re playin’,” Shelton says. “Because what are you gonna say to that?”

But here’s what else you can say, nine years along: humble beginnings are only that. Beginnings.

By the next season, Shelton had a full complement of players. One of them would emerge as perhaps the best NAIA player in the country–Sharon Houston–who went on to be a four-time NAIA All-American. 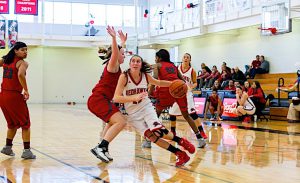 WINNING CLOSE TO HOME Nicki Monahan was a basketball star at Portage High School when she was recruited by Ryan Shelton, the women’s basketball coach at Indiana University Northwest.

It all happened in a blinding flash. That second season, IUN went from 24 losses to 20 wins. Back-to-back Association of Independent Institutions (AII) tournament titles in 2010 and 2011 followed. And in 2011-12, IUN won 16 straight games and beat Chicago State, an NCAA Division I school.

This season, the RedHawks return four starters from a team that went 22-10 in 2015-16. They’ve posted winning seasons seven of the last eight years. In the same span, they’ve won at least 20 games five times.

“That first year, I wasn’t trying to build a program. I was just trying to get through a season,” Shelton recalls.

“I want to keep doing it as long as we’re having fun, have great people academically on our team and be competitive for conference championships each and every year,” he says. “That’s kind of what keeps me going.”