You are here: Home / Lifestyle / Sports / Lessons in the Game of Life 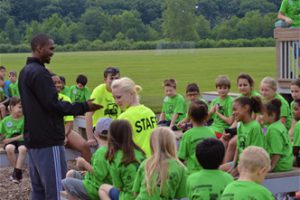 Ron and Reesha Howard’s Game Day Sports Camp is the result of not finding a camp for their daughter, to their liking. Their camp has grown beyond their dreams and receives ninety to 120 children every summer.

Seven years in, they pull up to the door now and out spill the children. Out spill all the things in his life that make Ron Howard smile.

Yet it’s not just the children who are his blessing, it’s who’s behind the wheel of the vehicles that deliver the children to him. Their older brothers and they’re reminders, Howard jokes, that “man, we are getting old for real.” That’s because the Game Day Sports Camp, he and his wife Reesha started seven years ago, has become a generational thing. Back then, Ron, a former standout at Valparaiso, was playing basketball for the Fort Wayne Mad Ants of the NBA Developmental League.

And now the camp, which was the result of the couple searching for a camp for their daughter and couldn’t find one to their liking, has grown beyond their dreams. Ninety to 120 children attend every summer. Howard, now retired from a pro career that took him all over the world, started an additional camp over Christmas break. This camp’s focus is not just on sports, even though that’s Howard’s background.

According to Game Day’s mission statement, it’s about providing an outlet for kids to be kids, to make friends, try new things, and learn valuable life lessons. “We wanted to make sure there was a place where you could send your sport-loving child and your crafting kid or your kid who just wants to come and meet friends,” Howard says. “And then we wanted to make sure they were learning something and talking, so there was a character-building aspect.

Grown as has Howard himself. A 6-foot-5 guard with a knack for getting to the basket, his growth as a basketball player began at Whitney Young High School in Chicago. The teen continued at Marquette for a year then went on to Valparaiso, where he was coached by the legendary Homer Drew.

Eleven years later, Howard and his family have settled in Fort Wayne, where he is the only player in Mad Ants’ NBA D-League history to have his number retired.

But that’s only basketball. What he learned beyond the game, and what’s made him a revered community figure in his adopted home of Fort Wayne, came from his mother who raised Ron and his brother to never get too full of themselves. That lesson, along with the culture created by Homer Drew at Valparaiso, helped Howard blossom into a two-time second-team all-conference guard.

“You hear people always say (Drew) is the nicest guy you’ll meet. And it’s the truth. It was like that every day. So just being consistently true to who you are, being kind, putting that first and being very successful at coaching. I had a great time with the Drew family, felt good about them and how they did things,” Howard describes.

When Howard, who still holds Valparaiso’s single-game free throw record (18), left just over a decade ago, the Crusaders were still playing in the now-defunct Mid-Continent Conference, one of the lowest rungs in Division I basketball. From there they moved up to the Horizon League, and last spring they joined the Missouri Valley Conference, one of the top mid-major conferences in the country.

That upward mobility was due to the basketball program, which Homer Drew built into a national presence that led to nine trips to the NCAA Tournament, and under the guidance of current head coach Matt Lottich, who as an assistant and head coach has won 82 games across the last three seasons going into 2017-18. “It’s great to see,” says Howard. “I’m really happy the program is moving forward in the right direction.”