You are here: Home / Lifestyle / Sports / A Gleam on the Ice 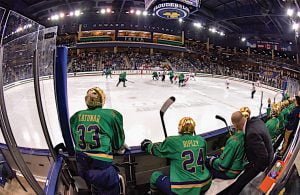 The eye of the beholder begins to gleam, as the beholder steps into this clean, well-lit place. Jeff Jackson has seen it. Mike McNeill, too.

“I don’t ask them directly what their thoughts are about the facility, but when they walk through there, their eyes are pretty bright,” says Jackson, Notre Dame’s men’s hockey coach, of that moment when he introduces recruits to the 212,000-square-foot Compton Family Ice Arena.

“[It’s great] to see a young hockey player, a young person, a young figure skater, walk up the front steps of our building, see the arena, and then all of a sudden somebody says, ‘Yeah, that’s the rink you get to play in,'” says McNeill, the Compton’s programming and instruction program manager on a promotional video for the facility.

McNeill’s is a busy job. The Compton opened in October 2011 as the home of Notre Dame hockey. The “Lefty” Smith Rink seats 5,022 and contains five visitor/auxiliary locker rooms.

The venue also houses an Olympic rink that is 100 feet wide by 200 feet long with 350 bleacher seats and four auxiliary locker rooms. This means it’s not only home to Notre Dame hockey, but to intramural hockey, curling and broomball; women’s club hockey; youth, high school and adult hockey; and figure skating and public skating.

That makes the Compton not only a bright southern anchor for Notre Dame athletics–it sits south of the Joyce Center and west of the track-and-field complex along Edison Road–but also an outreach from the university to the community. It’s a way for Notre Dame to connect with teams from the United States, Canada and Mexico, and with the general public as well.

In the peak winter season, the place resounds with the scrape of blades on ice almost around the clock.

“At the peak of our time, we’re 6 a.m. until 1 [o’clock] in the morning with activity on a pretty regular basis throughout the day,” says Operations Manager David Gilbert, who figures the Compton accommodates “into the hundreds of thousands” in a given year.

That includes fans and students who jam the place for Notre Dame hockey games; members of the community who drop in for lunchtime skating; children and the physically challenged enrolled in the My Tot & Me, Learn to Skate and Adaptive Skating programs; the curlers on Sunday nights; the adult hockey and Irish Youth Hockey leaguers; and the youth hockey tournaments that begin at 6 a.m. on Saturday mornings and run into Sunday night.

When the Compton opened five years ago, Notre Dame athletic director Jack Swarbrick said the athletic facilities would be a special point of contact. “I hope we win national championships with teams that train here, and I hope we build new programs for our athletes and our students. But the ultimate success of this facility will be if we inspire a young boy or young girl from the community to shoot higher, if we challenge them to be better people because they spend time on our campus. Then we’ve realized the potential of athletics at Notre Dame.”

Notre Dame and the Compton family, whose contribution made the facility possible, share Swarbrick’s aspirations. Kevin Compton and his wife, Gayla, are the parents of a Notre Dame grad–Cameron Compton graduated from Notre Dame in 2010–and are part of the ownership group that owns the San Jose Sharks of the National Hockey League. Until their donation, the plan had been to simply renovate the existing hockey facility in the Joyce Center.

Building the new facility has proven to be an excellent decision. Coach Jackson says, “Not just from a physical perspective, but the actual hockey locker room facilities and training facilities certainly have had a huge impact on any kid that walks through our buildings. I think they’re in awe.”

The game-night atmosphere alone is enough to induce that.

“When the band is there and the students are there at full throttle, it’s a pretty intimidating place for a visiting team,” Jackson says.