Construction industry is expecting a strong 2015.

Construction in Northwest Indiana is expected to continue to be strong in 2015, according to executives from major building companies in the area.

All have significant projects that are in various phases of completion and have strong orders on the books for 2015 and the beginning of 2016, they say, admitting that attempting to forecast beyond two years in the construction business is nearly impossible due to shifts in the economy, tax rules and other factors that can affect the demand for commercial projects.

“All counties are sharing in the growth,” says Terry Larson, secretary-treasurer for Larson-Danielson Construction Co., LaPorte. “LaPorte has shown a lot of growth in the last year. We have work in Lake, Porter, LaPorte and St. Joe counties; there are no real pockets of weakness.”

Rick Slagle, president of Majority Builders, South Bend, goes even further, saying that 2015 could be the best in the company’s history, which extends back to 1973. Slagle also credits former Indiana Gov. Mitch Daniels with developing a tax and business environment that attracts businesses from other states and encourages native Hoosier businesses to expand.

“We’re in a better position than any other state in the Midwest,” Slagle adds.

Tony Peuquet, division manager of Chester Construction Services, Valparaiso, also points out that the lending environment has improved, with lenders more willing to make loans to small businesses now that the economy has shown sustained strength. The situation has also given owners more confidence to invest their own cash and to borrow money when necessary.

Other Northwest Indiana commercial construction executives agree, with several projects in various stages of completion and several other projects close to being finalized. None of the construction firms wanted to discuss anything not already under way, but they did share some of their projects that are continuing into 2015.

The evolution of health care is providing builders with opportunities such as assisted living facilities, says Jon Gilmore, president and CEO of Tonn and Blank, Michigan City. Tonn and Blank is building new 100,000-square-foot facilities in Dyer and Crown Point and expects to build a couple more in the next few years.

“I think there is a need for it as the population grows older,” Gilmore says. “It follows the current health care trend of cradle to grave care.”

In that vein, the facility owners look to build in communities with easy access to full-scale hospitals, Gilmore adds.

However, those full-care facilities themselves are changing, with an increasing emphasis on smaller outpatient facilities offering specialized care rather than on the large hospitals that attempt to provide all services for everyone.

For example, another of Tonn and Blank’s projects is a $70 million addition to an existing Franciscan Health facility in Munster that will include a new emergency department and new nursing care. 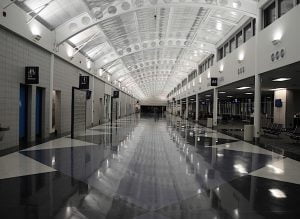 FLYING HIGH Majority Builders was the contractor for an expansion at South Bend Regional Airport.

Tonn and Blank’s work includes much more than health care facilities. The builder is close to completing the new $100 million headquarters for Urschel Laboratories in Chesterton. Urschel is one of the country’s top manufacturers of food cutting machines. Urschel builds machinery for a large range of different industries, but potato processing is a primary part of its vegetable and bakery sector. 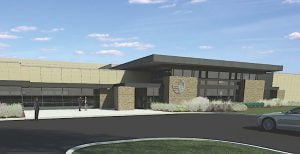 NEW HEADQUARTERS Tonn and Blank is close to completing the new $100 million headquarters for Urschel Laboratories in Chesterton.

“We built their original facility in Valparaiso in 1957; now we are building their new one in the Coffee Creek development in Chesterton,” Gilmore says.

Another important development is a new data center in Valparaiso that will include redundancy for Internet connections, as well as fiber to the site to provide the needed speed and bandwidth, according to Gilmore.

Other Northwest Indiana builders have similarly built long-term relationships with particular owners and developers and in certain industry sectors.

Chester Construction Services is building vet hospitals in Mishawaka, Rensselaer and Highland, ranging from 3,000 to 6,000 square feet. The facilities include one-stop services, with examination rooms, dental facilities, treatment areas for cancer and for other illnesses and other amenities. The buildings continue Chester’s dominance with this kind of facility, says Peuquet. The company has built 60 of those facilities in and around Northwest Indiana since 1988.

“We have a very strong reputation in that area,” Peuquet said. “We’re affiliated with Purdue and other universities with vet schools.”

Chester Construction Services’ largest commercial co-development, still in progress, is the 47-lot Eastport Centre for Commerce and Industry adjacent to the Porter County Airport. There are currently 28 buildings in Eastport Centre including the Valparaiso campus of Ivy Tech Community College and a Social Security Administration office; 23 of those buildings were designed and built by Chester. There are still a few lots available for development at Eastport Centre.

Among recently completed Chester Construction projects are the third phase of Modern Drop Forge in Merrillville and the Valparaiso Public Works city campus.

Catalyst I will be a multi-tenant facility with three to four large tenants as well as 12,000 square feet designed to serve the needs of several post-incubator small businesses, which could rent space for as little as a day or longer. The space includes a large open common area and a cafe. The idea is to facilitate collaboration among tenant businesses. It’s a new building concept in Northwest Indiana, but this has been a successful concept for a portion of Merchandise Mart in Chicago and in other areas.

Catalyst II, which offers a slightly higher clearance than the other building, will house a turbine engine facility that is a joint venture between the University of Notre Dame and General Electric. The university wasn’t always interested in working with the city to draw in and retain business, but now is a valuable draw for the industrial park and for other developments in and around the city.

“Notre Dame has shown a greater interest in working with the city and in starting businesses here,” Slagle says. “Not every area has a Purdue, IU or Notre Dame to draw in businesses.”

Notre Dame has its own business incubator, so the facilities at Catalyst I provide an important, logical next step in the growth of many of these startup companies. Thanks to the participation of Notre Dame, Slagle expects the rest of Ignition Park to fill up quickly and other development in the area to thrive as well. “There is room for a lot of different buildings here,” Slagle says. “It’s been a good year for getting projects.”

In addition to the work at Ignition Park, Majority Builders is also building a retirement building on the edge of Mishawaka, a day care facility in Chesterton and an addition on the Stanley Park on the south side of South Bend.

School construction represents one of a few major projects for Larson-Danielson Construction, which is continuing its three-year, $500 million expansion project for the Lake Central school system. 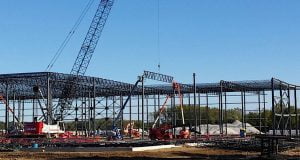 $100 MILLION PROJECT Larson-Danielson Construction is responsible for the new plant for the Howmet division of Alcoa, which manufactures jet engine components.

The company’s biggest project, however, is the new plant for the Howmet division of Alcoa, which manufactures jet engine components. The $100 million facility will produce nickel-based structural components for industry’s best-selling jet engines. The state-of-the-art plant will use the latest in advanced manufacturing technologies, including digital x-ray, 3D printing and robotics.

Another project that Larson Danielson has under contract, but has yet to work out all the parameters, is an expansion of the LaPorte County library system. System officials are still determining if they want to expand through new buildings or through expansions to existing locations, according to Larson.

The Ross Group, Portage, also continues to expand each year, says company president Ross Pangere, who, like other construction company executives, cites the importance of building relationships with developers and of developing a reputation for quality work.

The company’s projects that will continue into 2015 include a facility at a 23-acre site in the AmeriPlex at the Port business park in Portage for MonoSol LLC, which makes water soluble film used in “pods” for dishwashers and washing machines; a 90,000-square-foot office space facility; and an Avalon Manor banquet facility; as well as ongoing work for U.S. Steel, NIPSCO and ArcelorMittal. 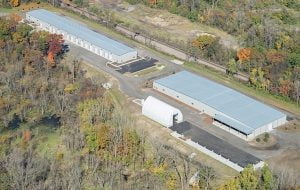 “There’s a trend toward single-source construction with a single builder because that gives the owner better pricing and results in improved delivery,” Pangere says. “If the designer and the builder is the same company, then they take full responsibility if something goes wrong or if something is missing.

Pangere also says the company, like other Northwest Indiana builders, is having challenges finding skilled craftsmen such as ironworkers, carpenters and roofers. When the recession hit a few years ago, fewer young people went into those trades and veteran skilled craftsmen sought out other types of employment as their work dried up.

Most of the above firms have several years, some decades of experience in Northwest Indiana.

MC Industrial, Portage, is a relatively new firm in Northwest Indiana, opening its doors only three years ago, so the firm is still working to spread its wings beyond work in the steel mills and at BP Whiting, says Jerry Schreiber, the company’s business development manager. Most of the work to date has been repairs of existing facilities, ironwork, piping and the like.

“We’re looking to the future,” Schreiber says. “We expect an upturn at the steel mills next year.”

One common design feature among all projects already under way, and for those expected for the next couple of years, is efficient use of space, these construction executives agree.

“Building owners learned a lot from the recession,” Peuquet says. “They really want practicality. There are not any monuments being built. There is nothing fancy. It’s all brick-and-mortar and pre-engineered steel. Owners are looking to maximize what they are receiving. They want the biggest bang for the buck.”

Larson adds that companies are trending toward LED lighting for outdoor use as the prices for the fixtures have dropped significantly. The lights themselves consume less electricity than traditional exterior lighting.