The future is now with advancements in robotic surgery.

John Lynam, DO, had little exposure to robotic surgery during his urology residency. When he started his practice with Porter Physician Group in 2011, it was cutting edge technology.

“Over the next couple of years, it went from a new, cutting edge thing to almost a standard of care,” Lynam says. “What used to be a niche thing became more commonplace.”

He took a year’s leave in 2014 to do a fellowship with preeminent robotic surgeons at the University of Pittsburgh. Now Lynam successfully performs prostate, kidney and bladder surgeries using robotic technology. His patients are sold on the benefits, including less post-operative pain and less down time. 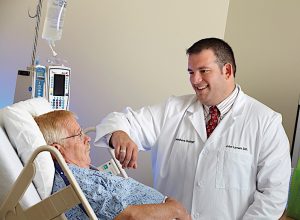 “It’s become so commonplace that people come in asking for it,” Lynam says. “Robotics in the right hands, with a skilled person, is absolutely advantageous. But, on the flip side, just because the technology is there doesn’t mean everybody should do it.”

Clearly, robotic surgery is no longer the stuff of science fiction. In fact, it’s become a viable option for physicians throughout the region because of its distinct advantages.

Robotic technology benefits patients by giving them faster recovery with less pain, shorter hospital stays, lower risk of infection and smaller scars. And the procedures are less physically stressful for surgeons, who sit at a console rather than stand at a surgical table bending over the patient. From there, they can maneuver robotic instruments that are attached to a cart located next to the patient.

The biggest drawback to expanding the use of robotic surgery is the more than $1 million price tag for a robotic system. Intuitive Surgical, based in California, is currently the only company with FDA approval to manufacture surgical robots. The company introduced its da Vinci Surgical System in 1999 and now serves customers around the world. The technology is widely used for cardiac, thoracic, urology, gynecological, colorectal, pediatric and general surgeries, according to the company website.

Laparoscopy was the first minimally invasive surgical procedure, allowing a surgeon to make an incision of up to a half-inch and insert a video camera and surgical instruments into the patient’s body through plastic tubes. Robotic technology takes the technique a step further by giving surgeons a 3D image, similar to that of a 3D movie, and the ability to use tiny robotic arms that have wrists and elbows similar to a surgeon’s hands–giving them the ability to perform delicate procedures in a small space.

Douglas Dedelow, DO, OB/GYN with St. Mary Medical Center in Hobart, began using robotic surgical techniques about five years ago. He performs hysterectomies to address women’s vaginal, uterine and ovarian issues and says his primary goal is to use minimally invasive approaches whenever possible. He says, “The robot has allowed, in my opinion, more surgeons to accomplish things that laparoscopy wasn’t able to do.” 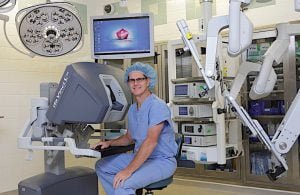 The type of surgery Dedelow uses depends on the patient’s condition. In most cases, he says, women who have robotic surgery are able to drive and resume their regular activities within a week.

Eric Woo, DO, a staff surgeon at Franciscan St. Anthony Health in Crown Point, uses robotic technology for colon cancer, diverticulitis, gall bladder and hernia surgeries. He says the use of robots in general surgery has really taken off over the last two or three years because surgeons can handle difficult cases that previously couldn’t be done with small incisions. 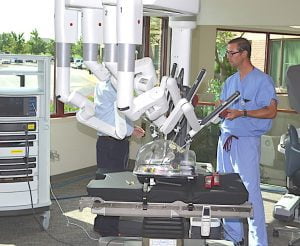 Woo says. “This technology allows me personally to more easily do them with small incisions. The incisions are now so small you can’t fit a finger through them.

“I saw time and time again that you can do tougher cases because the technology is better and it’s better for the patient. It’s less invasive, so there’s a quicker recovery for patients, there’s less risk and less time in the hospital.”

Many patients are already familiar with how robotic surgery works, he says. “They know someone who has had the surgery or they’ve seen a YouTube video.”

Occasionally, surgeons come across patients who think robotic surgery allows surgeons to push a button and watch the robot perform, says Manoj V. Rao, MD, urologist with Methodist Hospitals. But, he finds that most know about robot-assisted surgery and are happy that it’s available to them. 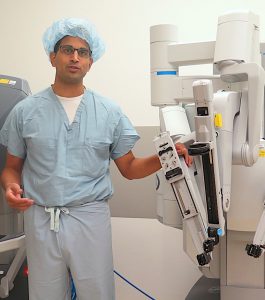 NOT PUSH-BUTTON SURGERY Manoj V.
Rao, MD, with Methodist Hospitals, finds that most patients understand the benefits
of robot-assisted surgery.

Rao was trained to use the da Vinci robot in 2007 during his residency at Loyola University Medical Center and at the Hines VA Hospital in suburban Chicago. “We were fortunate to have robots at the university hospital as well as at the VA Hospital,” Rao says. “For years, ours was one of the few VAs in the country to have the robot.”

The robot is very useful for prostate and kidney surgery, according to Rao. “The prostate, in particular, is in a small confined space in the pelvis. Traditionally we would have to make a much larger incision to access this area and the surgery was done with limited room and visualization. In the last several years, our group has exclusively performed robotic surgery for prostate cancer.”

Rao also uses robots for kidney surgery, where the goal is to remove a cancerous tumor and spare the portion of the kidney that’s healthy. He says. “The robot’s ability to do fine movements allows us to do this surgery better than what we could do with traditional laparoscopic surgery.”

Cluskey joined IU Health La Porte after completing her medical residency more than a year ago and went for training with the da Vinci Surgical System. She says, “It’s a tool that’s been developed to have a better outcome, and I feel lucky that people in the area do have the option.”

Cluskey performs hysterectomies using vaginal, abdominal, laparoscopic or robotic approaches. She says, “Robotic surgery is a very, very good option for some people but it’s not used for all patients.”

Gynecologist Carlton Lyons, MD, with the Northern Indiana Center for Pelvic Health & Gynecology, was initially reluctant to use robots. He saw it as an expensive tool that was being hyped by the manufacturer. Memorial Hospital in South Bend acquired the robot in 2005 and urologists began using it with great success, Lyons says. So he visited a gynecological oncologist in Indianapolis to see the da Vinci Surgical System in action and became a believer.

“You’re seeing things much clearer than you ever have,” he explains. “You get up right next to tissues and organs and cut what you need to cut. There is less tissue damage and less pain and discomfort for patients.”

Lyons is the head of the robotics program at Memorial Hospital and has gone from doing 60 percent traditional abdominal hysterectomies to less than 20 percent. Nearly all of his robotic surgery patients leave the hospital the same day as the surgery. And most are able to resume their normal lives within two to four weeks, compared to up to eight weeks following an abdominal hysterectomy.

“I want my patients out of the hospital as soon as possible because of the risk of infection and potential complications,” Lyons says. “I want them to get back to being professionals and mothers.”

According to Lyons, Intuitive Surgical will soon introduce the new XI robot that can be used for more complicated surgeries than are done right now. And, with the possibility of increased competition in the manufacture of robotic technology, Lyons believes the costs will come down and more health care providers will be able to make it available.

“Robotic surgery is not standard operating procedure because of the cost,” Lyons says, “but now other companies are coming into the market and that should reduce costs.”

Just as computer technology has evolved from the 1950s UNIVAC–an expensive, room-sized computer produced in limited quantity–to today’s much smaller, relatively inexpensive computers, surgeons predict robotic technology will continue to advance. And that could mean even greater benefits for patients and surgeons alike.