A quarter century of growth and change, and a vision for the future.

Northwest Indiana Business Quarterly is celebrating 25 years as Indiana’s leading regional business magazine. To mark this milestone, we asked five area leaders to reflect on the region’s growth over the past 25 years and share their vision for the next 25 years.

Twenty-five years ago, Heather Ennis was attending Purdue. After graduation, she pursued career opportunities where she found them–away from Chesterton, her hometown, and Northwest Indiana. She built a career in product development at major corporations in Indianapolis, Connecticut, Louisville and Cincinnati.

Ennis returned to the area 17 years ago and is using her professional experience to make a difference in the business community. She headed the Duneland Chamber of Commerce then became president and CEO of the Northwest Indiana Forum two years ago. 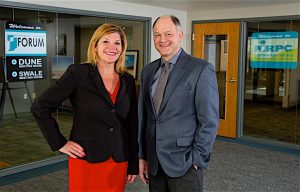 The Northwest Indiana Forum, a non-profit organization started by business leaders in 1979, is a strong advocate for economic development in the seven counties comprising Northwest Indiana or Region 1. Its 130 members range from large companies–such as ArcelorMittal, NIPSCO and BP–to smaller organizations.

“I think we’re a great unifying force,” Ennis says. “We’re working with our regional partners to tear down the silos that separate us. Northwest Indiana is acting more as a region and less like a variety of municipalities that have nothing in common. There’s still going to be competition but when everyone is putting their best foot forward, it’s good for all of us.”

Ennis says the region’s historic reliance on the steel industry has broadened to include agribusiness, solar technology, biomedicine and other currently hot areas. “We’re doing a better job of connecting today’s workforce with opportunities and staying globally competitive,” she says. “It’s no secret we’re in a global war for talent. One of the top needs for every company is its workforce.”

Computer technology has been a game changer, revolutionizing the way we live and work in ways unimaginable 25 years ago. “Twenty-five years ago the world moved at a slower pace and decisions didn’t happen in the blink of an eye,” Ennis says. “Failure wasn’t an option–you just persevered. Now failure is a step toward success. Some of the most interesting things happen by accident.”

Northwest Indiana’s proximity to Chicago–the third largest economy in United States and ninth in world–coupled with the state’s competitive tax environment are strategic advantages, according to Ennis.

“We’re within a day’s drive of 80 percent of the U.S. population,” she says. “People want things quicker and fresher. They don’t want to wait more than two days for anything.”

Over the next 25 years, the region’s access to Lake Michigan will add to its competitiveness, she predicts. “Freshwater is the new gold. Countries all over the world are concerned about their water supply. We’re in a beneficial situation because of the Great Lakes.”

Twenty-five years ago, environmentalists and the business community weren’t on the same page, but today are working hand-in-hand to build on opportunities along lakefront. “We’re more environmentally driven,” Ennis says. “We’re utilizing resources in the area but not squandering them.”

Ennis has a 10-year-old son, Joe, and in 25 years she’d like him to have abundant career opportunities that will keep him living and working in Northwest Indiana. She predicts the Northwest Indiana Forum will continue to be around. “Having an organization focused on the big picture is important.”

Ty Warner, Northwest Indiana Regional Planning Commission (NIRPC) executive director, was completing a master’s degree in urban planning and policy at the University of Illinois Chicago 25 years ago. He’s established a successful career working with regional planning agencies and councils, helping people to “see beyond the boundaries to recognize we’re really all in this together.”

Warner is the fourth director of the 50-year-old NIRPC, a council of government officials from Lake, Porter and La Porte Counties committed to addressing regional issues. NIRPC is a government designated Metropolitan Planning Organization responsible for transportation planning. Warner says NIRPC will handle $1 billion in transportation projects from 2016-19. Projects under consideration are double tracking the South Shore Line to speed travel to and from Chicago, and a West Lake Corridor linking the South Shore to Munster and Dyer.

NIRPC also addresses environmental and community development issues, taking a big picture view of a long-term planning horizon. It spearheaded a multi-year effort that produced the 2040 Comprehensive Regional Plan for economic development, urban renewal and enhanced quality of life across the region. The plan was approved in 2011.

Warner says, “I honestly believe the region is more united now than ever before and is very much aligned behind the 2040 plan and vision of where folks want to go.”

Through NIRPC’s leadership, the Marquette Plan was released in 2005 as a long-term vision for reinvestments in a livable lakefront. “We’ve come a long way in this region to recognize the importance of water resources to economic development and how to protect that resource from an environmental standpoint,” Warner says. “Business development and environmental protection are not mutually exclusive.”

“Chicago is critical to our future,” he says, “and it doesn’t do this region any good to disrespect the relationship with Chicago because we’re dependent on it. We have to make the boundary more permeable.”

Bill Schalliol became executive director of the St. Joseph County Office of Economic Development–a newly created position–last fall. And he’s been on the ground level of economic expansion in St. Joseph County for the past 25 years.

A Purdue graduate, Schalliol became city planner in his hometown of Mishawaka in 1996. It was a time of major expansion along the Grape Road corridor, Main Street corridor and Edison Lakes Parkway.

“Mishawaka became a major economic force in the county,” Schalliol says. “The city had the foresight to develop the infrastructure, with the right utilities in place and the right land zoned.”

While Mishawaka was booming, South Bend was declining. Schalliol joined the economic development department in the City of South Bend in 2001, viewing the city as “a great mixing bowl of opportunity.”

“South Bend in the early 2000s was focused on redevelopment of legacy sites like the Studebaker plant,” he says. “It was an opportunity to pick up big scale projects, like the redevelopment of the Ireland Road corridor on the south side.”

Looking ahead 25 years, Schalliol says Sound Bend is well-positioned to capitalize on information technology and advanced manufacturing. The Renaissance Center, with a state-of-the-art digital information hub at the Union Station Technology Center, will create thousands of high-tech, high-paying jobs, according to Schalliol.

“It will bring opportunities to the community in ways we can’t even begin to imagine,” says Schalliol, who predicts a “new wave of entrepreneurship.”

Now his sights are set on the entire county as he searches for new opportunities. He sees untapped potential in six towns, each with only 500 to 1,700 residents: New Carlisle, Walkerton, North Liberty, Lakeville, Osceola and Roseland.

For example, he says, New Carlisle has “a great little downtown” and is surrounded by thousands of acres of farmland with utilities and rail infrastructure that make it ripe for industrial development. The St. Joe Energy Center project, announced in November, will create a $500 million energy production facility near New Carlisle, with potential for a second phase.

“That’s a $2 billion development in a town of 1,100 people,” Schalliol says. “We can bring in high-skill, high pay jobs and add value to the greater region.”

“Parochialism is not working anymore,” he says. “One town can’t stand alone. It’s only politicians who look at lines on a map. It’s the political boundaries that can hold you back.”

Linda Woloshansky believes a well-trained workforce is central to economic development in the region now and over the next 25 years. As president and CEO of the Center of Workforce Innovations, she plays a key role in aligning employers’ needs for skilled workers with the education and training programs that can supply qualified employees.

Woloshansky was director of the Kankakee Valley Job Training program 25 years ago. At the time, she says, communities operated in isolation and the conventional wisdom was: “If someone else does well, it reflects on you not doing well.”

Driven by a decade of declining resources, communities are focusing on efficiency and collaboration. “As we’ve studied other regions and other countries,” she says, “we see that working more effectively as a region helps everyone.”

Woloshansky has seen air and water quality improve dramatically over the last 25 years. She recalls driving north on I-65 when, “the sun would be shining and the air was clean then suddenly you could see the particles (pollution) in the air. Now that’s not the case.”

She credits the change to technological advances that have allowed industries to be more environmentally friendly. “And technology has improved the quality of jobs,” she says. “It requires people to have more skills and higher levels of education. An educated workforce will bring more companies here.”

Woloshansky views Northwest Indiana as one community and, she says, “In the next 25 years, this community is going to change even more drastically. I see us all moving in the same direction no matter where you live.”

“I would say the great asset to the unification of the two campuses is for the Purdue University system to be able to identify and direct resources more carefully throughout the Northwest Indiana region,” he says. “Clearly what we have seen is, when we’re in competition, we’re expending more resources to get the same market of students.”

A key part of the chancellor’s job is to build business and community relationships. Keon keeps his finger on the pulse through his involvement with the Northwest Indiana Forum, the Alliance for Regional Development and the One Region organization.

“We need to make sure what we’re doing as a university is sufficient to meet the needs of businesses in our area,” Keon says. “We want to be in tune with them to ensure we’re putting students out into the labor market who are prepared.”

He’d like to keep talented people in the area by bringing in new industries and white collar career options.

“I’m concerned that we’re losing young people who might otherwise decide to settle here but can’t find the kinds of jobs they see as appropriate,” Keon says.

Regarding community relations he says, “We exist as part of the community. It’s important to be good partners with the cities and towns that surround us.”

These five people are a few of the many leaders who are united in collaborative efforts to strengthen the economic vitality and quality of life in a region of Indiana that has abundant resources, a strategic location and a strong belief in a bright future. Northwest Indiana Business Quarterly looks forward to the ongoing opportunity to shine a spotlight on the ideas and initiatives that are driving us forward. 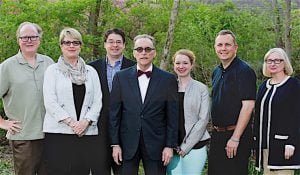