John Phair leads Holladay Properties in creating headlines and jobs across much of Indiana.

Hardly a week goes by when Holladay Properties isn’t in the news.

Whether it’s opening new commercial complex to construction of a new hotel location, Holladay Properties is involved in many business dealings across the northern part of the state and beyond.

“We’re into vertical integration these days. Kind of like soup to nuts in the real estate development area,” says John T. Phair, managing partner, president and CEO of the South Bend-based Holladay Properties. “You have to have a little vision, creativity and design ability. You have to be able to build it and oversee the management of it. That’s what we try to do in the real estate projects. We conceive it, we build it, we management it and we ultimately sell it.” 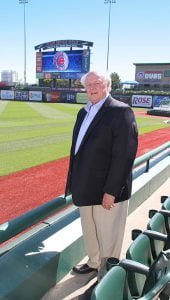 Holladay started in 1952 but broke off into two companies. Holladay Corp. is based in Washington, D.C., while Holladay Properties is based in South Bend.

As the managing partner, Phair oversees 75 commercial properties. According to the firm’s website, Holladay Properties is among the five largest asset management firms of medical office space in the country.

Since 1998, Phair has led the development of approximately $50 million of new construction per year, including three of the four largest mixed-use parks in Indiana.

Of course, Holladay Properties is the firm behind the development of the very successful AmeriPlex business parks in Fort Wayne, Indianapolis, Portage, Merrillville and South Bend. “These are all long-term developments. These are very large, mix-use land developments,” Phair said. “At the Portage site, there are 25 buildings where some 4,000 people go to work every day. And about half that many go to work in Merrillville. The Merrillville complex was a joint venture with the Purdue Research Foundation.”

Phair said AmeriPlex properties offer a variety of land uses, from retail to industrial. He says what makes the properties so successful is the master planning, which includes designing the roads, sidewalks, parking and landscaping long before the businesses start to move in.

“For example, when you construct the first building on 400 acres of property like in Merrillville, it looks grossly oversized as far as streets, setbacks and utilities and drainage,” Phair said. “But the planning pays off big-time when you keep adding other buildings. We plan for trucks, cars and parking. It’s 100 times easier to put all that in at the front end of a project. It’s costly, but it saves you tremendous amounts in the long run and makes it much easier to accommodate almost any kind of client. It’s the master planning that really makes us different.”

In one of its latest projects, Holladay Properties has partnered with Value Place, the largest extended-stay hotel brand in the U.S., to develop 15 new hotel properties in the next four years in the Chicago market.

“This development group has the stamina and resources to aggressively grow with us in this area of the country,” Ron Burgett, executive vice president of development for Value Place, said in a written statement, “Partnering with Holladay in a big way in Chicago is exactly what this brand needs in the upper Midwest. Holladay is a perfect fit.”

Holladay will lead the site selection and development effort and will also utilize its architectural services. “Prioritizing sites and gauging entitlement lead times will be the more challenging aspects of meeting the aggressive development schedule,” says Tim Healy, senior vice president and partner at Holladay Properties.

“Value Place represents a strategic expansion of Holladay’s hotel portfolio,” continues Healy. “We were attracted to the Value Place brand based on its strong executive leadership team and our shared core values.”

“Holladay Properties has built a reputation across Indiana as a first-class developer with two excellent business parks in Northwest Indiana, AmeriPlex at the Port and AmeriPlex the Crossroads,” says Donald L. Babcock, director of economic development for Northern Indiana Public Service Co. “Holladay’s leadership and local representatives are extremely knowledgeable and professional. Holladay investments have made significant contributions to the local tax base and have created thousands of jobs. Northwest Indiana is fortunate to have such a high-quality firm at the table in many communities working to drive our economy forward.”

Holladay has earned multiple development honors over the years. Most recently, the firm won the prestigious NAIOP-Indiana 2013 Developer of the Year award. The award was a nod to Holladay’s numerous development projects in the state, including Bass Pro Shops, multiple AmeriPlex branded business parks, hotels and commercial office space.

For his part, Phair is the former chairman of Trustcorp Mortgage Co. and a current member on the board of 1st Source Bank and investor in several small businesses.

Phair has been involved with numerous civic organizations including the Boys & Girls Club of St. Joseph County, Family & Children’s Center, WNIT Public Television, the South Bend Civic Theatre, the Alliance of Indiana (IU Kelly School of Business) Project Future and the Villages of Indiana. He is a graduate of Marquette University.

As Holladay grows, it’s difficult for Phair to have his hand in every project.

“I’ve become a little less hands-on. It’s hard to be in six or seven locations at the same time. We have somebody in charge in each and every one of them, but I certainly stay involved,” Phair says.

Phair says he hasn’t lost any desire to continue getting involved.

“Our business is a fairly high-risk, high-reward type of business. There’s a thrill in all of that. We also have a family-type atmosphere in our office here where about 250 people work,” Phair says. “I think most of them go home at the end of the day thinking we made the world just a little bit better and hopefully we made some money doing it.”

For Phair, this is the high-water time, as opposed to 2008 when the recession hit. “We made money up until about 2007, then life got very complicated and difficult. I began to wonder after about five years if we were ever going to make money again. But we have and we survived and the last couple of years have been pretty good. I’d like the think the future is pretty bright,” Phair says. “We’ve seen a number of our peers disappear but we’re into our 65th year so we think we at least figured out how to survive if not thrive.”

Although Phair is 65, the Oshkosh, Wisconsin-native says he has no plans to slow down.

“I turn 66 this year. As long as my health is good, my work ethic is going to be good,” Phair says. “This job is fun to do. I still like what I do every day. I can’t wait to come to work in the morning. Some days are better than others but most days I’m pretty happy when I go home, too.”