Great opportunities for freight along the South Shore tracks.
by Rick A. Richards

As a kid growing up in Berkeley, Calif., Andrew Fox had a unique set of babysitters – switch crews for the Southern Pacific Railroad, whose freight yard abutted his dad's steel warehouse business.

Fox would accompany his dad, Charlie, to the office on Saturdays and while his father was finishing up paperwork inside, Fox would stand mesmerized by the flood of train activity out back.

“I didn't want to hang around his office, which wasn't that much fun, so I started hanging out by the railroad tracks,” says Fox. “In fact, my dad would hand me over to a switch crew to babysit me. I got to ride with the crew. I can't imagine anyone doing that today.” 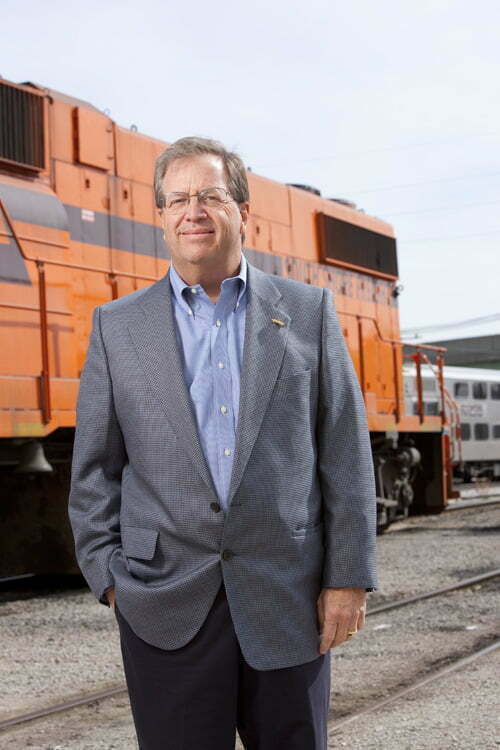 IN THE CHICAGO SPHERE OF INFLUENCE Andrew Fox runs the Chicago South Shore & South Bend Railroad, the freight business based in Michigan City.

But that adventurous time had an impact on Fox. He went to work right out of high school for Southern Pacific Railroad, working in the yard. Now 40 years later, Fox is president of the Chicago South Shore & South Bend Railroad, the freight business based in Michigan City.

South Shore Freight today has a mainline that stretches 75 miles from Kensington on the south side of Chicago east to South Bend. An additional 25 miles of branch line runs from Michigan City through downtown LaPorte to the Kingsbury Industrial Park. In all, South Shore Freight has 127 miles of track, along with trackage rights that allows it to service customers at the Port of Chicago and as far west as Joliet, Ill.

South Shore Freight is part of Anacostia & Pacific, a holding company that operates five short-line railroads around the country. Besides the South Shore, it also has the New York Atlantic on Long Island, the Pacific Harbor Line serving the ports of Los Angeles and Long Beach, the Louisville-Indiana Line between Indianapolis and Louisville, and the Northern Line, which is a 22-mile branch line in St. Cloud, Minn. Fox says the company also has Gulf Coast Switching, which operates switching services around the port in Houston.

Although Fox started with Southern Pacific, one of the nation's largest railroads, after it went through a merger in 1995 he decided to test his fortunes in the short-line business by serving as a consultant for Anacostia & Pacific to put together the deal that created Pacific Harbor Line. In 1997, when PHL went operational, Fox was named PHL's president.

“It's the premier port franchise in the country. That railroad and the ports at Los Angeles and Long Beach handle roughly 40 percent of the nation's imports,” says Fox. “Of that 40 percent, half goes by rail, which means our little railroad touches 20 percent of all imports into this country.” In all, PHL handles about 2 million containers a year.

Fox stayed with PHL for 13 years. While he was a little reluctant to leave southern California for northern Indiana, when Anacostia & Pacific asked him to take over South Shore Freight late last year for the retiring Henry Lampe, Fox jumped at the opportunity.

“When I lived in Chicago in the mid-'70s, I had an interest in the South Shore,” says Fox, who attended Northwestern University in Evanston, Ill. “Frankly, when the owners of Anacostia asked me if I was interested in this job, I leapt at it. It's a completely different assortment of challenges. As much as I loved PHL, I was looking for new challenges, but it was part of the same operation.”

Besides its employees and rolling stock, Fox says the most valuable asset for South Shore Freight is its location. “We're a neutral short line that has access to every other major railroad in the country. We connect with Canadian National in Gary, CSX in Gary, Norfolk Southern in Portage and other railroads like Burlington Northern Santa Fe, Canadian Pacific and Union Pacific through the Beltway Railway in Chicago. As a neutral option, it opens things up for our customers.”

While South Shore Freight shares its main line with the passenger service (which owns the tracks through the state-operated Northern Indiana Commuter Transportation District), Fox points out the relationship is a good one and doesn't pose problems for the freight business.

“The most important thing for us is reliable and consistent service. Now that business is coming back since the recession, we're looking at greater frequency of service,” says Fox. “It's better for our customers and better for us. It's better if we can service them every day, which is why we're looking at investing in more service.”

Fox explains that South Shore Freight just completed work on a $600,000 capital investment to improve the tracks to the Kingsbury Industrial Plant. KIP is a former World War II munitions center that over the past 60 years has been converted into a sprawling industrial park about seven miles south of LaPorte.

“It's still a work in progress,” says Fox. “We have three customers down there. It's steady business for us, but not the kind of development that there could be.”

That could change soon, thanks to a $6 million loan that has been approved by LaPorte County to replace a mile of track at KIP. The money will be paid from the county's Major Moves Construction Fund and repaid over 15 years. The goal of the project, which includes a $3 million pledge from CSX Transportation, is to turn KIP in a regional interchange for CSX trains bringing agricultural goods from Florida and the Southeast to the Chicago market.

Ultimately, the project could include construction of a cold storage warehouse that is expected to be operated by IGS Logistics of Jacksonville, Fla., as its Midwest hub.

Fox says South Shore Freight has a vested interest in promoting development along its rail lines and points out it recently completed the sale of land it owned near New Carlisle to a metal recycler. The parcel was part of 105 acres the railroad owns near the Indiana Toll Road.

“Northwest Indiana has a huge opportunity for development with what is going on in Illinois right now,” says Fox. “Indiana is regarded as a well-run state and more business friendly than Illinois. I think it's a golden opportunity.

“We're in the sphere of influence of Chicago without being there. Logistics companies are reassessing their commitment to Illinois,” says Fox. “Our rail service cuts right through the area. We can be close to that market without having the baggage that goes with Illinois. It's a huge advantage for us.”

Now that Fox and his wife and their two cats have returned to the Midwest, he says he's reconnecting with the region. “My wife and I like to explore the countryside and we had pretty much explored all there was to explore in southern California.

“This is a whole new area – the Amish country, the Lake Michigan shoreline. And now that we're back, I'm getting more involved in Northwestern alumni events.”

But even a return to the Midwest hasn't converted the sports enthusiast in Fox. He's still a San Francisco Giants and San Francisco 49ers fan. “I'll probably go see the Giants when they come to Wrigley Field,” he says.

He and his wife even explore the passenger side of railroading, taking weekend trips to places like Albany, N.Y.

“We're also reconnecting with the South Shore passenger trains,” says Fox. “People automatically think of the passenger service when they hear South Shore, but it's funny because if you ride the train, you can't miss the freight cars.

“That's one of the challenges I have right now because the confusion is understandable,” says Fox. “We are the corporate successor to the historic South Shore Line. We are the same company it has always been. We just don't happen to run a passenger service anymore.”