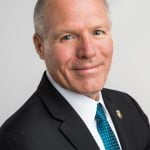 Mark Heckler, who has served as president of Valparaiso University since 2008, will step down from the post.

An Aug. 9 statement from the university said Heckler recommended to college’s board of directors to begin a search for a new president to lead the school. Heckler told the board he will continue to serve as president until a replacement is named and can take over the office.

“It may take time to search, hire and effectively transition to the next president,” Heckler said. “Therefore, the process must begin now to ensure continuity of presidential leadership.”

The university credits Heckler for launching the college’s Institute for Leadership as well as the Presidential Commission for an Inclusive Valparaiso Community.

Frederick Kraegel, chairman of the university’s board, said Heckler has provided steady leadership.

“He has served Valpo selflessly with tireless dedication and the board of directors joins me in expressing our deepest gratitude for his exemplary leadership and service during the past 12 years,” he said.

Heckler has been an educator for four decades as a professor and administrator. He has led several strategic and master planning efforts at the college, which resulted in campus program expansion and construction.

Heckler also launched the university’s first endowment campaign, Forever Valpo: The Campaign for Our Future which has raised more than $215 million through June 30.