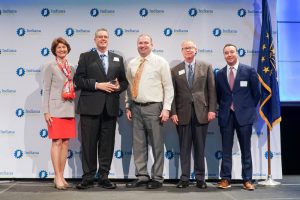 A Valparaiso company was among 14 small businesses recognized by the state during the Small Business Impact Award program May 9 for their contributions to grow and strengthen Indiana’s economy.

Lokring Midwest was started by Steve Burke, an Army veteran, in 2009.

Lokring Midwest has four full-time employees in northwest Indiana and has undergone multiple expansions with the help of the Indiana SBDC. The company plans to break ground on a new warehouse this year, according to the state.

“Small businesses play a critical role in maintaining long-term economic growth in Indiana and supporting good jobs in our communities,” she said. “As a state, we’re committed to building on the entrepreneurial climate that has helped launch companies like the ones being honored today and equipping Hoosier innovators with the tools they need to start and grow their dream businesses.”

Each award winner received business counseling from the Indiana Small Business Development Center, which provides entrepreneurs with guidance and resources on how to start and grow a business, including strategy development, business planning and valuation, export assistance and market research. The awards recognize businesses that received assistance from the Indiana SBDC’s 10 regional offices.

Indiana SBDC unveiled four new, statewide awards this year, recognizing the contributions of businesses that have made a significant economic or community impact in Indiana. The 2019 honorees included:

Innovative Small Business of the Year: Heliponix, Evansville, led by Purdue University graduates Scott Massey and Ivan Ball, is an agbioscience startup that commercialized an automated, aeroponic appliance called a GroPod to allow consumers to grow produce in the convenience of their own homes.

Social Enterprise of the Year: Bitchstix, Indianapolis, founded by Indianapolis-native Emily Kennerk in 2016, is a face and skin care company selling lip balms and skin products made with organic, environmentally-friendly ingredients. assault prevention programs to receive charitable support from the company.

Veteran Small Business of the Year: Hotel Tango Artisan Distillery, Indianapolis, is the first combat-disabled, veteran-owned distillery in the nation and the first artisan distillery in Indianapolis since Prohibition. The company’s name was inspired by owner Travis Barnes’ military background, which included three tours in Iraq with the U.S. Marines.

In addition to Lokring Midwest, the other 2019 Small Business Impact Award recipients, based on the Indiana SBDC’s other regional offices include: