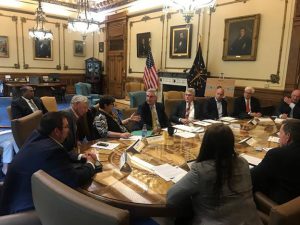 A rainier-than-normal spring has put the state’s annual corn and soybean planting season behind schedule.

Gov. Eric Holcomb last week met with leaders from the state’s agriculture sectors to receive an update on unprecedented weather conditions that have impacted farms and other agriculture businesses statewide.

As of the week of June 16, 84 percent of Indiana’s corn crop and 64 percent of soybeans have been planted, according to the U.S. Department of Agriculture. That is an increase since the beginning of June but both crops are usually at 100 percent planted by now.

“The unprecedented weather and extreme field conditions have put Indiana farmers in a very trying situation,” Holcomb said. “The relentless rainfall has prevented many acres from being planted and in some cases farmers have not been able to plant at all. This not only affects crop producers but those involved in animal production and the businesses that supply them.”

According to USDA, there have only been 27 days suitable for fieldwork in Indiana since late March. That’s 20 days less when compared to the same timeframe in 2018. Heavy, consistent rainfall has saturated fields across the state.

National Oceanic and Atmospheric Administration data shows that the past 12 months have been the wettest on record in the U.S.

Holcomb is working with Indiana State Department of Agriculture Director Bruce Kettler and his staff, and the Indiana Farm Service Agency, to pursue options for agriculture assistance for Indiana farmers. That will include decisions about proceeding with requests for federal assistance as assessments are completed at the county level.

“It’s been an extremely difficult year for farmers in Indiana,” Kettler said. “That’s why we’re working to ensure we’re providing all available options.”