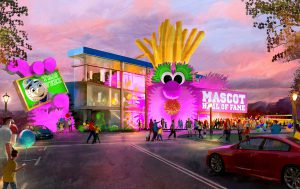 Rendering of the Mascot Hall of Fame and Museum in Whiting.

WHITING – The Schrage family and Centier Bank have committed to a $250,000 founding partner sponsorship to the Mascot Hall of Fame in Whiting set to open later this year.

Henry Schrage founded Centier Bank in Whiting in 1895, then known as Bank of Whiting, nearby what will be the Mascot Hall of Fame’s entrance. Michael Schrage, the fourth-generation of the Schrage family to own the bank, recognizes the symbolism of Centier’s role in helping build the Region.

“Congratulations to Mayor Joseph Stahura and his team for their vision in creating a destination where families from across the country can come and be raving fans in the name of fun,” said Schrage, president and CEO of Centier. “Our support for the Mascot Hall of Fame goes to show that, while we have supported the Northwest Indiana community for over 120 years, we remain committed to supporting this landmark that will serve as an attraction for years to come.”

The 25,000 square-foot Mascot Hall of Fame at Front and 119th streets near Lakefront Park, is in the final construction phase. It will feature fun educational exhibits that emphasize technology, engineering, science, art and mathematics.

The interactive children’s museum is expected to attract more than 50,000 visitors annually.