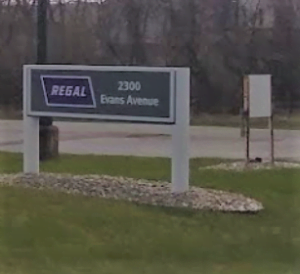 A sign showing the address of Regal Beloit’s facility at 2300 Evans Ave. in Valparaiso.

Wisconsin-based manufacturing giant Regal Beloit says it will discontinue operations in Valparaiso, which would put more than 100 people out of work.

In a statement issued Aug. 27, the company said after reviewing current operations at its plant at 2300 Evans Ave., it intends to discontinue operations at the facility and “exit certain products and move the remaining work to our Monticello, (Ind.) plant.”

Robert Cherry, a representative for Regal Beloit, which employs about 24,000 throughout its global operations, in an Aug. 28 email to Northwest Indiana Business Magazine, said the company was still in the collective bargaining process with the International Association of Machinists Local 2018, which represents about 130 workers at the plant, and could not comment when asked about when the Valparaiso plant would close or how many employees would be affected.

“This was not a decision that we made lightly, and a number of factors were considered including customer orders, inventory levels and overall plant efficiency,” Regal Beloit said in a statement. “We are committed to further discussions with the union within the collective bargaining process (and) we will continue to rely on our contingency plan in order to provide our customers with the highest quality products and service.”

News reports of the plant closure put the total of affected workers up to 170, though Cherry would not verify the number. A representative for the Indiana Department of Workforce Development said Aug. 28 that it had not received a layoff notice from Regal Beloit.

Union workers at the plant have been on strike since late June. Among issues for the union included better wages and affordable health care.