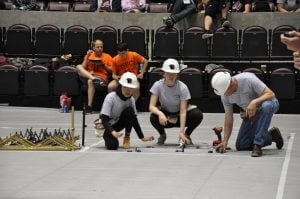 There’s something to be said about exhibiting good teamwork and having a positive work ethic.

Just ask the Purdue University Northwest civil engineering students who competed for a national championship against 40 other colleges in the Student Steel Bridge Competition May 31 to June 1 at Southern Illinois University in Carbondale, Ill.

While the PNW team did not place, members’ demonstration of “outstanding team comradery, professionalism, positive work ethic, and respect for their competition peers” earned them the Robert E. Shaw Jr. Spirit of the Competition Award.

A representative for the American Institute of Steel Construction, one of the competition’s sponsors, said the decision to present the spirit of competition award to PNW came from the national finals judging staff and SSBB rules committee. PNW team members received the award during the June 1 competition banquet.

“The Purdue Northwest team displayed tremendous respect and professionalism during the competition and had a positive attitude in the face of adversity,” members of the competition’s rules committee said in a statement.

The 2019 contest was the first time a team from PNW advanced to the national competition after placing second at the American Institute of Steel Construction Steel Bridge Great Lakes Regional Competition.

This year’s overall winner was Lafayette College of Easton, Penn., which also won the competition in 2018.